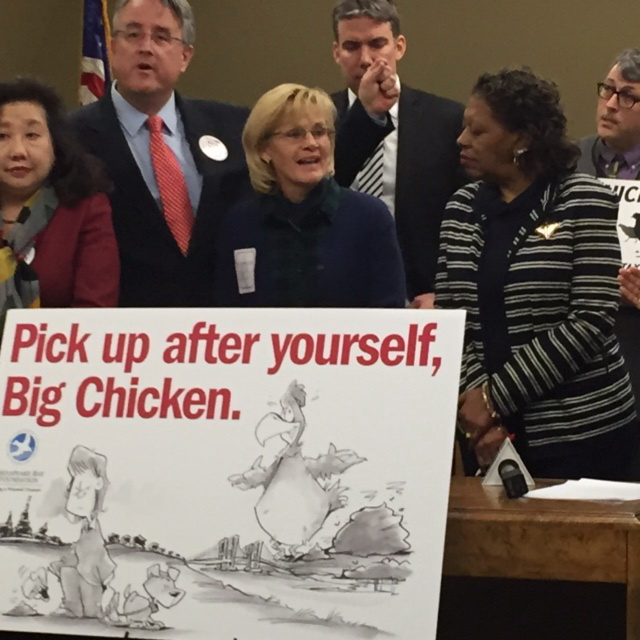 By Josh Magness and Bryan Renbaum 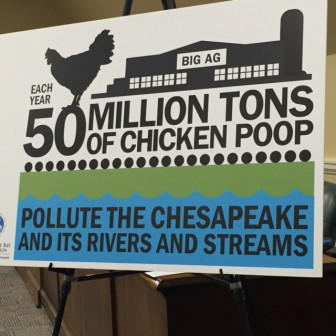 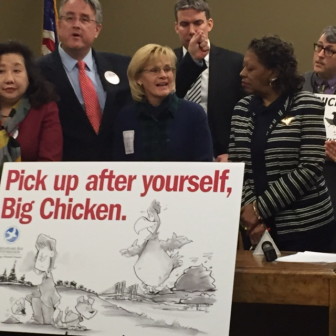 Maryland legislators and contract farmers hired by companies to grow chickens are proposing the Poultry Litter Management Act that would require major animal agriculture companies to pay the cost of properly disposing excess manure on their contract farms.

“It’s a fairness issue, it has an adverse impact on our environment and we need to clean it up,” said Sen. Joan Carter Conway, D-Baltimore, “and those individuals who are making the mess need to clean up the mess.”

The bill, SB496, is a response to what many environmentalists describe as major chicken companies getting a “free ride” as they produce around 228,000 tons of excess manure in the state each year but are not mandated to pay for the environmental costs of moving that waste.

“I don’t know if people realize that the 300-plus million chickens raised annually on Maryland’s Eastern Shore create more waste than everyone else who lives in Maryland,” said Sen. Richard Madaleno, D-Montgomery, lead sponsor of the bill.

Julie DeYoung, a spokeswoman for Perdue Farms, pushed back against the notion that the company — an animal agriculture business based in Salisbury that contracts with 265 poultry producers in the state — requires their contract farms to pay to dispose poultry litter.

“For nearly 15 years through our Perdue AgriRecycle organic fertilizer facility, we have been the only poultry company in the Chesapeake Bay region that provides an environmentally responsible alternative to land application,” DeYoung wrote in an e-mail. “Those who claim that Perdue is putting the responsibility for poultry litter on our farmers are choosing to ignore this fact.”

The cost of removing the manure, and subsequent runoff into the Chesapeake Bay, has traditionally been shifted to contract farmers and taxpayers, lawmakers and environmental advocates said Tuesday.

Maryland taxpayers have contributed $767 million to clean up the bay since 2004, according to a report from the Maryland Bay Restoration Fund Advisory Committee.

Carol Morison, who was previously a poultry farmer spoke in favor of the bill. Morison said she is now an “independent farmer” who produces fresh eggs, which she “sells to Whole Foods in Annapolis.” (CORRECTED Morison with one R)

She also acknowledged that she had once been “part of the problem,” largely because the company for which she worked backed her into a corner and effectively made her solely responsible for waste disposal. However, Morison subsequently explained that as a contractor the company owned the chickens, not her.

“We’re not taking away any fertilizers” or “valuable things that farmers use for growing tools.”

Responding to the proposal, Katie Ward, communications specialist for the Maryland Farm Bureau, declined to comment on the bill directly, but said, “We do believe the concept is premature.”

“We are only in the first of a two-year analysis provided in the [Phosphorus Management Tool] regulations to determine the extent of the need to find new uses for poultry litter. Early analysis from the Maryland Department of Agriculture shows fewer acres will be impacted than originally presumed.”

“We also urge all concerned stakeholders to put time and effort into developing and supporting alternative use technology,” Ward said. “That is what we should be spending our time on in 2016.”

Bills would carve exemptions for teen ‘sexting’ in Maryland