SICK LEAVE PUSH: More than 700,000 Maryland residents do not receive any paid time off when they get sick, according to Working Matters, an advocacy group campaigning for compensated sick days. Senate Majority Leader Catherine Pugh is introducing a bill that would allow full-time workers to earn an hour of paid time off for every 30 hours they work, earning up to seven days of paid time off, reports CNS’s Rachel Bluth.

TAX BREAKS & TERRORISM: Calling President Barack Obama’s planned visit to a Baltimore mosque today an endorsement of terrorism, a Republican lawmaker from Frederick County proposed legislation that would prohibit religious organizations with “known ties to terrorism” from claiming tax breaks, Michael Dresser of the Sun reports. Del. David Vogt, who is seeking the Republican nomination to Congress in the Sixth District, announced plans to introduce the bill.

CHICKEN POOP CLEANUP BURDEN: CNS’s Josh Magness and Bryan Renbaum and MarylandReporter.com report that Maryland legislators and contract farmers hired by companies to grow chickens are proposing the Poultry Litter Management Act that would require major animal agriculture companies to pay the cost of properly disposing excess manure on their contract farms. “It’s a fairness issue, it has an adverse impact on our environment and we need to clean it up,” said Sen. Joan Carter Conway, D-Baltimore, “and those individuals who are making the mess need to clean up the mess.”

ENVIRONMENT DEPT. FACES SUIT: After losing her campground business to decades of raw sewage contamination, the Maryland Court of Appeals has ruled 4-3 that Gail Litz of Goldsboro in Caroline County can finally sue Maryland Department of the Environment for not enforcing a consent order that could have saved it, Dan Menefee reports in the Kent Guardian.

RAW MILK SALES: Maryland lawmakers are considering a measure to allow dairy farmers to sell unpasteurized milk, but only to consumers who have part ownership of the cows. The exemption would still prevent raw milk from being sold to restaurants, grocery stores or wholesalers, reports Elisha Sauers for the Annapolis Capital. If this sounds familiar, that may be because raw milk advocates have come before the legislature in some shape or form for several years.

‘DWYER AMENDMENT’ DIES: We missed this item from last week in the Annapolis Capital:  Elisha Sauers reports that Anne Arundel Sen. Bryan Simonaire was unsuccessful Friday when he proposed to strip Senate President Mike Miller of his authority to take away voting power from any other state senator without two-thirds approval from the body. Simonaire’s measure, known by some as the “Dwyer amendment,” was based on the experience of former Republican Del. Don Dwyer two years ago.

HOGAN’S 2nd STATE OF STATE: His tone. The Democrats’ response. These are just two of the five things to watch as Gov. Larry Hogan will deliver his second State of the State speech at noon today, Erin Cox writes in the Sun.

FREDERICK PUSHES FOR STATE BONDS: Frederick County lawmakers are putting their weight behind proposals for state bond funding for local projects, though it will take some more political maneuvering before the money will be available, reports Danielle Gaines in the Frederick News Post. Frederick County’s General Assembly delegation voted last week to support bond bills introduced by Dels. Karen Lewis Young and Carol Krimm, Democrats who represent District 3A.

TOWSON PARKLAND FUNDING: Two state legislators are filing bond bills to help Baltimore County buy property owned by Radebaugh Florist & Greenhouses, in Towson, for use as a county park. State Sen. James Brochin said last week he filed a bill in the General Assembly seeking up to $200,000 “at the request of the community,” and that the legislation would require matching funds from the county or the community. Brochin’s bill authorizes a state loan called the Radebaugh Park Loan of 2016, and the issuance and sale of bonds, Larry Perl reports for the Towson Times.

STATE OK’s CHOPTANK CENTER: A project 14 years in the making took a major step forward in January when the state of Maryland approved the town of Denton’s plan to build the Choptank River Heritage and Visitors Center along the Choptank River at Crouse Park in Denton, writes Dustin Holt in the Easton Star Democrat.

TRONE FIRES CAMPAIGN STAFFERS: Two staff members and a supervisor working for businessman David Trone’s recently launched congressional campaign attempted to plant themselves as spies in the offices of his leading opponents, and have been fired by the Trone campaign, writes John Fritze for the Sun.

REP. CUMMINGS TO SEEK RE-ELECTION: U.S. Rep. Elijah E. Cummings, the popular Baltimore congressman who has been weighing whether to run for Senate for nearly a year, has decided to seek re-election to the House instead — averting a shakeup in the contest to replace Sen. Barbara A. Mikulski, John Fritze of the Sun reports. 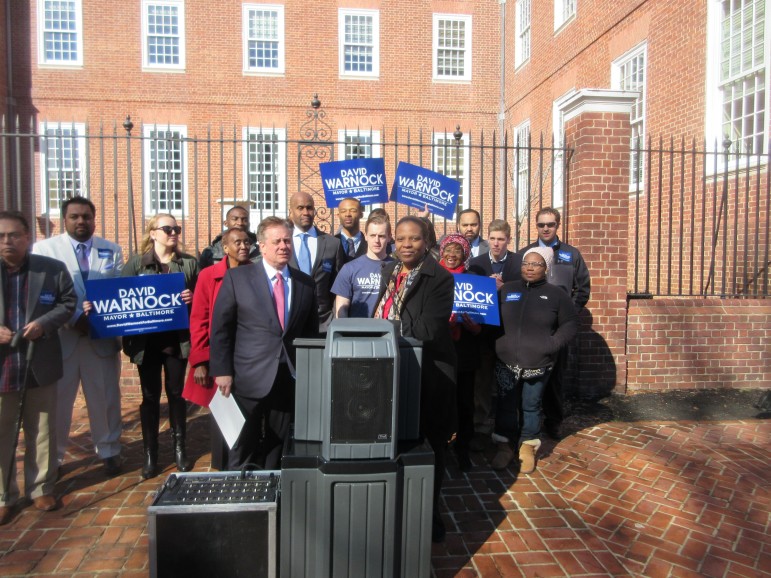 GLADDEN ENDORSES WARNOCK: Sen. Lisa Gladden, a Baltimore Democrat, endorsed businessman David Warnock for mayor of Baltimore, a move that she admitted was unpopular with her colleagues. “I don’t know David Warnock … but I believe Baltimore needs David Warnock,” Gladden said. Sen. Cathy Pugh, the Senate majority leader, is also running for mayor in a crowded field. “I know [Rep. Elijah Cummings] is incredibly disappointed with me,” she said. “I think you’ve got to do what is right.” Warnock, a philanthropist who co-founded the Green Street Academy, a public charter school in the city, unveiled his education plan.

ON O’MALLEY, PAST & FUTURE: Former Gov. Martin O’Malley’s future will be easier to predict if a Democrat wins the White House — particularly if it is Hillary Clinton, a onetime ally. In that case, O’Malley could reasonably be considered for a position in Clinton’s Cabinet — as secretary of homeland security, for instance, or transportation, writes John Fritze for the Sun.