SPANNING THE BAY: Armed with new data showing summer backups heading east will reach 13 miles in 2040, some legislators believe it’s time to get serious about expanding the Bay Bridge project. Sen. James Mathias said Maryland can’t keep stalling. This session Mathias, along with Sen. John Astle,  is sponsoring a bill he believes would put the state in a better position to get federal money to upgrade the Bay Bridge. The legislation would push the Maryland Transportation Authority to set aside about $1.75 million per year for an environmental study, Elisha Sauers of the Annapolis Capital reports.

CAMERAS IN SOME COURTS: Cameras are barred from criminal court proceedings in Maryland, but a bill introduced in the House of Delegates seeks to allow media representatives to record criminal sentencing proceedings with permission of the court, Heather Cobun of the Daily Record reports.

SAVING DECIMATED BEE POPULATION: In response to increasing evidence that certain pesticides are wiping out bee populations, Maryland lawmakers have reintroduced a bill that will restrict sales of some of the chemicals, Anamika Roy reports in the Daily Record.

PAPER BALLOTS READY, VOTERS NOT: Maryland’s new paper ballot system will be available statewide for April’s elections, but officials said Friday they are worried that voters won’t know how to use them in time, adding to election day-wait times, CNS’s Rachel Bluth reports in MarylandReporter.com.

SHANK MOVES TO DEPUTY CHIEF OF STAFF: Gov. Larry Hogan said Friday he is giving his top adviser on criminal justice an influential position in his State House office. Christopher B. Shank, who heads the Governor’s Office of Crime Control and Prevention, will become deputy chief of staff. Shank joined the Hogan administration a year ago after serving 16 years in the General Assembly representing Washington County — 12 in the House of Delegates and four in the Senate, writes Michael Dresser in the Sun.

JUDGE APPOINTMENTS: Gov. Larry Hogan announced the appointment Friday of four circuit court judges, including three to the bench in Prince George’s County, according to the Daily Record.

CHANGE REDISTRICTING METHOD: The editorial board of the Washington Post urges the state legislature to change the way it redistricts. writing that for the first time in years, Maryland has a real opportunity to shed its grotesquely gerrymandered electoral districts, for both Congress and the state legislature, and replace them with maps drawn by an independent commission whose purpose would be to elevate the interests of voters over those of insider politicians. Incumbent Democrats, who rule the roost in the status quo, are threatening to block just such a change, in the form of a constitutional amendment proposed Tuesday by Gov. Larry Hogan, a Republican. They would be foolish to do so.

THE WEEK AHEAD: In the Post, Fenit Nirappil gives a preview of the third full week of Maryland’s 2016 legislative session including Gov. Larry Hogan’s State of the State address and the Senate taking up his nominations.

HOGAN’S 2nd STATE OF STATE: The words that come out of Gov. Larry Hogan’s mouth at noon Wednesday could have a tremendous impact on his second year in office and his relationship with the legislature’s majority party, writes Bryan Sears in the Daily Record.

MILLER PUSHES APPOINTMENT: Senate President Mike Miller ratcheted up the pressure on Gov. Larry Hogan Friday to expedite the appointment of a new Democratic senator from Montgomery County to fill a vacancy in the 47-member body, Michael Dresser of the Sun reports. Del. Craig J. Zucker was chosen by the county Democratic Central Committee  a week ago Thursday to fill the seat left empty by the the resignation of Sen. Karen Montgomery.

‘PRESS RELEASE’ PLANNING: Gov. Larry Hogan came into Baltimore City  late last year with an “unprecedented” assault on the vexing problem of “vacants” – getting rid of the empty houses, that is, writes Fraser Smith for the Daily Record. The headlines promised a new $700-million campaign to be paired with a new approach to redevelopment. But when the governor’s budget landed, it was difficult if not impossible to see how much money had been committed to the press release plan. About $70 million seems to be the right number. Additional money will be come from grant money already in hand. That money would be redirected to the reclamation project – and apparently on a year-by-year basis. The gaudy $700 million number began to fade.

PROPERTY TAX CREDITS FOR 1st RESPONDERS: Baltimore City lawmakers in Annapolis are endorsing Mayor Stephanie Rawlings-Blake’s plan to provide a property tax credit for police and firefighters who buy homes in the city, a policy some say would improve first responders’ relationship with the community. The General Assembly is expected to approve the city’s request before the session ends in April. The Baltimore House delegation’s unanimous approval of Rawlings-Blake’s proposal Friday was the first step toward passage, Michael Dresser and Justin Fenton report in the Sun.

SEX ASSAULT EDUCATION: The Maryland Coalition Against Sexual Assault has been working with Charles County advocates to increase education and awareness about sexual assault and abuse in all of Maryland schools with House Bill 72, writes Tiffany Watson in the Enquirer Gazette.

CUBA PRISONER HONORED: The Marylander who spent five years as a political prisoner in Cuba called for faster progress toward reconciliation with the Communist nation as he was honored Friday by the Maryland Senate, Michael Dresser of the Sun reports.

MOLD IN HO CO SCHOOLS: The mold controversy in Howard County public schools has reached the state’s highest office, writes Lisa Philip in the Howard County Times. At a meeting of the state Board of Public Works Wednesday, Gov. Hogan said that he, Comptroller Franchot and Treasurer Nancy Kopp had received many “letters of concern” from parents, a school board member and state Del. Warren Miller about maintenance and mold issues. Hogan and Franchot questioned Superintendent Renee Foose extensively about these concerns.

POLAR BEAR PLUNGE: State lawmakers have plenty to disagree about during this year’s legislative session, but one cause united them Saturday: the annual Polar Bear Plunge in the Chesapeake Bay, Josh Hicks of the Post writes. Two Democrats and one Republican from the House of Delegates had planned to test their courage in the bone-chilling event at Sandy Point State Park, helping to raise money and awareness for the Special Olympics. 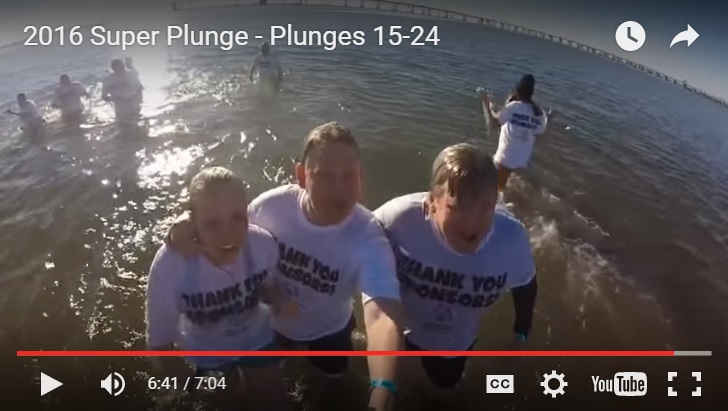 That’s Howard County Executive Allan Kittleman, center, taking a selfie toward the end of his Super Plunge — once an hour for 24 — in a frame from a seven-minute video on his personal Facebook page.

MCDONOUGH FILES HOUSE CANDIDACY: Del. Pat McDonough of Baltimore County filed his candidacy for the U.S. House with the State Board of Elections on Friday, criticizing incumbent Rep. Dutch Ruppersberger of being too cozy with the Obama administration, and suggesting that the Democrat had “lost touch” with the district’s voters.

MONEY POURS IN FOR MATTHEWS: First-time candidate Kathleen Matthews is pulling away from the rest of the 8th Congressional District field in the race for money, besting state Sen. Jamie Raskin for the second straight quarter, campaign finance reports filed late Sunday show, reports John Fritze in the Sun. But the decision by wealthy businessman David Trone to enter the race late — and spend significant sums early on — may blunt that advantage in the state’s open House contest.

CANDIDATE FOCUSES ON PERSONAL STORY: Maryland 8th Congressional District primary candidate Joel Rubin uses his first ad to frame the issue of women’s reproductive rights around a harrowing personal story: the forced sterilization of his Sri Lankan-American mother-in-law at a Pullman, Wash., hospital in 1972, Bill Turque writes in the Post.

O’MALLEY’S SLOW RUN: Here’s the good news for former Gov. Martin O’Malley: Iowa is not America in miniature. Neither is New Hampshire. Each state has an abysmal record for picking the next president, writes Barry Rascovar in MarylandReporter.com. Getting humiliated in the first two primary states – which seems highly likely for O’Malley starting tonight — may not signal the demise of his 2016 quest. His carefully packaged liberal message is pegged to appeal to the broad Democratic Party base, which is not well represented in either Iowa or New Hampshire.

SPONG RESIGNS AS WA CO COMMISSIONER: Facing a potentially unfavorable result this coming week, Vincent G. “Woody” Spong has resigned from his appointed post on the Washington County Board of Commissioners. CJ Lovelace of the Hagerstown Herald Mail reports that Murray said the county received a letter from Spong about noon on Friday, saying his resignation was effective immediately.

‘OUTSIDERS’ FOR CITY MAYOR: An array of career politicians and political novices – some touting knowledge of how Baltimore City government works, others vowing to blow “the culture of city government” up – perched on metal stools for a mayoral forum in Station North. With corporate cash already flooding the campaign and conventional wisdom giving an early advantage to former mayor Sheila Dixon and other incumbents, the outsiders urged the crowd of more than 250 to give them a chance, writes Fern Shen for Baltimore Brew.

MO CO LIQUOR RESIGNATION: George Griffin is no longer the director of Montgomery County’s Department of Liquor Control, Andrew Metcalf of Bethesda Beat reports. The DLC handles the wholesale distribution of all alcohol in the county and runs the county’s 25 retail stores, which control the sales of all spirits in the county. This unique alcohol monopoly has come under intense scrutiny recently, with some lawmakers, led by state Del. Bill Frick (D-Bethesda), supporting state legislation that would call for a referendum to let voters decide if the monopoly should remain.

OBAMA TO VISIT MD MOSQUE: President Barack Obama will visit a mosque in Baltimore County on Wednesday amid growing concern about hostility directed toward Muslim Americans. It will be Obama’s first visit to an American mosque as president, reports John Fritze for the Sun. Obama will deliver remarks at the Islamic Society of Baltimore, located in Catonsville, and will meet with community members there to discuss religious freedom, White House officials said Saturday.