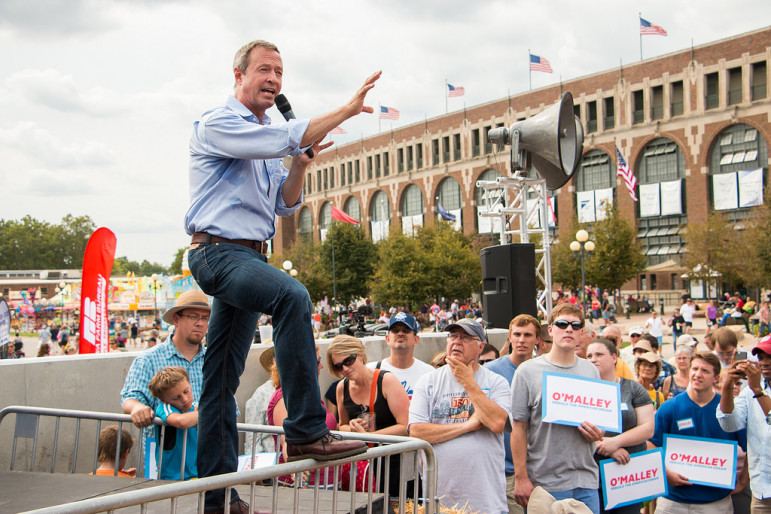 Here’s the good news for former Maryland Gov. Martin O’Malley: Iowa is not America in miniature. Neither is New Hampshire. Each state has an abysmal record for picking the next president.

Getting humiliated in the first two primary states – which seems highly likely for O’Malley starting tonight—may not signal the demise of his 2016 quest. His carefully packaged liberal message is pegged to appeal to the broad Democratic Party base, which is not well represented in either Iowa or New Hampshire.

On the other hand, miracles can happen in these early primaries. Long-odds challengers have emerged victorious more often than not. Indeed, two times out of three, the Iowa winner is usually the underdog. It happens even more often in New Hampshire.

That’s a positive for O’Malley, though he’s so far back in the polls it is difficult to see him emerging out front.

No bump in recent polls

The Des Moines Register-Bloomberg poll on Sunday gave O’Malley 3% of the Iowa vote. Other recent polls gave him 5% and 7%. Meanwhile, O’Malley is polling 2% in New Hampshire. In the next primary state, South Carolina, O’Malley also is running at 2%.

Even in neighboring Pennsylvania, where the ex-Maryland governor should be better known and respected by Democratic voters, he’s getting just 2% in a recent poll.

O’Malley can take modest comfort from a New York Times editorial endorsing Hillary Clinton for the Iowa primary caucus. In the editorial, the Time editors call him “a personable and reasonable liberal.”

Unfortunately, the rest of that sentence indicates how far he has to go to be taken seriously on the national stage. The Times editorial concludes O’Malley “seems more suited for the jobs he has already had – governor of Maryland and mayor of Baltimore – than for president.”

Newspaper endorsements and polls can be misleading, though.

An editorial-page backing doesn’t carry the weight with voters it once did.

And polls can prove highly deceptive in a caucus state like Iowa.

Voter sentiment in a telephone poll becomes meaningless in Iowa unless the voter is determined enough to attend one of 1,681 precinct caucuses Monday evening that could last for hours.

In Iowa, it will be candidates with the most hard-core followers who have the best shot at pulling a surprise. Precinct-level organizing is absolutely essential, too. The Iowa event is long, drawn-out and a test on voters’ patience and commitment to a candidate.

That’s why Hillary Clinton may have a decided edge over Bernie Sanders and O’Malley. The depth of Sanders’ enthusiastic support among college-age students and disenchanted Democrats is one of the great unknowns.

Grass-roots organizing and caucus-level attendance could be key on the Republican side, too. That’s where Sen. Ted Cruz of Texas could surprise front-runner billionaire Donald Trump.

The same holds for Sen. Marco Rubio of Florida, whose organizational strength and quiet determination to challenge Cruz among Iowa’s large bloc of evangelical Republicans could lead to a larger-than-expected showing.

As for retired Hopkins pediatric neurosurgeon Ben Carson, his meteoric rise in the polls has been eclipsed by his meteoric fall. His off-point remarks in the last Republican debate in Iowa emphasized how unready he is to live in the White House. Voters in polls seem to sense that, too.

Regardless of the outcome, losing candidates can take solace from the fact that Iowa and New Hampshire are hardly indicators of the eventual outcome.

If those two state primaries were true stepping stones to 1600 Pennsylvania Avenue, the list of presidents by now would include Iowa and New Hampshire winners such as Rick Santorum, Mike Huckabee, Paul Tsongas, Gary Hart, Tom Harkin and Richard Gephardt.

The media has made a BIG DEAL of these two early primary states. Inflating the importance of Iowa and New Hampshire has been great for TV ratings and created a surprise bonanza of advertising dollars.

Yet the truth is that this is deceptive reporting by the media. Television commentators are vastly overstating the role the two states play in the nominating process.

In the larger presidential election picture, Iowa and New Hampshire are minor starting points. We’ve got a long way to go.