CITY TEAR-DOWN PROGRAM: Calling Baltimore’s abandoned rowhouses “hotbeds for crime,” Gov. Larry Hogan on Tuesday announced a nearly $700 million plan to tear down thousands of vacant buildings and replace them with new developments — a level of investment in Baltimore’s poorest neighborhoods some say is unprecedented, Luke Broadwater and Yvonne Wenger report for the Sun. 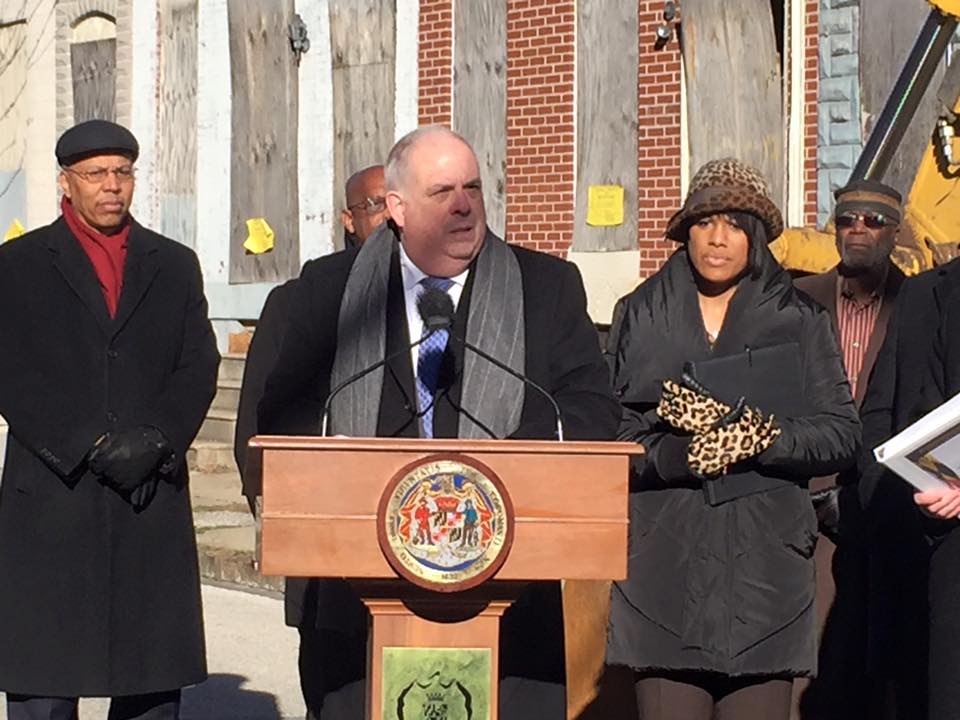 Gov. Larry Hogan announces plan to take down vacant homes with Mayor Stephanie Rawlings-Blake beside him.

RETIREMENT PLAN INCENTIVES: Members of a legislative task force on mandated retirement plans for businesses in Maryland are considering new proposals that could offer tax incentives or impose financial penalties to prod employers to offer approved plans to workers, reports Bryan Sears for the Daily Record.

HADDAWAY MOVED TO HOGAN OFFICE: Gov. Larry Hogan has promoted the former running mate of a rival for the 2014 Republican nomination as part of a staff reshuffle, Michael Dresser of the Sun writes. Jeannie Haddaway-Riccio, who ran for lieutenant governor along with then-Harford County Executive David Craig, will become deputy chief of staff. She previously served as director of intergovernmental affairs, the governor’s chief liaison with local governments.

VENDING MACHINE REFORM: If you tend to get sodas, chips and candy out of vending machines, a group of health advocates wants to you to consider something healthier, writes Daniel Leaderman in the Daily Record. But they don’t want to force you. The Sugar Free Kids Maryland coalition is backing state legislation that will make healthier foods and drinks more common in vending machines on state property.

CUMMINGS RATED EFFECTIVE: Two professors writing in the Washington Post have rated Rep. Elijah Cummings as one of the 10 most effective members of the House of Representatives. At the moment, Cummings has not announced for reelection, but he must decide by Feb. 3, the filing deadline.

WOMEN’S CAUCUS BACKS EDWARDS: A national women’s group endorsed Rep. Donna Edwards’ campaign for Senate on Tuesday as the two Democratic candidates are working to appeal to female voters, John Fritze of the Sun writes. The National Women’s Political Caucus said in a statement that Edwards, of Prince George’s County, has an “impeccable record on women’s rights and a strong track record for effective leadership.”

EDWARDS’ FINANCIAL STRUGGLE: Rep. Donna Edwards wants to make history as the first black female senator from Maryland. But she is struggling to find the money to compete with her primary rival, Rep. Chris Van Hollen, whose connections with donors in the state and nationwide have helped him build a formidable war chest, reports Rachel Weiner in the Post.

THUGS VS OCCUPIERS: David Zurawik, media critic for the Baltimore Sun, addresses U.S. Rep. Edwards’ criticism of the media and how it labels the armed white men who have taken over a federal facility in Oregon compared to protesters after in the aftermath of Freddie Gray’s death.

FICKER IN A FACEBOOK FIGHT: Political blogger Ryan Miner writes about a war of words on Facebook between James Grose, a gun rights advocate, and perennial candidate Robin Ficker, who is running for Congress. While Miner characterizes Ficker’s attitude as the sexist “like a teenage girl,” no one here comes off looking mature.