This is an edited version of a column that appears in the January issue of The Business Monthly. 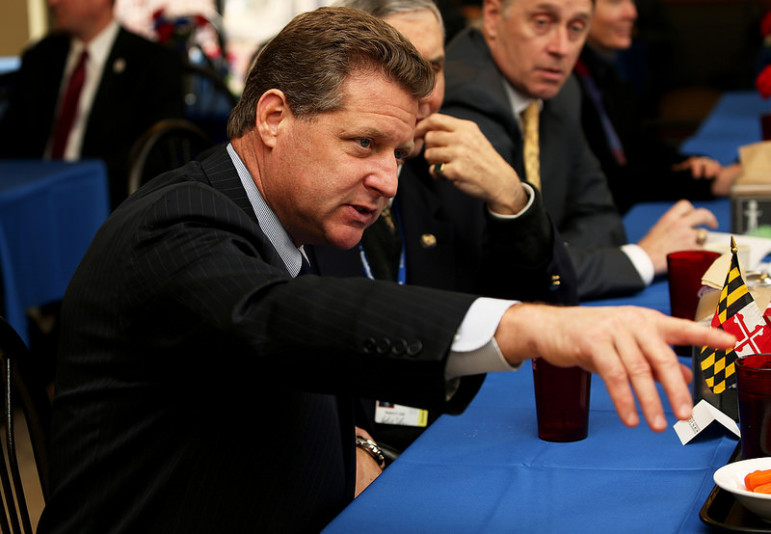 Steve Schuh was gung ho when he took office as Anne Arundel County executive 13 months ago, and he thinks he’s made a good start implementing his campaign promises and transforming county government.

In an interview in his Annapolis office last month, he said he’s not planning to slow the pace of change. Two major consultant reports are due out soon.

One will call for a major revamping of land use, licensing and permits — a decades-long sore point in Anne Arundel — and the other will recommend overhauling the procurement process that Schuh describes as “notoriously inefficient” and “wasteful.”

He’s also added something of a sixth goal to his list of smaller schools, lower taxes, better public safety, cleaner waterways, and more efficient government: a focus on quality of life.

In a half-hour sit down that covered a dozen topics, Schuh assessed his first year, which saw occasionally rocky relations with the Anne Arundel County Council, and ambitious goals for the second year.

Loves job and its authority

Schuh has had mostly successes, with a few stumbles. “I love the job,” he said.

It’s a position that he began campaigning for four years ago. He raised more than $2 million for what turned out to be a hotly contested Republican primary against Laura Neuman and a less competitive general election against Democrat George Johnson.

“It’s a wonderful job … I pinch myself every day …. It’s a Christmas present every day,” said the county executive.

“I’ve been pleasantly surprised by the amount of authority that the framers of the constitution vested in the office,” Schuh said. “If you’re a person that likes to get things done, I have immense authority to get things done. The office is structured like the governor’s office, and the governor of Maryland is the most powerful governor in the United States; and this office parallels that on a miniature scale.

He had fights with the council concerning spending, tax cuts and bond debt, and Republican Council Chairman Jerry Walker turned out to be more of an obstacle than an ally.

The new council chairman, Derek Fink, is a Schuh ally and former business partner, but Schuh doesn’t expect the situation with the council to change very much.

“The chairmanship of the Anne Arundel County Council should not be confused with the speakership of the General Assembly. The chairman of the county council does not speak for the body; he doesn’t make committee appointments. It’s a scheduling job,” he said. “That’s all there is to it.”

The chairman “gets more attention” and has “higher visibility,” but “they don’t make decisions for the body. They don’t have any more influence on legislation than the other six [council members],” he said.

“They’re all equal. And everybody has to get four votes” to pass legislation. “We’ve been able to get our four votes. But it’s not been an easy four votes. We don’t have the luxury of a natural four-vote majority,” even though there are four Republicans and three Democrats, he said. “We came in with a very big agenda to change policies in a very major way. This first year has represented a very major change for county government.”

Schuh did eventually get some taxes reduced and a change in bond terms from 20 years to 30 years, freeing up funds for more capital projects. This lowers annual payments on debt, but increases interest costs, which was the main objection of walker and other council members.

“Our fiscal policies are very conservative,” says Schuh. “We’ve adopted the largest tax cut in county history. We are streamlining government that is much more efficient than it was a year ago.

“We imposed a hiring freeze,” he said. An across the board cut “squeezed $4 million in waste out of county government; I plan on keeping the head count [of county employees] at the current level.”

The state of Maryland has maintained a triple A bond rating on its 15-year bonds for nearly a half-century, and keeping that rating is a bedrock of state policies.

But Schuh doesn’t see much value of maintaining the county’s own AAA rating from Standard & Poor, one of the three rating houses; the other two are AA+ and Aa1.

“By operating toward that [triple A], we’re straight-jacketing the county’s capital budget,” he said. “That’s why there’s been such a long-term underinvestment in roads and schools and bridges. We’ve got a bridge that’s falling apart [over the Patuxent River]. Our police academy is falling apart. There’s a backlog in school construction.”

Schuh said wants to take some of the money freed up for capital spending and use it to improve parks, and access to the waterfront and Chesapeake Bay, as part of his quality of life initiative.

Schuh has already seen drafts of studies to improve two major areas of county government: procurement and land use. Anne Arundel County buys $360 million in goods and services every year.

Estimates are that the county could save $20 million a year on procurement.

“It is a culture that doesn’t put a big emphasis on speed and has a lot of outdated rules and regulations originally put in place years ago to correct a corrupt procurement process,” Schuh said. “We don’t want to see [the old process] return, but that has swung back too far the other way.”

On construction permits, “My goal is to reduce permitting times by half,” he said, “and I think we can achieve it.”

It’s another area where technology is outdated and the review process is done on paper.

One proposal in the consultant study is to create a peer review system to deputize third-party civil engineers to act on behalf of the county in reviewing building permits and construction plans; rather than depend on county employees, a developer, contractor or homeowner could hire a pre-certified engineering firm to handle the process.

“It costs more, but time is money, so it’s worth paying a little extra more on the front end.”

That is probably going to require legislation, Schuh said.

One reason that it takes longer to get permits in the county is the number of layers of review, not just by the county, but by the state’s Critical Areas Commission and the Army Corps of Engineers, when building takes place near the many miles of streams, rivers and the bay.

Much of the county is fully developed; south of Edgewater, it will stay predominantly rural, with no water and sewer lines, and 20-acre lots for homes.

That’s why a historic village called Woodwardville, which lies just south of Odenton, “is going to be the fastest growing part of Anne Arundel County,” said Schuh. “Nobody knows about it; it’s a sleepy little part of Anne Arundel.” It’s name is not even found of standard maps.

“That’s why I want to build a library out there,” he said. “Development in Anne Arundel County is at 11:45 p.m. …Development will come to a close in our lifetime.”

He wants to duplicate some of Howard County’s achievements when it comes to parks, recreation and schools. It has beautiful parks and great bike trails, said Schuh, and “they’ve focused on smaller neighborhood schools for a long time,” as he wants to do.

When it is pointed out that Howard County also has higher income and property tax rates than Anne Arundel, Schuh counters that “the big money is the capital and construction; and we’ve never had any capital. But” he said, “we have the water; they don’t.”