FOUR PURPLE LINE BIDS IN: The Maryland Transit Administration confirmed Tuesday it has received technical proposals from four teams competing to build the Purple Line, reports Andrew Metcalf for Bethesda Beat. The MTA received three of the technical proposals Monday and the last one came in Tuesday, according to Chuck Brown, an MTA spokesman. All four proposals are hundreds of pages. They are not being made public yet because the bid process remains closed, Brown said.

MTA CRITICIZED FOR LACK OF COMPETITIVE BIDDING: The Board of Public Works administered an unusual public rebuke to one of the governor’s own agencies Wednesday as it unanimously turned down a Maryland Transit Administration contract over a lack of competitive bidding, Michael Dresser for the Sun reports. Republican Lt. Gov. Boyd Rutherford, substituting for Gov. Larry Hogan, joined Democratic Comptroller Peter Franchot and Treasurer Nancy Kopp to turn down a proposal to award a four-year, $65 million contract with MJ Management Services for call-a-ride sedan services for disabled customers.

MAGLEV GETS A LEG UP: Maryland’s Public Service Commission has approved the transfer of a long-unused passenger railroad franchise to the backers of a proposed magnetic levitating train, an early step in plans to link Baltimore and Washington, D.C., in as little as 15 minutes, Rick Seltzer writes in the Baltimore Business Journal.

KENT ISLAND PLAN GETS BPW OK: The Board of Public Works granted a controversial wetlands license to K. Hovnanian’s Four Seasons at Kent Island Wednesday in a 2-1 vote, after two previous appearances before the board and a court decision that restrained the three-member panel’s scope of authority, Darcy Costello of CNS writes in MarylandReporter.com. Comptroller Peter Franchot, the sole dissenting vote called the proposed development “irresponsible suburban sprawl.”

THE LOBBYING GAME: Daniel Leaderman of the Daily Record writes about Maryland Maternity Access Coalition, a birth-injury fund advocacy group that has gone before Del. Geraldine Valentino-Smith’s committee through lobbyist Sean Malone. Malone’s company and the coalition have the same address. In a very long story, Leaderman writes that the interwoven situation, which sometimes is “Astroturf,” (false grass-roots organizing) is emblematic of the high-stakes and sometimes secretive business of public policy advocacy in Annapolis, other state capitals and the District of Columbia.

BALANCED BUDGET: Maryland’s state budget is balanced. For now at least, according to a briefing given Wednesday by the legislature’s top budget analyst to House and Senate fiscal leaders. Bryan Sears of the Daily Record writes that the announcement to the joint Spending Affordability Committee means state lawmakers will likely have more to smile about in January when it comes to the budget than they’ve had in recent years.

MO CO PREPS LEGISLATIVE BILLS: Montgomery County’s state representatives are preparing a number of bills pertaining to local issues to introduce in the 2016 session, writes Andrew Metcalf for Bethesda Beat. Among the proposals is the bill already generating a significant amount of controversy — Del. Bill Frick  and five other representatives are sponsoring legislation to enable private distributors to sell alcohol in the county and compete directly with the county’s Department of Liquor Control.

DEMS CRITICAL OF HOGAN VEGAS TRIP: They say what happens in Vegas stays in Vegas, but Maryland Democrats are trying hard to ensure that the politics will be waiting for Gov. Larry Hogan when he returns from a meeting of Republican governors. Hogan left Tuesday to attend the annual Republican Governors Association conference in Sin City. Back home, Patrick Murray, executive director of the Maryland Democratic Party, said the guy who ran as a reformer was just another politician, writes Bryan Sears for the Daily Record.

KEEP PUBLIC FINANCING: Maryland has had a public financing law for gubernatorial elections for decades. But until Larry Hogan opted to use it in his successful bid for governor, it was doing little more than taking up space in the state code. Hogan has introduced a bill in the House of Delegates that would put new life into this democratic alternative for financing campaigns. He believes it’s a worthwhile option for candidates, and “we support his efforts wholeheartedly,” opines the editorial board for the Frederick News Post. 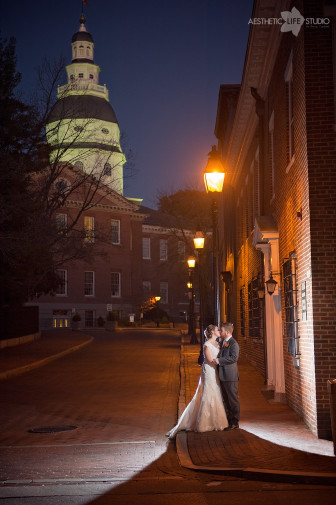 A CAPITOL SHOT:  Len Lazarick of MarylandReporter.com gets personal with readers, showing off a lovely shot of the State House, his favorite to date, that features one of his two beautiful daughters and her new husband on the evening of their wedding.

STATE POLICE UNDER WATER: When State Police divers plunge into the deep in search of evidence or a body they’re always in the dark. “You can’t see anything. We tell school kids it’s like putting on a blindfold and getting in your closet, closing the door, turning out the light, and trying to find your favorite shirt,” said 1st Sgt. Chris Davala, commander of the Underwater Recovery Team. It’s also often cold and dangerous because of hazards found underwater. Pat Furgurson of the Annapolis Capital profiles the job of the State Police dive team.

REPUBLICAN TO CHALLENGE DUTCH: Republican attorney Yuripzy Morgan declared her candidacy Tuesday for the House seat in the 2nd District. The district is made up of parts of northern Anne Arundel, Baltimore, Harford, and Howard counties as well as areas of Baltimore City. It includes the Fort Meade area. The seat is currently held by Dutch Ruppersberger, a Democrat who has been in office since 2002, Christina Jedra writes in the Sun.

8th DISTRICT DEBATE: In a debate filled with appeals to female primary voters but which produced little in the way of verbal fireworks, the seven candidates for the Democratic nomination for the 8th Congressional District faced off Tuesday night at a crowded event sponsored by the Woman’s Democratic Club of Montgomery County, writes Louis Peck for Bethesda Beat.

AIDING DISABLED VETS: About 15 miles away from Salisbury in the town of Quantico lies a 50-acre property with a 20-bed facility that has the sole purpose of aiding disabled veterans. On Friday, Nov. 13, at Annie’s Paramount Steakhouse in the Kent Narrows, former Del. Mike Smigiel invited Jerry Black and his team at the Veteran Support Centers of America  to speak about his Eastern Shore program and how it is helping area veterans, Mike Davis writes in the Bay Times.