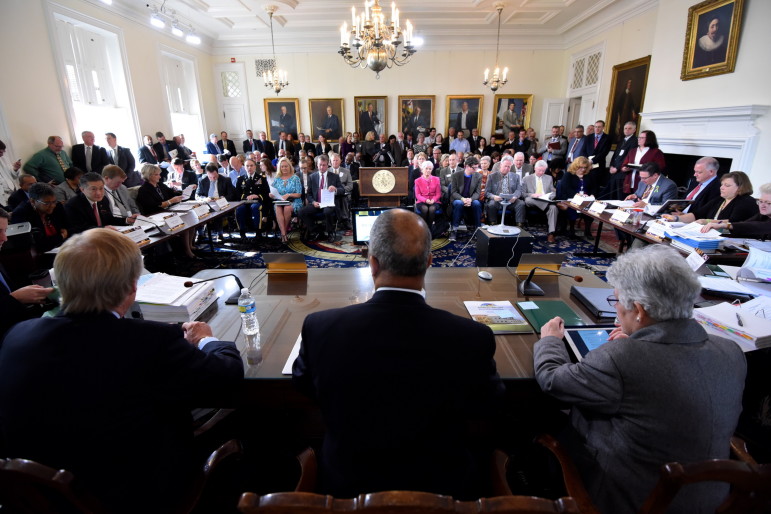 The Board of Public Works granted a controversial wetlands license to K. Hovnanian’s Four Seasons at Kent Island Wednesday in a 2-1 vote, after two previous appearances before the board and a court decision that restrained the three-member panel’s scope of authority.

Bill Morgante, the state’s wetland administrator, recommended the board approve the project and said the stormwater management system proposed in the development would be better for the environment than current agriculture on the property.

Previous board had rejected project

In 2007, the board, with then-Gov. Martin O’Malley, a Democrat, in addition to Kopp and Franchot, denied the license application.

But a 2012 court decision, Board of Public Works et al. v. K. Hovnanian’s Four Seasons at Kent Island, LLC. found the board guilty of voting based on factors “outside the lawful scope of its discretion,” according to the opinion. The court ruling clarified that the board must make its decision based solely on the interests of preserving wetlands rather than judging the project as a whole.

In 2013, the board deferred voting, following questions over a piece of the property known as the Tanner parcel. This year, the application appeared before the board for the third time.

Though Kopp voted yes Wednesday, she voiced serious hesitations over the Kent Island plans, calling it the “wrong development” in the “wrong place,” and clarified that her vote corresponded with the Court of Appeals ruling, not her approval of the project.

A number of citizens voiced their disapproval of the project, calling for additional public hearings, as the last was held in 2003.

“I do want to bring common sense into government at some point, and I think the Board of Public Works should protect us from rising seas, should protect the citizens and community,” Jeffrey Horstman, of the Midshore Riverkeepers Conservancy, said in the meeting. “I think you should protect us from developments like this, that will hurt us economically and environmentally, as it sinks into the river over time.”

In a posting on Facebook after the meeting, Franchot wrote: “According to our own staff, this project will have harmful effects on the Chesapeake Bay and its tributaries, will aggravate traffic congestion, and will disrupt the quality of life that is so important to the Eastern Shore’s economy. The Board of Public Works did some very good things today… but this is one that bothers me.