FROSH SEEKS MERGER RECONSIDERATION: Attorney General Brian E. Frosh joined an effort in court Wednesday to require the Maryland Public Service Commission to reconsider its approval of Exelon Corp.’s merger with Pepco Holdings, Carrie Wells reports in the Sun. Frosh filed a friend of the court brief in an effort by the Office of People’s Counsel, Maryland’s consumer advocate, which filed a petition in Circuit Court for Queen Anne’s County asking for judicial review after the PSC approved the $6.9 billion merger in May in a 3-2 vote.

HOGAN’S FACEBOOK FACEPLANT: The editorial board for the Sun opines that it is a shame that Gov. Larry Hogan used a Facebook post to politicize Tuesday’s legislative hearing on the closure of the Baltimore City Detention Center because it obscured what was an extremely substantive, newsworthy and well received briefing by his corrections secretary.

LONG PROCESS OF REFORM: Propositions that face uphill fights often take years to pass. It is part of the process of educating the legislators and their constituents, changing minds and influencing public opinion. Redistricting reform involves taking power from a powerful elite, and that doesn’t happen without a struggle, often a prolonged one, writes Len Lazarick for MarylandReporter.com.

TIES WITH S. KOREA: Maryland officials have taken another step to help strengthen business ties with South Korea, according to an AP report in the Daily Record. Lt. Gov. Boyd Rutherford signed a memorandum of understanding Wednesday with Gov. Nam Kyung-pil, of the Gyeonggi Province of South Korea. They are agreeing to work to maximize business opportunities and boost economic opportunities in both places. 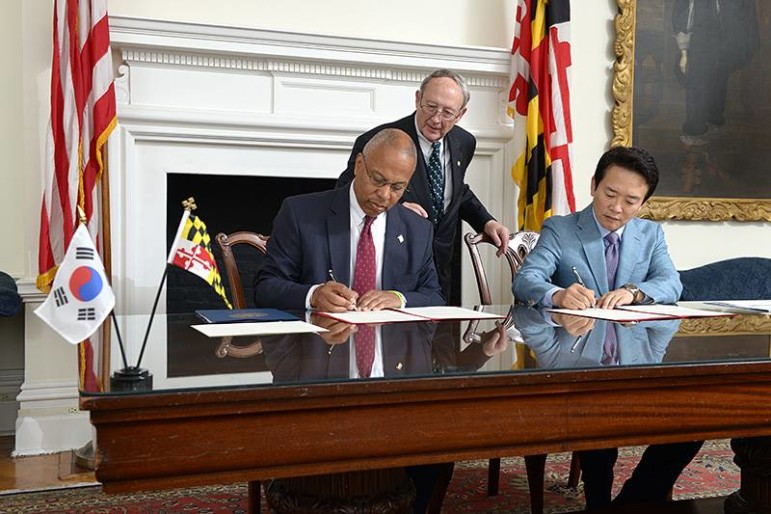 POT, HEALTH & A STRONG ECONOMY: In an op-ed for the Sun, Barry Ronan ( of Western Maryland Health System and Shawn Hershberger of the Cumberland Economic Development Corp write, “We live and work in Cumberland, a small Western Maryland town blessed with stunning natural surroundings, tranquillity and friendly neighbors. Like many communities, Cumberland invests considerable resources to reach two goals: quality health care and a strong economy. We have concluded that tightly regulated access to medical cannabis can help us deliver on both goals.”

FREDERICK BOE PREPS FOR LEGISLATIVE SESSION: On Wednesday night, the Frederick County Board of Education reiterated its stance that education decisions should remain in local control, reports Jeremy Bauer-Wolf for the Frederick News Post. With the 2016 legislative session looming, the board re-established guiding principles in preparation for advocacy on bills at its board meeting.

ON THE DEBATE: In the Sun, John Fritze writes that Ben Carson, the retired Johns Hopkins neurosurgeon turned presidential candidate, signaled early in Wednesday night’s unruly GOP debate that he wasn’t planning to engage in attacks on his competitors. As the evening went on, the understated former Maryland resident, who is currently leading the Republican field in national polls, stuck to that promise — and wound up largely disappearing in the process.

REPUBLICANS’ BAD JUDGMENT: In recent polls of Republicans, nearly half of those surveyed consistently support Donald Trump or Ben Carson, and both nationally and in a variety of early primary states, their dominance is increasing. … “As a conservative in good standing, I am amazed at the bad judgment of the Republican electorate,” writes Richard Vatz in an op-ed in the Sun.

COUNCILMAN ATTENDS COASTAL FLOODING SUMMIT: Dozens of government officials — including the Annapolis-area county councilman — gathered in New Hampshire over the weekend at a first-of-its-kind summit on coastal flooding and sea level rise. Rema Rahman of the Annapolis Capital writes that Democrat Chris Trumbauer joined a bipartisan group of officials at Rising Tides 2015. They discussed strategies to cope with increases in coastal flooding amplified by seal level rise.