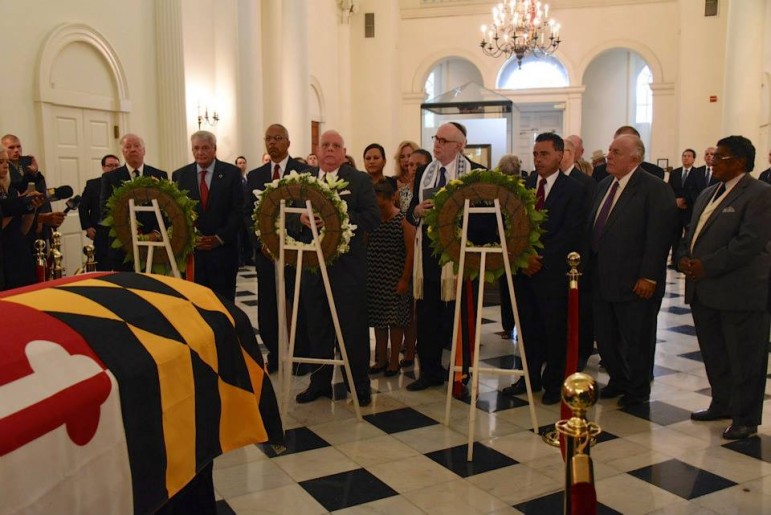 MARYLAND DOES WELL BY BAY: Maryland and Delaware may be neighbors, but they are far apart in the way they shield the fragile Chesapeake Bay ecosystem from agricultural pollution, a new federal report concludes. Jeremy Cox and Molly Murray of the Salisbury Daily Times report that the EPA said on Monday that Maryland’s efforts to reduce nutrient- and sediment-laden runoff into the bay from farms are “robust” and “well implemented.”

MARYLAND LOSING TAXPAYERS: Meg Tully of MarylandReporter.com writes that recently released data from the IRS shows that about 5,500 more taxpayers left Maryland in 2012 than moved into the state. Long-cited by tax critics as annual data that show the migration of taxpayers to lower-taxed states, some experts caution that not too much should be read into year-to-year changes.

EX-CANDIDATE SUES ON REDISTRICTING: Amanda Yeager of the Howard County Times reports that a former candidate for the Maryland House of Delegates says the state’s method of dividing land into voting districts violates his constitutional rights and harmed his campaign. Christopher Eric Bouchat ran unsuccessfully last year for a delegate seat in House District 9A. Bouchat lost in the Republican primary to Howard County candidates Warren Miller and Trent Kittleman, who went on to win the general election.

ON LEAD PAINT SETTLEMENT DEALS: Dan Rodricks speaks with Post reporter Terrence McCoy about his story on how companies have turned buying lead paint settlements from poor, black lead paint poisoned victims into a multi-billion dollar industry. Also on the show are Ruth Ann North, president and CEO of the Green and Healthy Homes Initiative,and Saul Kerpelman, a Baltimore lawyer who has represented thousands of children poisoned by lead paint.

RX POT FARMING PLANS: Some farmers and other investors are already lining up in the hopes of getting in on the ground floor of what they hope will be a growth industry in both growing and dispensing medical marijuana, writes Bryan Sears for the Daily Record. At least two farming operations in northern Baltimore County are calling on the County Council to amend a proposed law to allow the growing of medical cannabis in rural areas of the county.

FRANCHOT’S JOB: Columnist Laslo Boyd of Center Maryland writes about Comptroller Peter Franchot and his attempts to get the state to start public school after Labor Day. Boyd writes that “Franchot has never seen the job description of the Comptroller as limiting his role. He certainly deserves credit for his aggressive stance on reforming the state’s procurement process, a challenge that falls well within his responsibilities. On the other hand, he has over his time in office taken on other issues that seem fairly far removed.”

HORSESHOE GOOD FOR CITY: In an opinion piece for the Sun Anirban Basu writes that “Our company, Sage Policy Group Inc., recently conducted the first economic impact assessment of Baltimore’s newest entertainment hub (the Horseshoe Casino) by analyzing data attached to its initial year of operations. We conclude that despite a lengthy winter coupled with a challenging spring and summer in Charm City, the Horseshoe has emerged as one of Baltimore’s largest economic engines.”

HOYER TOURS VETERANS CENTER: Rep. Steny Hoyer toured a veterans center in Baltimore on Wednesday as city and federal leaders have renewed their focus on confronting veterans homelessness, John Fritze reports for the Sun. Hoyer, the second-highest ranking Democrat in the House, visited with officials at the Maryland Center for Veterans Education and Training, a Jonestown facility that recently won a piece of a $48 million grant from the U.S. Department of Housing and Urban Development to address homelessness.

CARDIN STILL WRESTLING OVER DEAL: Even as his colleague from Maryland on Wednesday provided the final vote needed for President Obama’s Iran deal to survive, Sen. Ben Cardin continues to wrestle with whether to support the deal — a decision that has pitted him against his rabbi, riled his constituents and consumed him for much of the past month, Rachel Weiner reports in the Post.

DELANEY TALKS IRAN DEAL: Blogger Ryan Miner talks with U.S. Rep. John Delaney about the proposed U.S.-Iran nuclear deal and what kind of deal he believes it is for both the U.S. and Iran. The discussion last for about 20 minutes.

O’MALLEY ON THE AIR: Martin O’Malley was given about 20 minutes of a 50-minute national radio show yesterday when he was interviewed by Tom Ashbrook for the show On Point. You can hear O’Malley here.

Correction: In yesterday’s Roundup, we misspelled the first name of WYPR-FM’s Sheilah Kast. Thanks to Andrew Schotz for calling this to our attention.