Applying for benefits By USDAgov with Flickr Creative Commons License

A new report by libertarian think-tank Cato Institute asserts that Maryland’s welfare benefits are higher than almost every European country, with the exception of Denmark and the United Kingdom.

“It’s clear that welfare benefits in Maryland are sufficiently high that they can act as a disincentive to work,” said Michael Tanner, a senior fellow at the Cato Institute and lead author of the study. “Maryland should be re-examining its welfare policies to put more emphasis on work.”

The study used calculations from a 2013 Cato Institute report that assumed a single parent with two children received most major sources of aid, including Temporary Assistance for Needy Families (TANF), SNAP (food stamps) and housing. It found such a family could qualify for about $27,788 in benefits per year – the seventh highest state in the U.S.

Medicaid funding was excluded for comparison because many European countries give healthcare as a standard service, and it is not tied to low-income qualification.

The Cato numbers on Maryland welfare totals are comparable to numbers obtained from reports on public benefits put together by Maryland’s non-partisan Department of Legislative Services. According to numbers from the 2012 report, DLS estimated welfare aid for a single adult and two children ages 3 and 7 (excluding Medicaid) at about $27,822, said DLS policy analyst Tonya Zimmerman.

“What we cannot attest to is the validity of the comparison to benefits in other countries or the relative purchasing power of those benefits in the CATO work,” said DLS policy analysis director Warren Deschenaux.

Overall, the Cato report found U.S. benefits on average fell between Sweden and France. Denmark had the highest benefits package for a single parent with two children, at 31,709 euros, about 72% of the average wage. The U.K. was 23,625 pounds, or 65% of the net income of an average wage earner and 161% of gross income at minimum age, the report states.

Tanner said that the most surprising thing they found was that European countries are not especially more generous when it came to the poor. Instead, he said much of the welfare state helps the elderly or the middle class.

“It’s not a case of where the U.S. scrimps on the poor,” Tanner said.

Connecticut, New Jersey, California, Massachusetts and the District of Columbia each had benefits that topped every European country in the study except Denmark, the Cato study found. (More story below graph.) 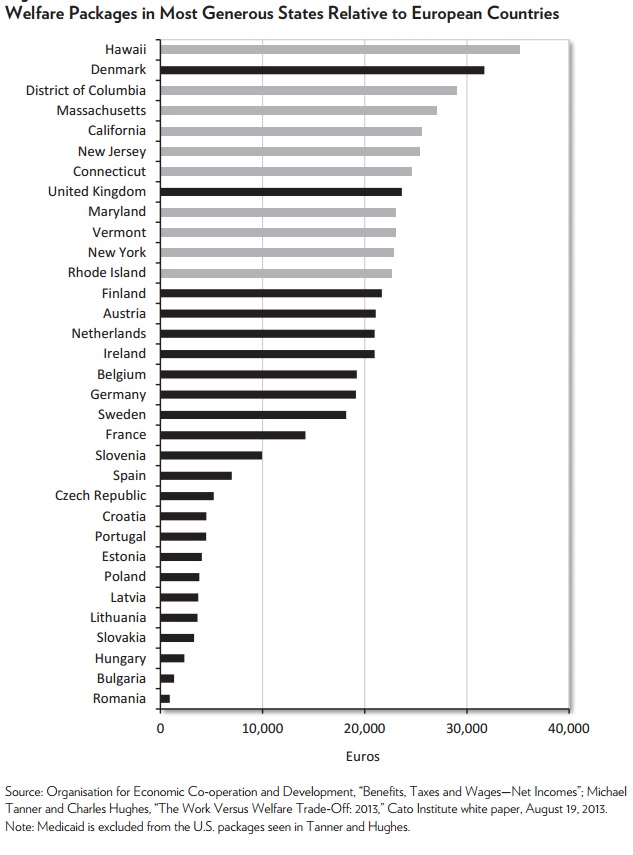 Critics of the 2013 Cato paper that estimated state welfare benefit amounts said that it should not have assumed a family would simultaneously receive all different types of benefits.

The Economic Policy Institute, a think tank representing the interests of low- and middle-income workers, called it “wildly misleading” in a 2013 blog post.

“It is this simultaneous assistance from multiple sources that lets the entire “welfare benefits package” identified by Cato add up to serious money,” the post stated. “But it’s absurd to assume that someone would receive every one of these benefits, simultaneously.”

DLS has several caveats in their report calculating benefits. For instance, food stamps and Temporary Cash Assistance (TCA) calculations by legislative services are the the maximum amount allowed for a family of three, which may not reflect the experiences of individual families.

In Maryland, not all benefits are readily available, such as housing subsidies and energy assistance, according to DLS.

Still, Tanner argues that most families who qualify for TANF (Temporary Assistance for Needy Families) also qualify for food stamps and Medicaid, and more than half will receive WIC (Women, Infant and Children) as well.

In Maryland, about 26.5% of households receiving TANF also received housing assistance, his report stated. Housing aid accounted for about $13,000 of the nearly $28,000 in total Maryland welfare benefits calculation.

“We thought that was a significantly large enough amount that you could include it,” he said.

Here is a comparison chart with DLS numbers vs Cato numbers. Please note the Cato numbers appear to add up to 35,671 but due to rounding, it is actually 35,672

Analysis: Could Ehrlich fix the state and supply a positive vision?