MANDEL TO LIE IN REPOSE: The Sun is reporting that former Gov. Marvin Mandel will lie in repose at the Maryland State House on Wednesday, a day before his funeral. The funeral is scheduled for 11 a.m. Thursday at Sol Levinson & Bros. funeral home in Pikesville. Interment will follow at 1:30 p.m. at Lakemont Memorial Gardens in Davidsonville.

ON MANDEL, HIS LEGACY: The Sun compiles quotes from Maryland politicos about Mandel’s life and impact on the state.

HOGAN BLASTS O’MALLEY ON FURNITURE BUY: Doug Donovan of the Sun reports that Gov. Larry Hogan criticized former Gov. Martin O’Malley on Monday for buying most of the furniture from the governor’s mansion at a discount after it had been declared “junk” by the Democrat’s outgoing administration. Hogan, a Republican, disputed that the furniture was “junk” and would have been thrown out or declared surplus had O’Malley not purchased the items.  The article is topped by a WJZ-TV report on the subject by Megan McCorkell 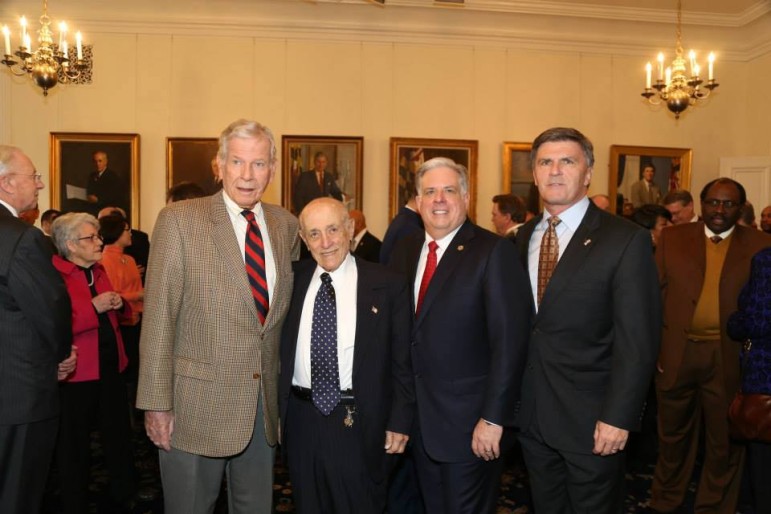 On Larry Hogan inauguration Day Jan. 22, he posed with former governors. From left, Harry Hughes, Marvin Mandel, Hogan and Bob Ehrlich. Their portraits can be seen on the wall behind them in the Governor’s Reception Room. Photo by Governor’s Office.

PAPERLESS COURT FILINGS EYED: Some Maryland courts are testing an electronic filing system, but going paperless is having some pitfalls. Barry Sims of WBAL-TV reports that the Maryland court system is trying to streamline the courts by reducing the use of paper, introducing an electronic filing and case information system. The change is out of necessity, according to the Maryland courts, as they try to move away from outdated systems. And as they do, they’re finding problems that must be resolved to make the new system efficient.

HOGAN GETS 3 NAMES FOR HIGH COURT SEAT: Gov. Larry Hogan will mull over an appellate judge, a trial judge and a private attorney as he considers who to name to the Maryland high-court seat left vacant when Judge Glenn T. Harrell Jr. reached the state’s mandatory judicial retirement age of 70 earlier this summer, reports Steve Lash in the Daily Record.

MSEA SEEKS CUT IN TESTING: The teachers union in Maryland has launched a statewide advertising campaign to reduce the number of standardized tests teachers administer to students. Ovetta Wiggins of the Post reports that the Maryland Educators Association started “Less Testing, More Learning,” a half-million dollar, month-long campaign on Monday with two weeks of television commercials on Baltimore and Washington D.C. stations.

ENVIROS EYE LOCAL ENFORCEMENT: “Under construction” may be a sign of progress to many, but bare soil at a building site poses a serious threat to the Chesapeake Bay and its tributaries if allowed to wash away in a rainstorm. State rules require land cleared for development to be “stabilized” to prevent such erosion, but environmental groups contend local enforcement of sediment and erosion control laws is weak, and the state needs to become more involved, Timothy Wheeler reports in the Sun. Even state reviews conducted in the past year found minor to serious problems with enforcement by municipalities.

REMEMBERING GIL GUDE’S POTOMAC TRIP: Post columnist John Kelly remembers U.S. Rep. Gilbert Gude, of Maryland’s eighth congressional district. In August 1975, Gude, a moderate Republican, went on a walk. And a paddle. And a ride — on horses, bicycles and boats. Using various means of transportation, he led a procession of about two dozen people on a four-week journey along the entire river. While no specific legislation came from the trek, it became clear that the entire region had to work together to ensure the Potomac’s health. 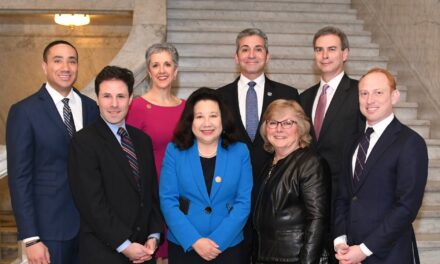