President Obama’s Sept. 6 decision to postpone suspending deportations of undocumented migrants from the United States roiled his base and added fuel to the already super-heated debate over the boundaries of presidential authority.

The latter result is ironic because immigration is one of the areas where Congress has indeed endowed the President with broad executive discretion. In fact, based upon many years of experience in the migration and nationality fields, I believe that current federal law clearly authorizes the President to parole into our territory each and every one of the undocumented migrants appearing on our border with Mexico today.

The more compelling question is whether President Obama – or any president – exercises such authority wisely. The jury is almost always out permanently on such intangibles, but there are other aspects of the immigration debate in our country which are more concrete.

First, to Americans who continue in 2014 to harbor visions of mass deportations of undocumented aliens, I would say that it is time to come to grips with reality. Mass deportations are not going to happen.

America has seen four government-sanctioned forcible relocations in its history: the African slave trade, the Choctaw and Cherokee removals of the 19th century, and Japanese-American removals in the wake of Pearl Harbor. All were enforced with the bayonet and the lash, and all left wounds that are felt to this day.

Think about it: in 2014, the National Guard and police mobilizations that would be required to even approach the force necessary for a policy of mass deportations would dwarf manpower requirements for both Afghanistan and Iraq. A mass deportation scheme would unleash insurrection in our nation on a scale not seen since the 1860s. It would result in a government larger and more intrusive than ever.

What about measures, short of bayonets, to drive undocumented workers from our country? To be truly effective, such measures would require an unprecedented level of official intrusion into virtually every facet of daily American life, increasing tensions between individuals and their government.

Border security? That’s a high priority but I do not want to live in a continental jail, surrounded by wire and high technology barriers.

Today in Mexico, we see examples of what is needed to shut off flows of undocumented people: giving them an economic stake in their own country. Economic improvements have reduced migration from Mexico. Improved economic conditions in neighboring countries have a measurable impact at the border.

This is not a plea for increased foreign aid. We can have an enormous impact on economic growth in the Americas by other means, such as reducing U.S. barriers to domestic and international growth, by supporting pro-growth democratic leaders at home and abroad, and by putting our own economic house in order. But first we must decide to have that impact. In 2014, for the United States government, Latin America and the Caribbean are low priorities.

No unifying vision on immigration

The single most important lesson I learned over 30 years of involvement with U.S. immigration, nationality, and visa policy is this: the system has no unifying vision. It is instead a crazy-quilt of special provisions for special categories of people, based loosely upon shards of the “family reunification” pillar erected during Lyndon Johnson’s presidency. Not even 9/11 could change this. But it must be changed, whatever it takes.

At the beginning of the 20th century, American immigration policy had a unifying vision: strict per-country numerical quotas, and bars to admission for a relatively short but unforgiving list of disqualifying conditions. That vision, seen a century later, appears harsh. It was informed by white supremacy and unabashed American nationalism. But at least there was a vision. Today we have none at all, and it shows.

What should America’s vision be for 21st century immigration policy? My vote: the central objective of our immigration policy, day and night, must be to promote American economic development. We must make U.S. economic development a priority as high as stopping Iran’s nuclear program. We must swiftly admit the most talented and capable people we can find, and make it possible for them to remain here for the long term, permanently, with their families.

Some will be physicists and engineers. Some will be farm workers. We must find a way to admit them and allow them to remain lawfully. We must purge the United States Code of barriers to attracting the most talented people to our shores and keeping them here. We must consider how immigration policy meshes with vitally-needed efforts to make our nation far more competitive than it is in 2014. All, tasks for a new president with vision. Tasks for a leader.

Finding a way to integrate immigrants

But far more important in my view is whether that man, woman, or child will love the United States as much as I do. Creating an atmosphere to encourage such affection is not a spectator sport. It is something we can influence. But we must get into the game, if we are to succeed in fostering genuine attachment to this nation and its values among a so-far unassimilated class of Americans-in-hiding. Language ability will follow.

I believe we must find ways to integrate, reach out, share experiences, befriend, and communicate. Failure at this will increase an already massive, alienated sub-population. We must not sit quietly and permit such a threat to national unity; a threat that is far greater, in my judgment, than formally declaring an end to pursuit of undocumented people.

2013 was the 1700th anniversary year of the Edict of Milan, wherein Emperor Constantine I formally recognized Christianity and other faiths in the Roman Empire and ended state-sponsored persecutions. An historic watershed in human history, this event proved a net good that benefited humanity more than most of the other social revolutions that followed across the centuries until 1776.

America needs a leader with Constantine’s vision. We need an edict of toleration, so to speak, for the undocumented among us. They are here, and they are not going home. We must make a virtue of necessity by finding a way to harness their untapped energy, bring them into the national fold, and relieve pressure within American society that will lead in dangerous directions if ignored.

Richard Douglas served in the U.S. Foreign Service in Ciudad Juarez, Mexico. A Maryland businessman, he is also an Iraq veteran, former Pentagon official and former staff of the U.S. Senate. He ran for the 2012 Republican nomination in Maryland for the U.S. Senate. He can be reached at RichDouglas@hotmail.com. 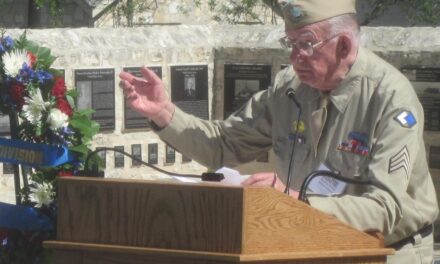