Md. legislators get high marks from consumer group — but not GOP

A consumer advocacy group is giving state lawmakers high scores for passing laws in the 2014 General Assembly session that raise the minimum wage and reduce the impact of foreclosures.

The Maryland Consumer Rights Coalition, a nonprofit whose mission includes advancing fairness and justice for consumers, also released four-year scores that depicted state lawmakers as generally favorable to consumer issues. Only nine of 47 senators and 46 of 141 delegates got four-year scores lower than 80%.

In 2014, the coalition scored 33 senators and 50 delegates with scores of 90% or better, compared to only two senators and 35 delegates who scored under 65%. The scores were based on seven bills, six of which passed.

Senate President Mike Miller and House President Mike Busch both scored well, with 2014 scores of 100% and four-year scores of 97%. Republicans House Minority Leader Del. Nic Kipke and Senate Minority Leader David Brinkley scored lower, with scores of 62% and 75% 2014 and 83% and 69% for four-year scores, respectively. All of the failing grades were Republicans, except for five Democratic delegates, including House Judiciary Chairman Joe Vallario.

“As so many Marylanders struggle to recover from economic hard times, those lawmakers really stood up for Maryland’s working families, and we’re proud to celebrate their work,” stated coalition Executive Director Marceline White in a press release.

This is the fifth year the coalition has completed rankings, and this year it highlighted a bill championed by Democratic Gov. Martin O’Malley that raised the minimum wage to $10.10 by 2018 and two bills that will help families who have gone through a foreclosure. Those foreclosure bills cut the amount of time banks can collect mortgage-related debts and that mortgage-related forgiven debts will be exempt from the income tax.

Maryland Business for Responsive Government also included the minimum wage bill as part of its ratings unveiled in May, but the nonprofit advocating for economic development and job creation was on the opposite side of the issue – penalizing lawmakers who had voted for it. Other than that bill, though, the consumer group and business group chose different bills on which to rate lawmakers. The business group ratings were consistently lower, with only one lawmaker scoring 100% and several scoring 0%.

The Maryland Consumer Rights Coalition ratings also included measures to study reducing car insurance costs, ban “ticket bots” that buy up tickets to events before people can, establishing a Consumer Protection Division of the Maryland Attorney General’s Office in Prince George’s County, and a proposed ban on retailers using tracking technology on customer’s phones to track shopping behavior unless notice is posted. That ban was the only legislation scored that did not pass.

Seven “Consumer Heroes” were recognized in the ratings for earning perfect marks between 2011 and 2014. Those included: Sens. Richard Madaleno, Paul Pinsky, and Jim Rosapepe along with Dels. Al Carr, Bill Frick, Barbara Frush, and Carolyn Howard.

Madaleno, D-Montgomery, and Pinsky, D-Prince George’s, both fought on the Senate floor for the minimum wage bill to be expanded, Madaleno by increasing the wage earlier and Pinsky by suggesting an increase for the wage for tipped workers. Neither was successful.

Though the coalition scorecard was overwhelmingly glowing in its review of the legislature, White said there was more work to be done to increase protections from unfair debt collection and ensure paid sick leave for all workers. 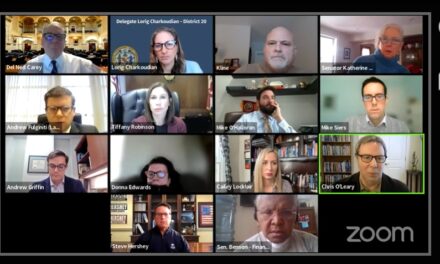 Debate unlikely to tell us what we really ought to know