PUBLIC FINANCING FUND DRYING UP: Maryland Republican gubernatorial nominee Larry Hogan became the first general election candidate in 20 years to opt to participate in the state’s public financing system. He could very well be the last for quite some time, reports John Wagner for the Post. That’s because the Fair Campaign Financing Fund — from which Hogan is getting a grant of about $2.6 million — is about to run out of money. And as of now, state leaders have no plans to replenish it.

NEW POWER PLANTS: Developers haven’t built a new power plant of any significance in Maryland for over a decade — one reason the state imports more electricity than almost any other in the country, racking up extra charges for consumers, reports Jamie Smith Hopkins for the Sun. But change is coming. Two large projects, permits in hand, could begin construction this year. Two more seek approval. Land-clearing work is under way on a fifth, a small facility intended to run when demand is high.

CHILD’S DEATH PROMPTS CALLS FOR GROUP HOME PROBE: Doug Donovan reports in the Sun that a 10-year-old disabled foster child died last week while under the care of a group home in Anne Arundel County that Maryland health regulators were in the process of closing down, state Health Secretary Dr. Joshua Sharfstein confirmed Thursday.

SEVERING SCHOOL TIES: The University of Maryland University College, which has been struggling with declining enrollment, is considering severing some ties with the state university system to avoid burdensome regulations and work more closely with the private sector, Nayana Davis reports in the Sun.

IMMIGRANT SHELTER: A vacant military property near Westminster will not be used as a shelter for immigrant children, the U.S. Department of Health and Human Services told local officials Saturday. John Fritze and Jacob Denobel of the Sun report that the Obama administration had been considering the 3.8-acre Army Reserve Center as a potential shelter, touching off protests from the Carroll County Board of Commissioners, which met in an emergency session Friday evening.

ON ANDY HARRIS: Jenna Johnson of the Post profiles U.S. Rep. Andy Harris and attempts to answer the question: Why would a Maryland congressman get himself embroiled in the marijuana decriminalization controversy that affects only the jurisdiction of Washington, D.C.?

STATE HOUSE ROOM TO REOPEN: Since September 2012, a temporary white wall has separated tourists from the room where George Washington resigned his commission as commander of the Continental Army, establishing the principle of civilian control of America’s government. Alex Jackson of the Annapolis Capital writes that it may have been the most significant thing to occur in the State House in the building’s long history. And the room where it happened is on track to re-open in December, said Elaine Bachmann, director of outreach, exhibits and artistic property at the Maryland State Archives.

EXCUSES: When it comes to getting out of late fines, Jared DeMarinis has nearly heard them all. DeMarinis, the director of candidacy and campaign finance for the Maryland State Board of Elections, is the person candidates call when they are notified the state is assessing them for failing to file timely campaign finance reports, reports Bryan Sears for the Daily Record.

DEL. FRANK’S DEPARTURE: Twelve years of standing up for small business, advocating for his 42nd District’s constituents and arguing a Republican viewpoint in a mostly Democratic legislature have come to an end.The primary election on June 24 is now in the rear-view mirror. But this election, Del. Bill Frank’s name wasn’t on a single billboard. Twelve years in Annapolis were enough, he said. Mary Tilghman reports the story for the Sun.

MOONEY’S MOVE: The editorial board for the Frederick News Post opines that Alex Mooney moved out of Maryland because doors were closing to him. Now that he’s living in West Virginia, doors may be opening again.  The ambitious conservative Republican, who first made his mark representing Frederick County in the General Assembly, was squeezed out of a bid for Congress by Democratic redistricting and his mentor Roscoe Bartlett’s decision to run for a sixth term.

MOSBY’S VOTERS: One popular theory of lawyer Marilyn Mosby’s upset win over incumbent State’s Attorney Gregg Bernstein was that race played a deciding role in the election, helping a political newcomer oust a white prosecutor in a majority-black city. But Baltimore residents voted less along racial lines than they did four years ago when Bernstein knocked off veteran top city prosecutor Patricia Jessamy with overwhelming support in white neighborhoods, a Baltimore Sun analysis shows. Luke Broadwater and Ian Duncan report the story for the Sun.

PEROUTKA’S FOSSIL: A candidate for Anne Arundel County Council recently donated dinosaur fossils to a creationist museum for an exhibit that claims the creatures roamed the Earth less than 5,000 years ago, writes Rema Rahman and Elisha Sauers report for the Annapolis Capital. Michael Peroutka, the Republican nominee in the District 5 council race, presented the fossils at the Creation Museum in Petersburg, Ky., near Cincinnati, over the Memorial Day weekend. Here’s a 30-minute video of the occasion.

COVE POINT STUDY: A proposed liquefied natural gas facility in Calvert County could put nearby residents at “significant risk” if a fire or explosion occurs, according to a British consulting firm hired by opponents of the project to review its hazards, Tim Wheeler reports in the Sun. 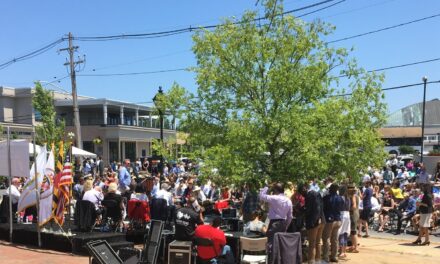