By Jeremy Bauer-Wolf and Len Lazarick

House and Senate members meet on budget conference in 2011. Most of the same players in the same seats were at Tuesday’s conference committee.

House and Senate conferees working on the state budget tentatively approved an alternative to the contentious stormwater remediation fee dubbed the “rain tax” by opponents.

The surprise move offered by Sen. James Ed DeGrange of Anne Arundel County appears to be an end-run around environmentalists and the House Environmental Matters Committee, which has blocked any changes to the requirement that nine counties and Baltimore City impose a separate tax to clean up stormwater polluting the bay.

Following a contentious back-and-forth between the Carroll County government and state officials, the Maryland Department of the Environment allowed Carroll County to allot a portion of its property taxes to fund the county’s stormwater management program.

DeGrange’s amendment to the catch-all Budget Reconciliation and Financing Act permits the other nine jurisdictions to seek the approval of the Department of the Environment to designate a portion of their general property tax for stormwater remediation.

The tax to clean up rainwater has proved controversial, and varies widely across jurisdictions. It has become a politically volatile election issue in Anne Arundel County.

Bills to repeal or modify have failed

Several bills to repeal or modify the rain tax have failed this session in both the House and Senate committees that handle environmental legislation.

There was little discussion of the DeGrange amendment, which came toward the end of an hour-long meeting between members of the House Appropriations and Senate Budget committee to resolve their differences on spending.

The tax, disparaged by its opponents as an extraneous expense for business and homeowners alike, is designed to improve the health of the Chesapeake Bay. Local officials determine how high a fee to levy against property owners.

The “rain tax” was passed toward the end of the 2012 General Assembly session. During last year’s session, Sen. Ed Kasemeyer, D-Howard, attempted to push back the fee’s implementation by two years, but that failed in the House committee on the last day of the session.

As chairman of the Budget and Taxation Committee, Kasemeyer leads the Senate negotiators on the budget conference committee.

Unlike a regular piece of legislation, the budget and the accompanying BRFA come to the floor in a conference committee report that cannot be changed, but only voted up or down without amendment by either chamber. 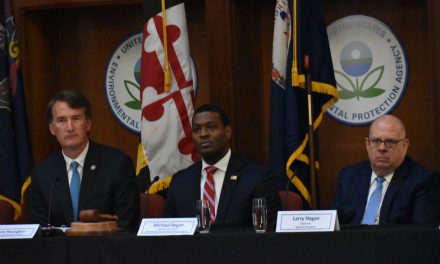