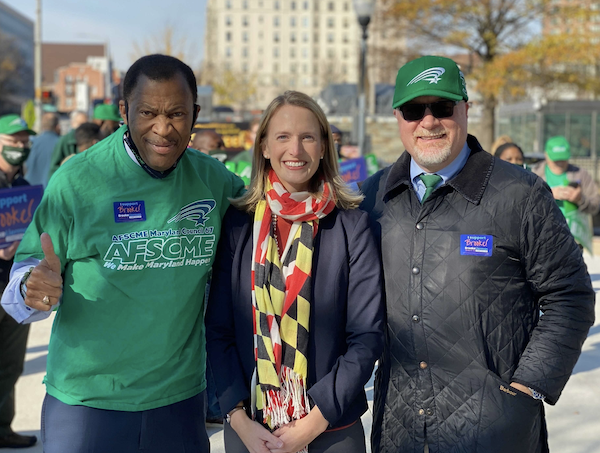 HOGAN: NEW VARIANT A CONCERN, BUT DON’T PANIC: Gov. Larry Hogan assured Marylanders Wednesday that while the new COVID-19 omicron variant is cause for concern, there is no reason to panic. The South African strain of the virus is rapidly spreading across the globe and on Wednesday morning the first U.S. case was identified in a California resident who had recently traveled to South Africa. Bryan Renbaum/Maryland Reporter.

MSDE SEEKS NEW MASKING POLICY WITH ‘OFF RAMPS’ FOR DISTRICTS: Maryland’s State Board of Education is directing state officials to draft a new emergency mandate for masking in public schools that will include “off ramps” for systems to lift such requirements in the future. Lillian Reed & Liz Bowie/The Baltimore Sun.

COVID CASES IN CARROLL SCHOOL UP FOR 6th TIME: The number of people with COVID-19 in Carroll County Public Schools this week increased for a sixth time while quarantine numbers dropped by nearly half. Kristen Griffith/The Carroll County Times.

JUSTICE: FREDERICK SCHOOLS IMPROPERLY RESTRAINED DISABLED STUDENTS: A Department of Justice investigation and subsequent settlement announced Wednesday found that Frederick County Public Schools “systematically and improperly” secluded and restrained students with disabilities in violation of federal law. The investigation, opened in October 2020, “revealed thousands of incidents of seclusion and restraint in just two and a half school years,” according to a DOJ news release. Jillian Atelsek/The Frederick News-Post.

200 NONPROFITS ASK STATE TO PUT MORE MONEY TOWARD COMMUNITIES: Over 200 nonprofit organizations and leaders in Maryland are calling on the state government to put a portion of its multibillion-dollar budget surplus toward communities affected by the COVID-19 pandemic. Johanna Alonso/The Daily Record.

DIVERSE CANDIDATES APPLY FOR JUDGESHIPS: Gov. Larry Hogan’s call for greater diversity among applicants for two coming Maryland high court vacancies has been answered for the second time. Columbia attorney Keith S. Blair, who is Black, and Maryland District Court Judge Dino E. Flores Jr., who is Hispanic, added their names to what had been a list of four white candidates for the Court of Appeals. Two weeks ago, five candidates of African, Cuban or Egyptian descent applied for the Court of Appeals that had seen seven white candidates. Steve Lash/The Daily Record.

LIERMAN PICKS UP LABOR SUPPORT IN RUN FOR COMPTROLLER: In her bid for Maryland comptroller, Del. Brooke E. Lierman won the support Wednesday of two major labor groups that represent state and local government workers. Councils 3 and 67 of the American Federation of State, County and Municipal Employees, which represent more than 50,000 government workers in the state, announced at a joint news conference Wednesday that they were endorsing Lierman (D-Baltimore City). Karina Elwood/The Washington Post.

OPINION: STATE REDISTRICTING IN BA CO HAS NO ‘FAIR’ THERE: Baltimore County Councilmember David Marks, in a column for the Duckpin, opines on the state redistricting process for congressional seats, writing that the “process produced tortuous boundaries designed to eliminate every Republican from Maryland’s Congressional delegation.  In Baltimore County, the lines are grotesque, splitting many communities—yet there is a not a whiff of complaint from activists pushing for ‘fair’ County Council maps.”

ANOTHER COUNTY HEALTH OFFICER TARGETED: With the rumor mill filled with speculation that his job as Calvert County health officer might be on the line, several speakers offered support for Dr. Laurence Polsky. Polsky’s leadership came under scrutiny earlier this year when Del. Mark N. Fisher (R) suggested the county consider finding a new health officer. The delegate was a vocal critic of health department and local board of education policies regarding the status of schools during the COVID-19 pandemic. Marty Madden/Southern Maryland News.

WA CO LEADS TRI-STATE IN VAXX, BUT STILL TRAILS MARYLAND RATE: More than 51% of people living in Washington County are fully vaccinated against the coronavirus as of Nov. 30, according to data from Maryland Department of Health, making it the top county for vaccinations in the Tri-State. But that’s still far below the percentage for the the state of Maryland. Statewide, nearly 80% of the population have received at least one dose of the vaccine. Staff/The Hagerstown Herald-Mail.

FREDERICK SENIOR CITIZENS RALLY FOR ABORTION RIGHTS: About 20 senior residents gathered in front of the Frederick County Courthouse on Wednesday to rally for abortion rights. Fifty miles away at the U.S. Supreme Court, justices were hearing oral arguments in a case that could overturn or modify the landmark 1973 decision in Roe v. Wade. Jillian Atelsek/The Frederick News-Post.

ARUNDEL SCHOOL CALENDAR MAY INCLUDE EID AL-FITR: The Anne Arundel County Board of Education will vote on a final 2022-23 school year calendar at its first meeting of the new year and, unlike the options initially proposed, possible plans will include a day off on April 21, 2023, the start of the Muslim holiday Eid al-Fitr. Rachael Pacella/The Capital Gazette.

SYMPOSIUM TO ADDRESS HOPKINS, SLAVERY & RACISM: A roster of historians is set to wade into the debate around Johns Hopkins, slavery and, in a larger sense, how enslavement and racism have shaped institutions in Baltimore and beyond. Nearly a dozen scholars, a number of students and members of the public are to gather Friday for “Conversations on Slavery, Racism and the University,” a virtual symposium. Jonathan Pitts/Tronc.