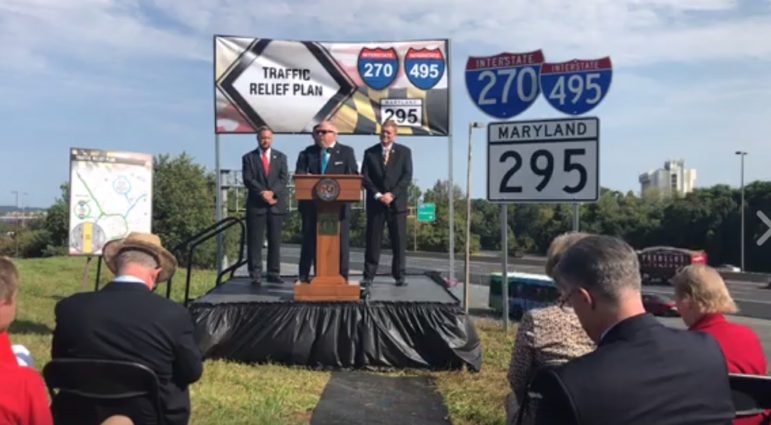 Gov. Larry Hogan announces huge projects to expand I-270, the Capital Beltway and the Baltimore-Washington Parkway with toll lanes. From a Governor’s Office Facebook video.

MAJOR HIGHWAY PROJECTS: Robert McCartney, Faiz Siddiqui and Ovetta Wiggins of the Post are reporting that Gov. Larry Hogan (R) on Thursday proposed a $9 billion plan to widen three of the state’s most congested highways — the Capital Beltway, Interstate 270 and the Baltimore-Washington Parkway — in what he said would include the largest public-private partnership for highways in North America.

OPPOSITION TO PROJECTS: Smart growth and transit advocates, environmental groups and some Democrats expressed their disapproval, calling the projects short-sighted, bad for the environment and sure to spur sprawl and overdevelopment. Business groups were elated, writes Josh Kurtz in Maryland Matters.

REDMER VS. McDONOUGH: The race for Baltimore County executive heats up on the Republican side Saturday as Maryland Insurance Commission and former delegate Al Redmer announces his campaign at a sold-out event hosted by Gov. Larry Hogan. Del. Pat McDonough, who’s been running for some time, formally announces that morning at a Dundalk diner. McDonough has been sniping at Redmer for months and Thursday released a Redmer Report, a one-page summary of all his attack points against Redmer. MarylandReporter.com.

CHALLENGE TO STATE GUN LAW: A Maryland man has mounted a U.S. Supreme Court challenge to the state’s prohibition on convicted felons possessing firearms, saying individuals must be allowed to have a judge decide on a case-by-case basis whether the ban violates that person’s constitutional right to keep and bear arms., Steve Lash of the Daily Record reports.

REGIONAL ECONOMIC WEAKNESSES: A new “super regional” group of chief executives of large employers from Richmond to Baltimore has been studying the Washington area’s economy and has identified weaknesses it says are stifling growth. The region possesses valuable assets, including a highly educated workforce and the seat of the federal government, but its incomes and productivity aren’t keeping pace with other major metropolitan areas, reports Robert McCartney in the Post. The Greater Washington Partnership also said in a report released Thursday that too many talented workers are leaving the area because of greater opportunity elsewhere.

RETURN OF PHOENIX SCHOOLS? A fire led to the eventual end of Phoenix — a groundbreaking Maryland public school program for children with addiction that closed in 2012 — but the state could see institutions like it rise again from the ashes. Recent spikes in the Maryland heroin and opioid epidemic have triggered calls for substantial changes in education systems statewide, and a state work group is weighing the return of recovery schools after a Sept. 7 meeting, Capital News Service’s Georgia Slater reports.

TOWN TO PAY PURPLE LINE GROUP: The Town of Chevy Chase will not appeal a judge’s order to pay $92,000 to the Purple Line advocacy group Action Committee for Transit and member Ben Ross for the cost of their attorneys’ fees in a public information case, Andrew Metcalf of Bethesda Beat reports. Mayor Mary Flynn said Tuesday the town will pay the fees rather than appeal the order. The Town Council plans to approve a supplemental appropriation in October to do so.

Anjali Reed Phukan in the hospital. From her Facebook page.

CANDIDATE PHUKAN RECOVERING: Anjali Reed Phukan, Republican candidate for comptroller, is recovering from emergency surgery at Atlantic General Hospital in Berlin, to remove her gallbladder. “Maybe almost died,” Phukan (FU-kan) reported on her Facebook page early Tuesday morning. Later that day she posted “I survived.” “Next time let’s just have a little less narcotics and a little more vegetables,” said the gaming agency auditor who is a recovering addict and a vegetarian. Here’s our original article on Anjali Phukan.

BALTIMORE’s SEWAGE LEAK PLAN SCRUTINIZED: It appears that a federal judge will have to settle a serious disagreement over whether the city of Baltimore has a credible new plan for curtailing the frequent sewage overflows and chronic leaks that have long made the harbor and urban waters unsafe for recreation, Timothy Wheeler of the Bay Journal reports in MarylandReporter. A local environmental group, Blue Water Baltimore, has asked a federal judge to reject the plan, unless it is further strengthened.

A SOLDIER’s TALE: Blaine Taylor, in a commentary in MarylandReporter, questions MPT’s Vietnam Voices and whether it really represents those of Marylanders who served.