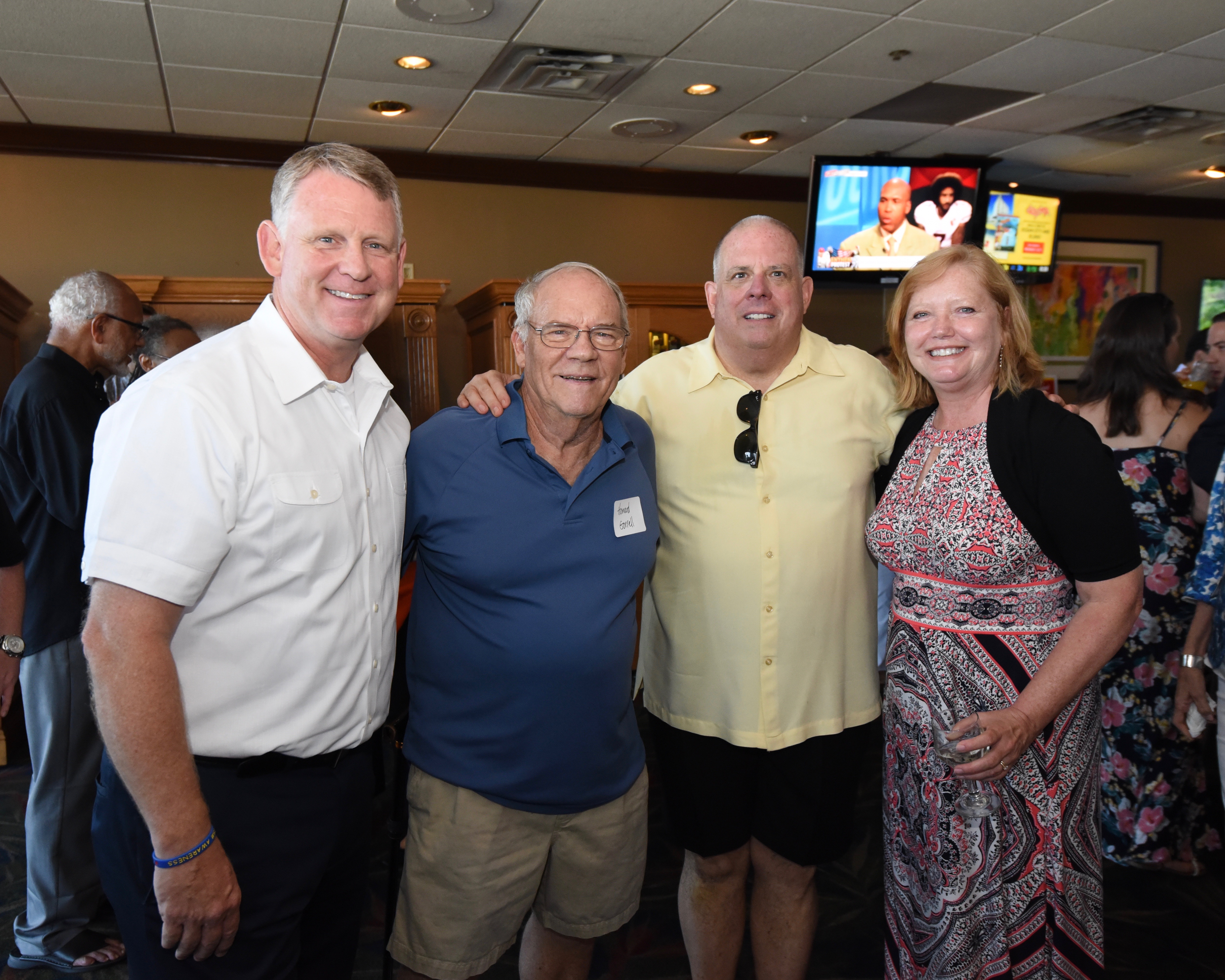 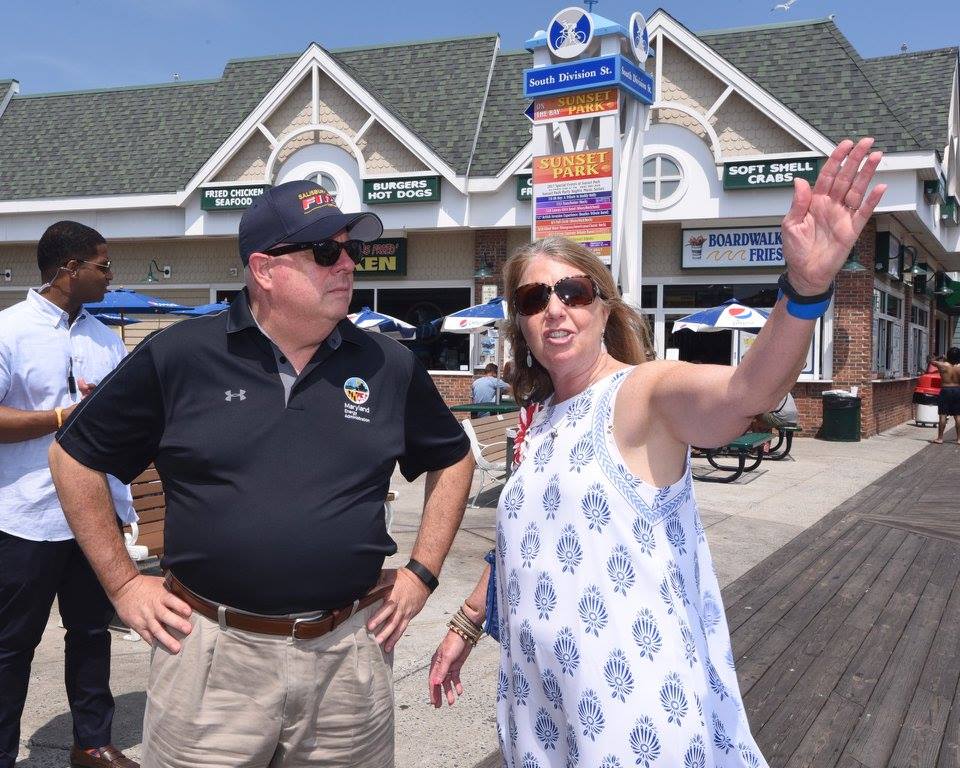 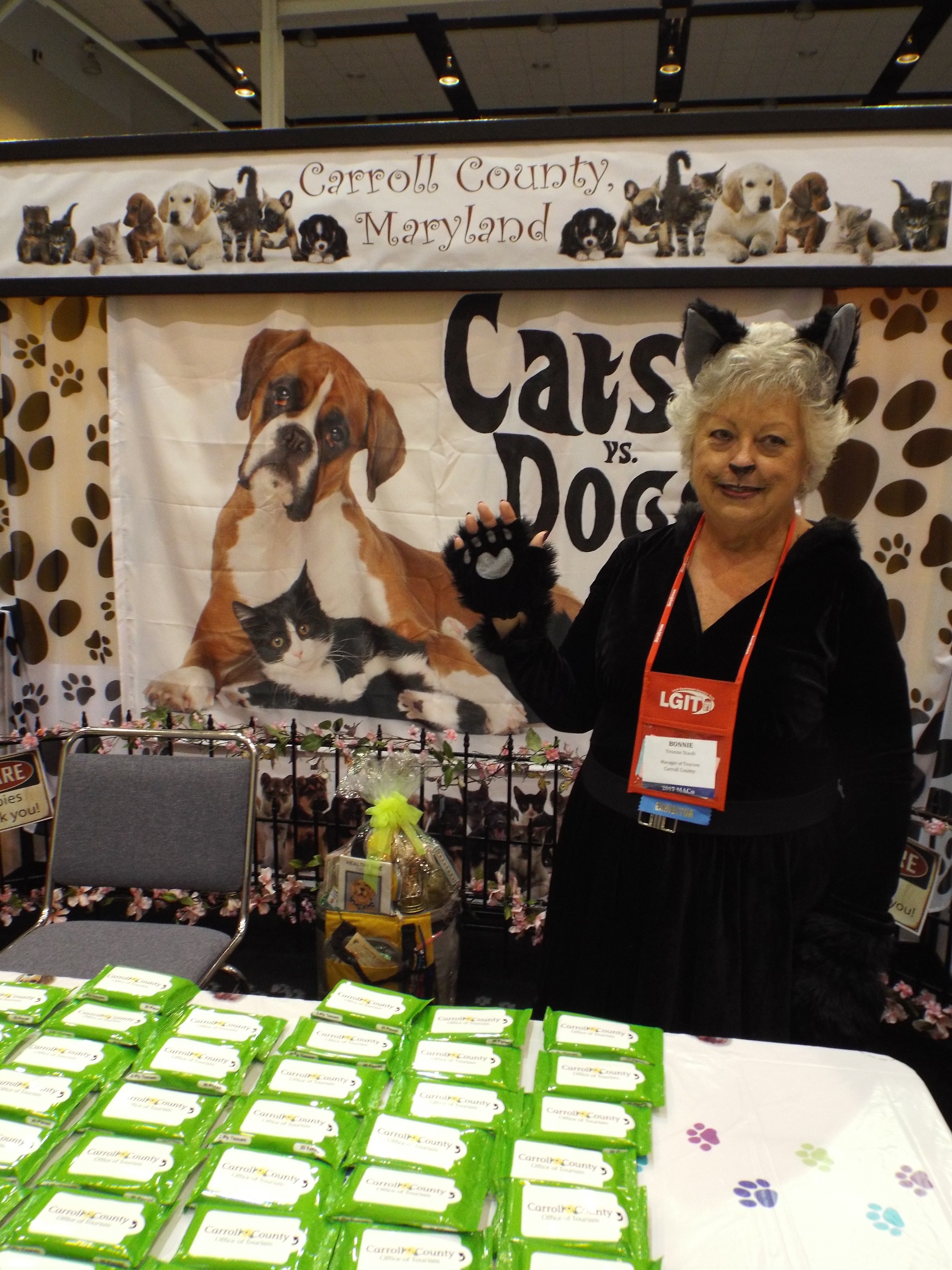 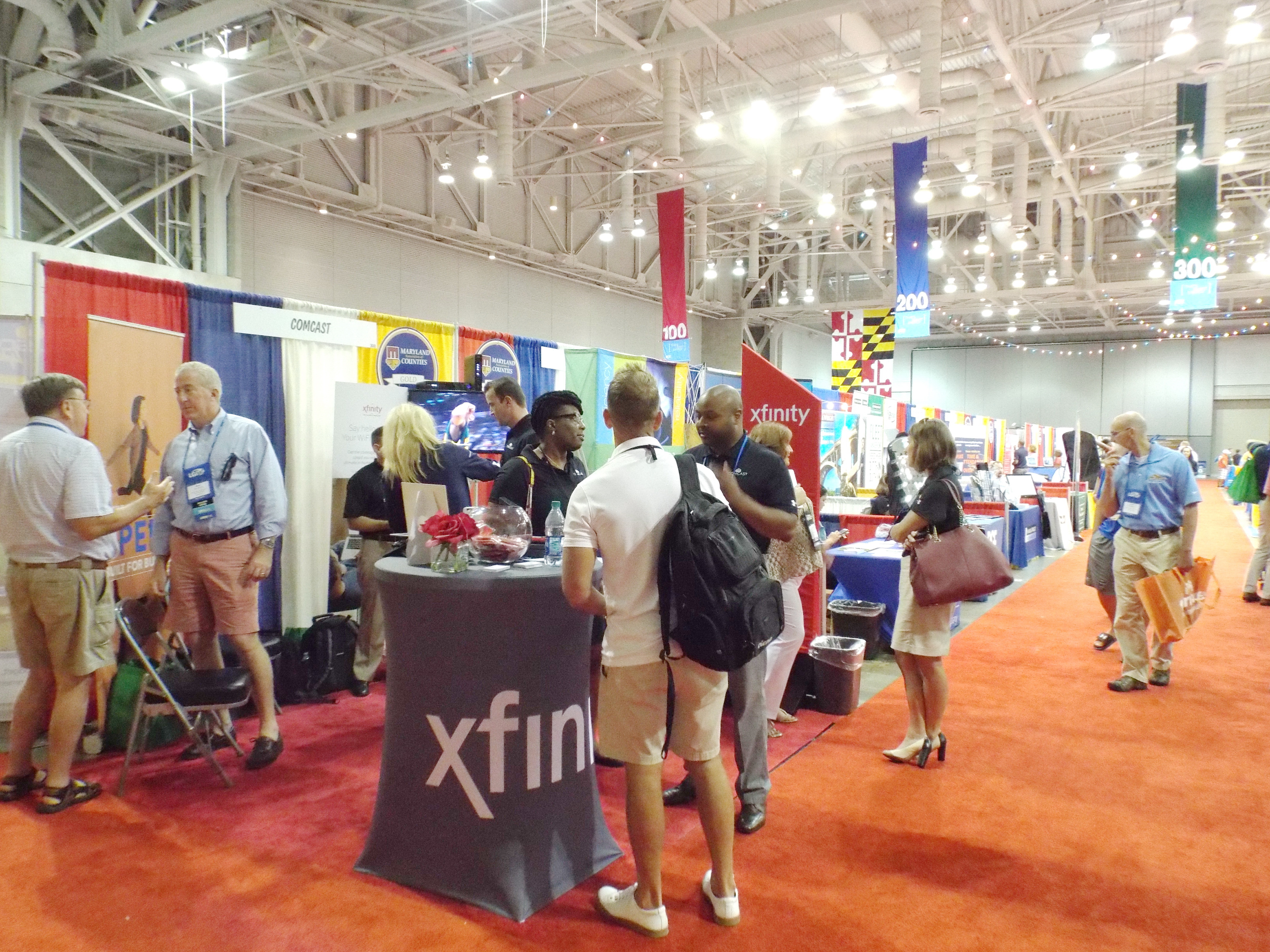 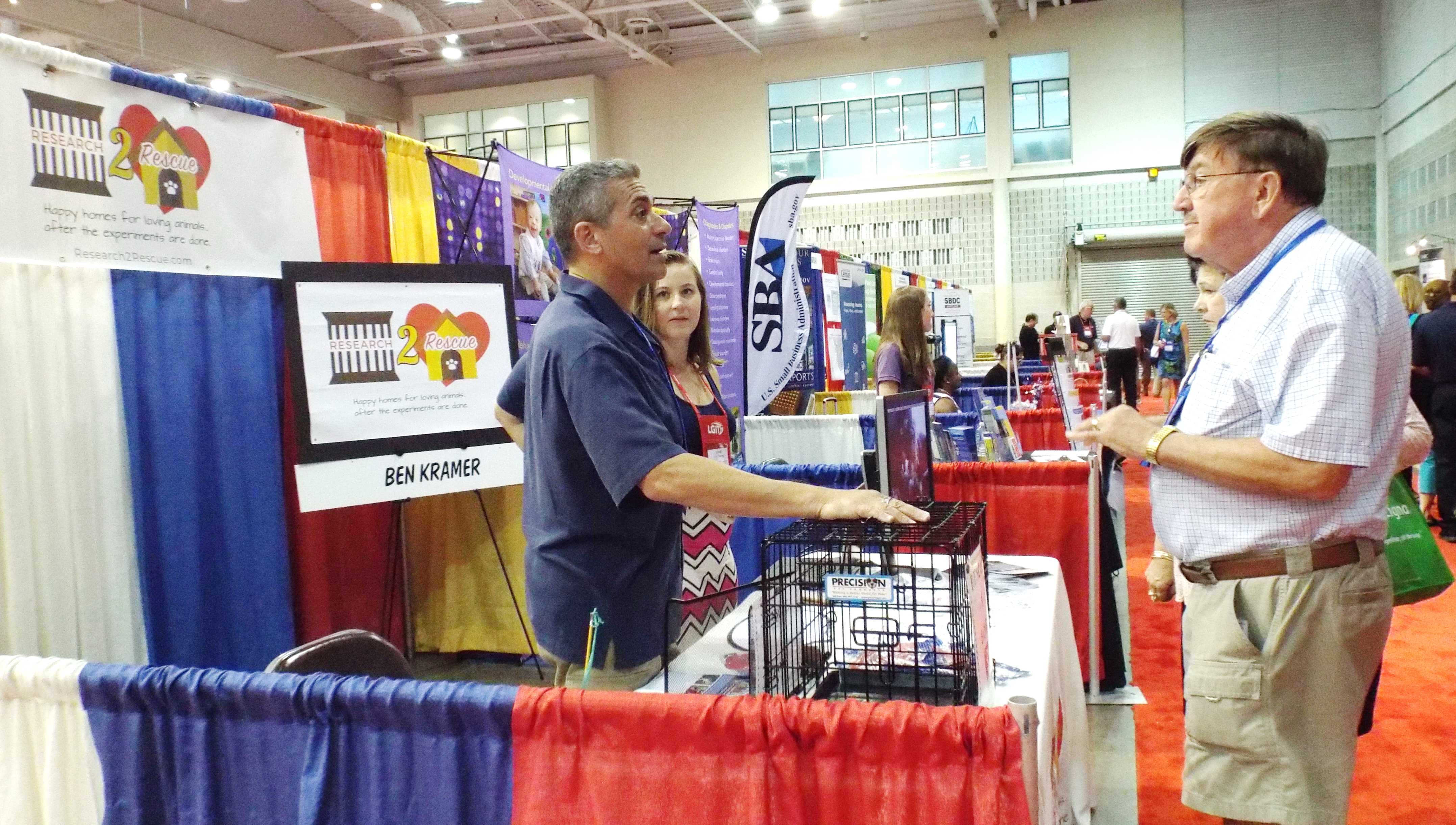 Del. Ben Kramer, left, explains his legislation to force universities to put their laboratory dogs up for adoption. MarylandReporter.com photo by Rebecca Nelson 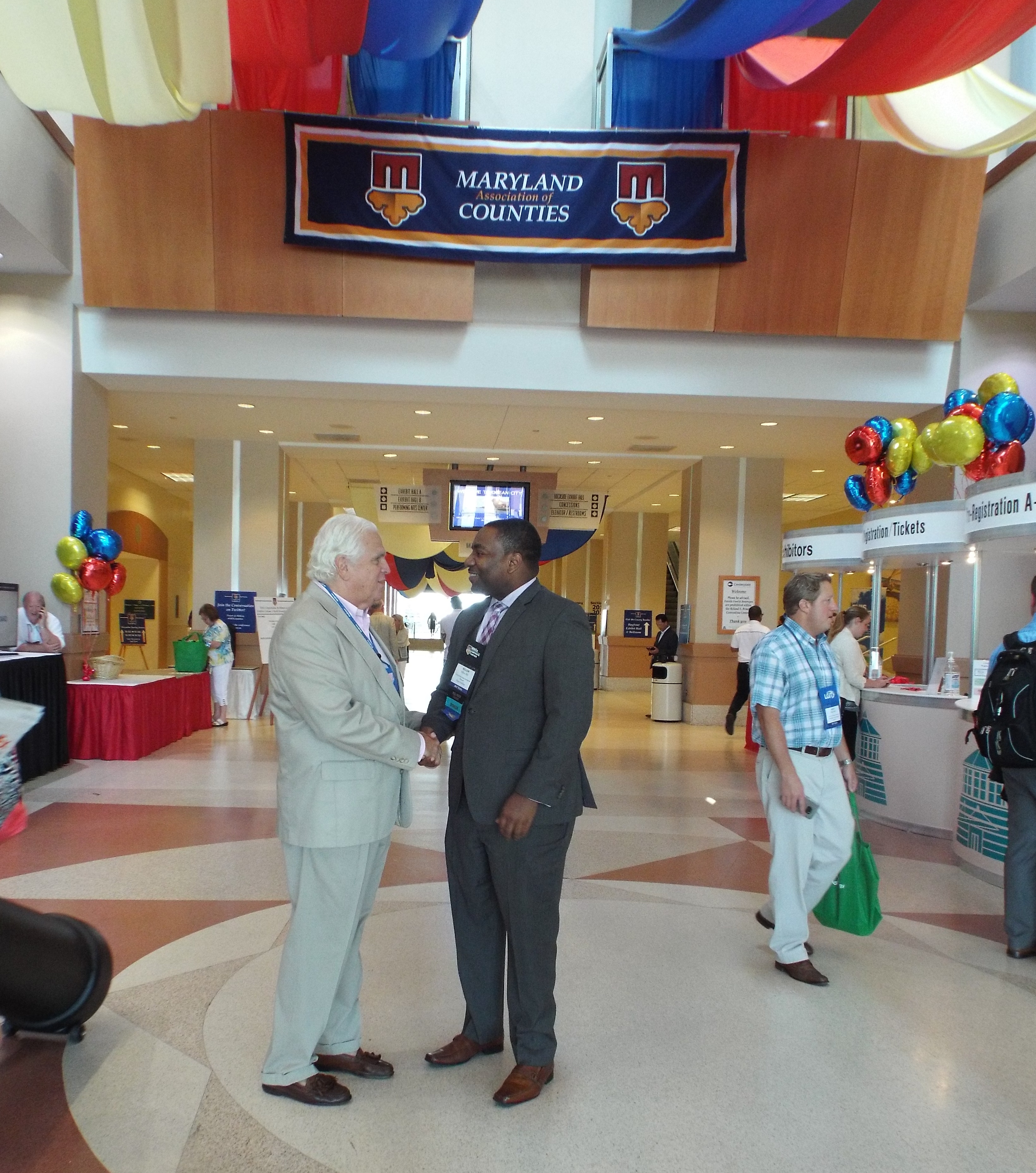 Senate President Mike Miller, left, was one of many legislators working the halls at MACo. MarylandReporter.com photo by Rebecca Nelson. 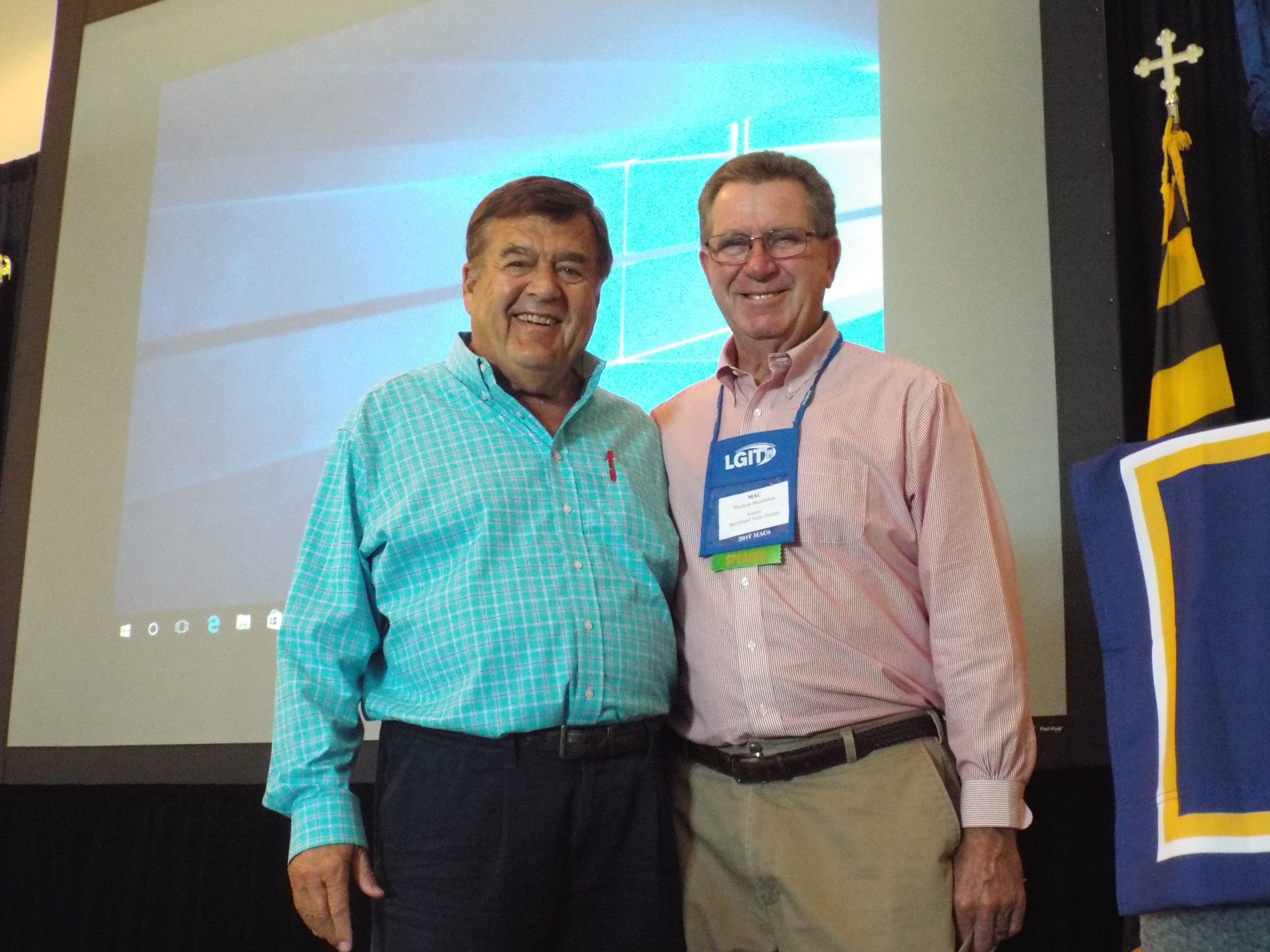 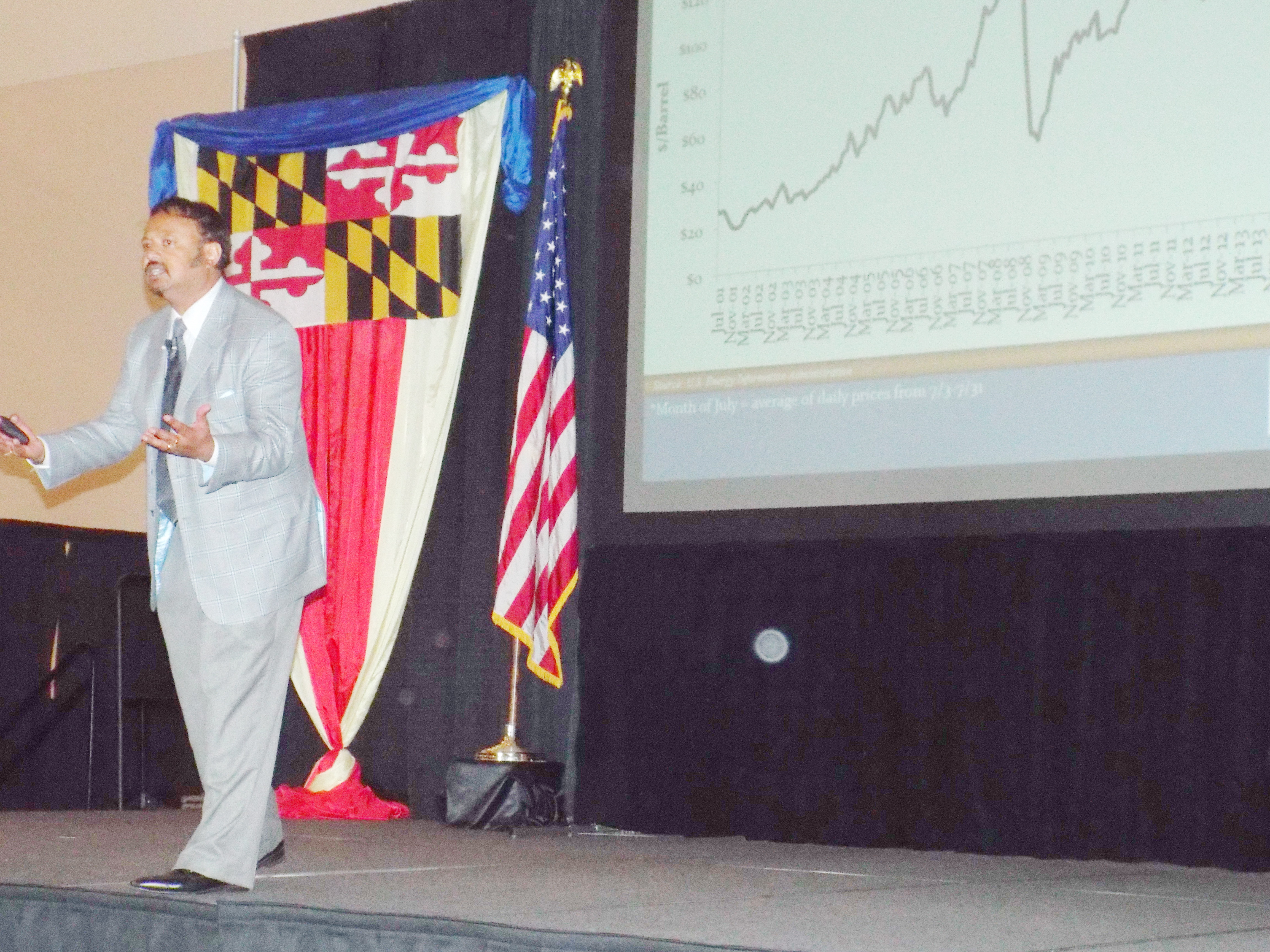 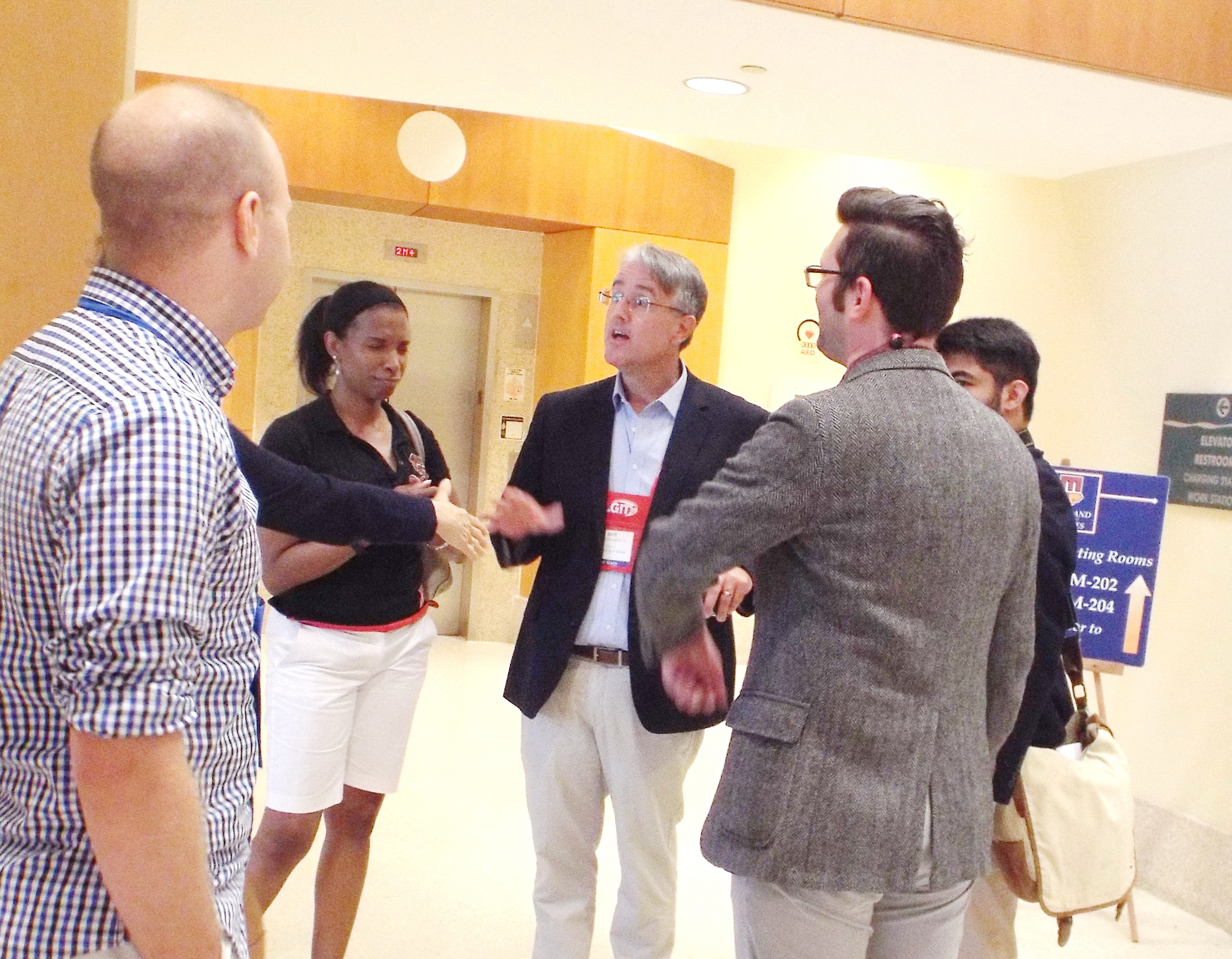 Sen. Richard Madaleno of Montgomery County, center, was one of several Democratic candidates for governor at the conference. MarylandReporter.com photo by Rebecca Nelson 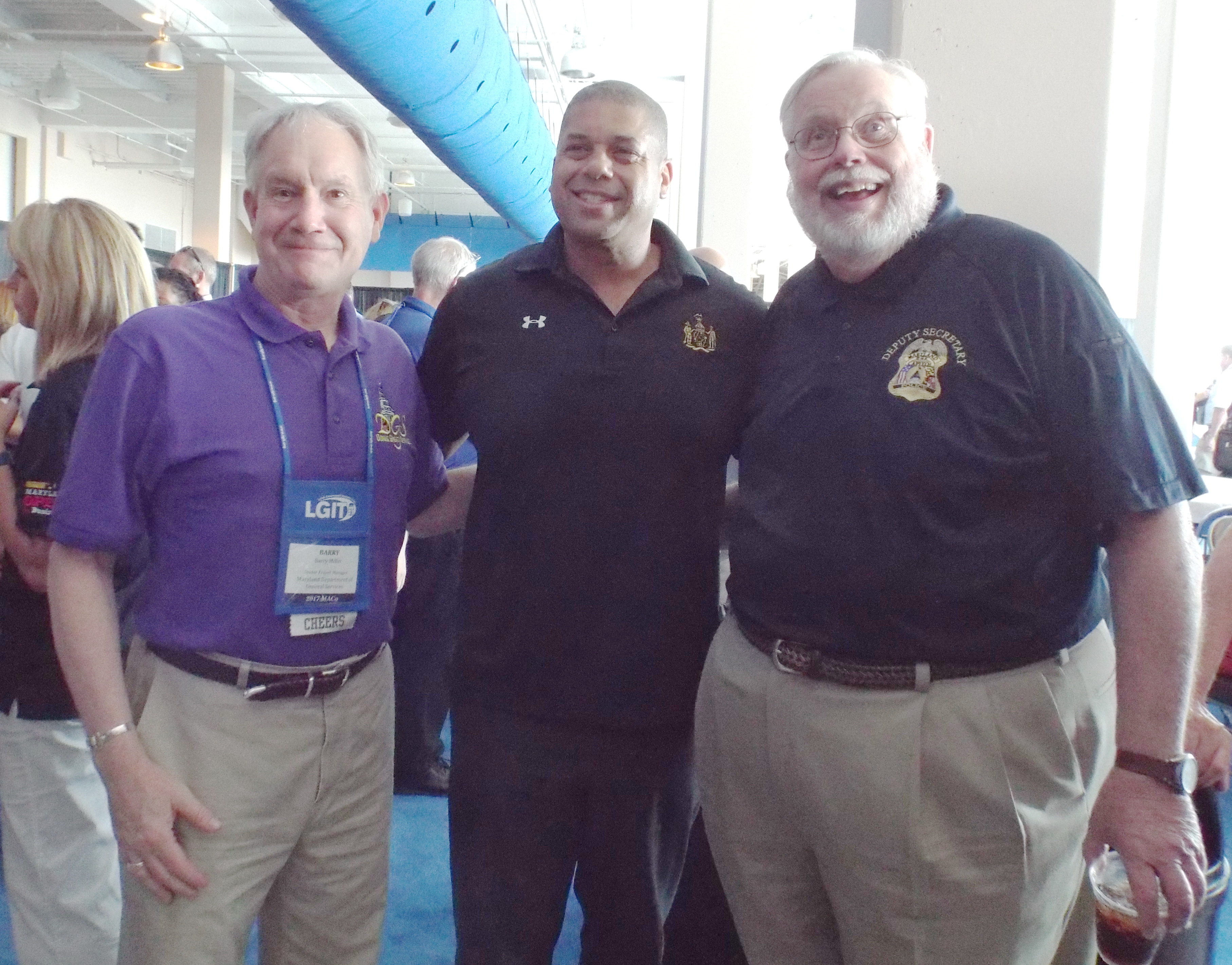 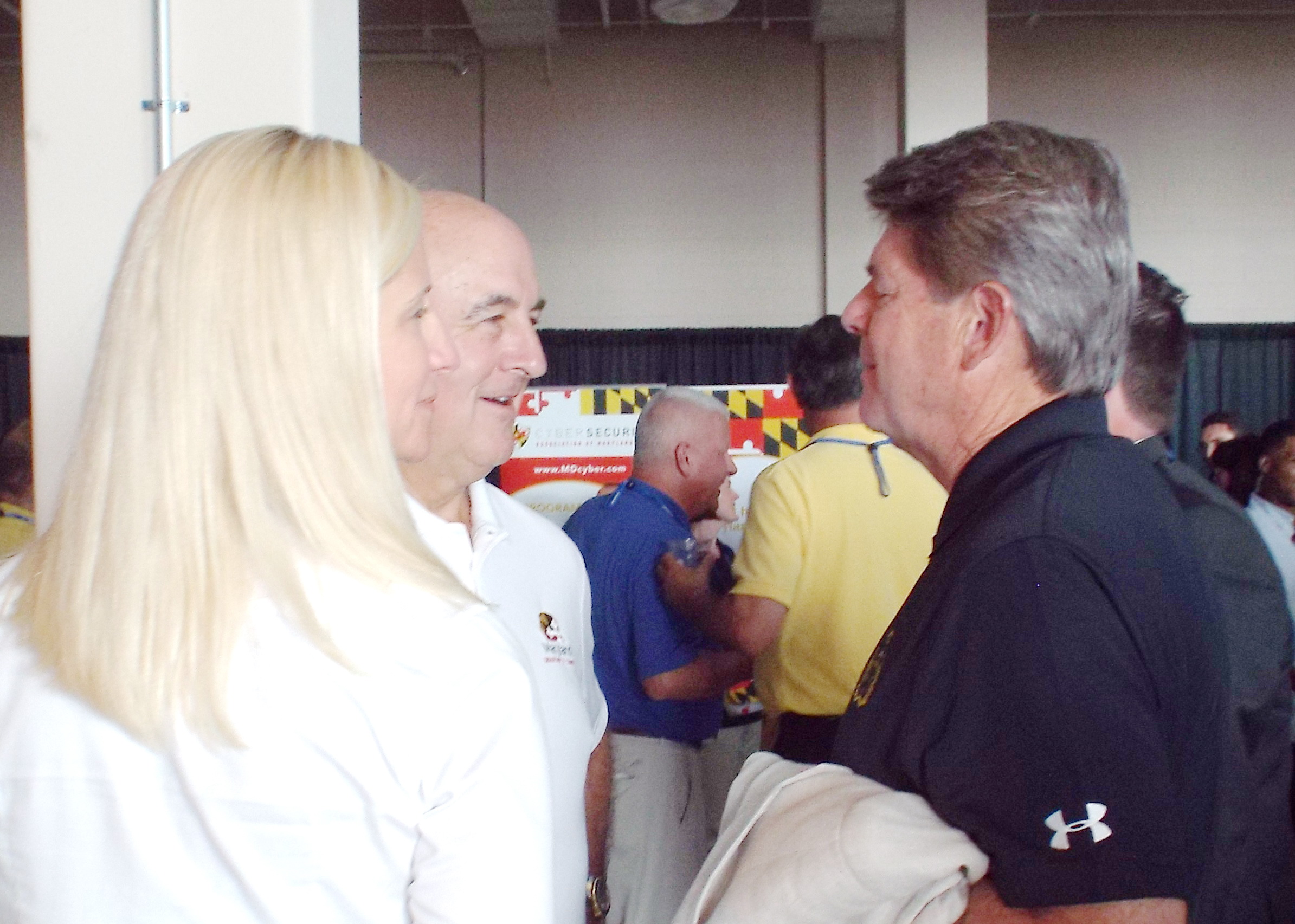 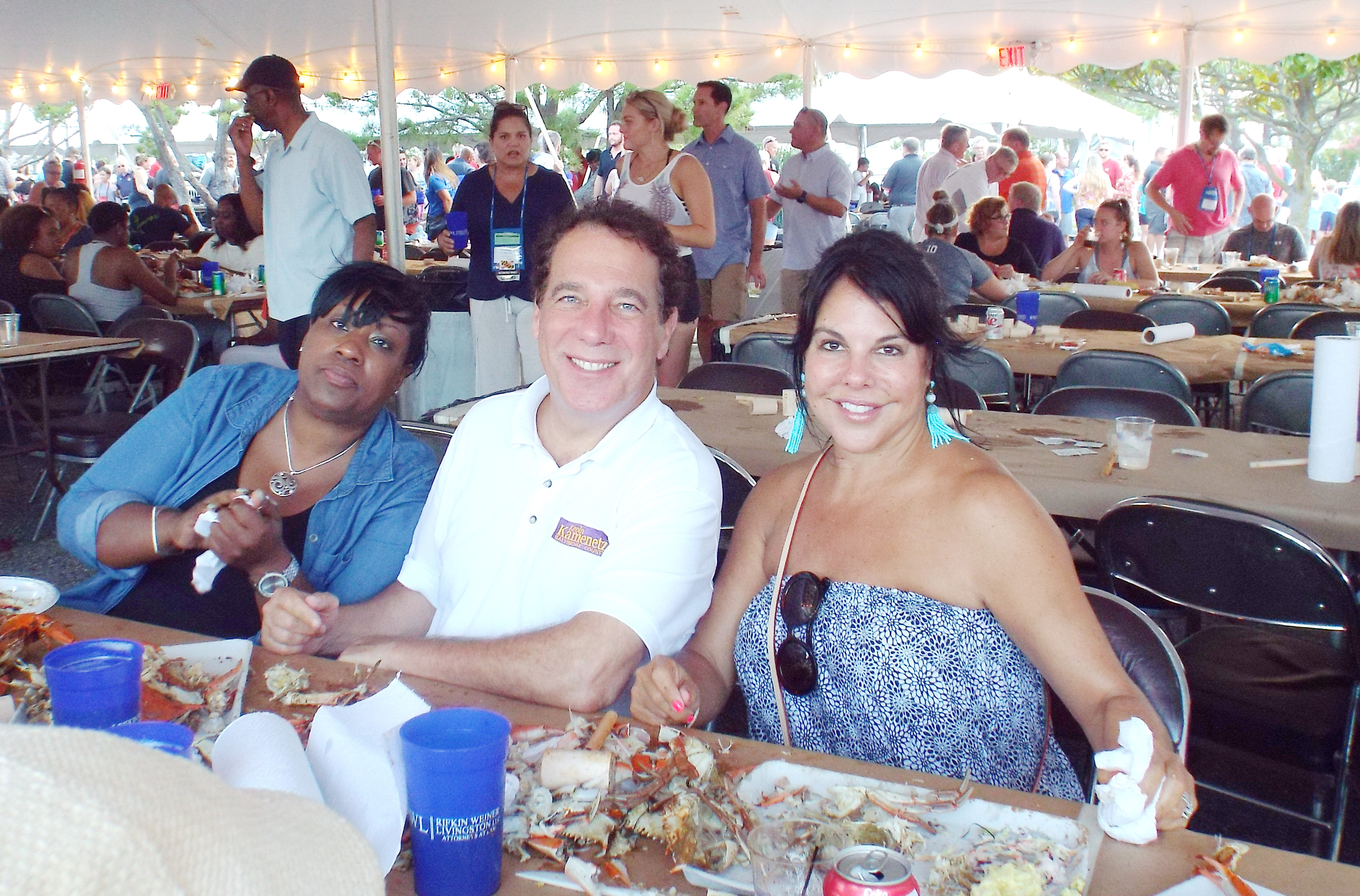 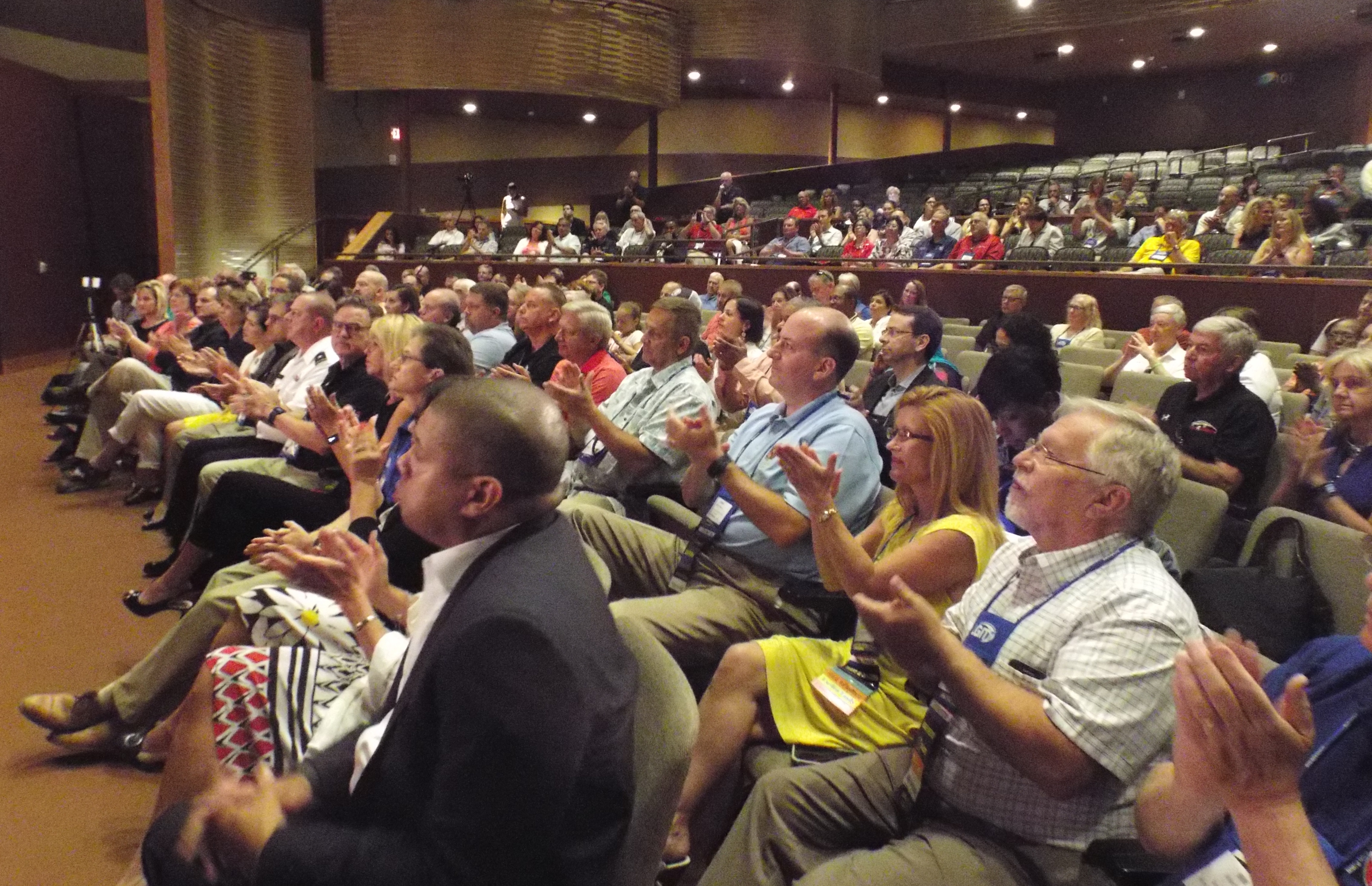 Members of the Hogan cabinet in the first row and county elected officials applaud the governor's speech. MarylandReporter.com photo by Rebecca Nelson.

As they’ve done since the 1970s, hundreds of county officials flocked to the Ocean City Convention Center this past week to snooze and schmooze at the annual summer conference of the Maryland Association of Counties (MACo).

Snooze is what most of their constituents would be doing at the scores of conference sessions on the nitty-gritty of local government, from planning and appeals to hiring and tourism. Attendance is actually quite good, and some sessions are packed.

Schmooze is what the county officials do in the casual atmosphere of a chilly convention center and at the many receptions that begin in the late afternoon and stretch into the wee hours, with open bars and free food.

“They find they learn the most from the informed discussion with their peers,” said Baltimore County Executive Kevin Kamenetz, this year’s MACo president.

Gov. Larry Hogan spent a full two days at the conference and the ocean resort. In a tradition begun by Gov. William Donald Schaefer 30 years ago, the Hogan cabinet was on hand for meetings and casual buttonholing for most of Friday.

The governor’s speech Saturday morning was the traditional close of the conference.

Republican Hogan got a boisterous standing ovation. A majority of county elected officials in Maryland are Republican, though Democrats control the five largest jurisdictions.

The only real news in a speech that contained the usual boilerplate about administration accomplishments was that Hogan was officially killing Plan Maryland, the controversial smart growth guidelines from the final O’Malley years.

“Local elected officials have repeatedly asked for a better plan,” Hogan said. He issued a new executive order that “will finally put local planning authority back in the hands of local governments, where it belongs.”

Democrat Kamenetz, a frequent Hogan critic considering a run for governor, was not impressed. For the most part, “he’s taking credit for things that are beyond his control,” like record spending on schools.

Economist not so cheery

There was no reason to cheer Friday’s presentation by economist Anirban Basu, Maryland’s most flamboyant practitioner of the dismal science who’s becoming a fixture at MACo.

Hogan has touted the number of jobs added since he took office, and “we’re going just fine” on that score Basu said. “We’re in the top 10 in job growth” in the U.S. and “metropolitan Maryland is doing just fine.”

But there continue to be wide gaps between job growth in central Maryland and rural counties, which continue to lose both jobs and population.

“We’re very far away from being one Maryland,” Basu said. “There are still two Marylands.”

Basu, like other economists, is worried that “the world is stuck in debt,” putting a drag on the economy. In the U.S., economic growth is largely fueled by consumer spending.

“By this time in 2019, the economy could be in a far different place and likely will be,” Basu said.