Hours after the House of Delegates gave final approval to broad new powers for Attorney General Brian Frosh to sue the federal government, he was in front of a House committee asking for $1 million a year to hire five lawyers for his new mission.

The delegates approved the new powers for the Democratic AG to go after the Trump administration without the permission of Republican Gov. Larry Hogan in a straight party line vote 89-50, with all Republicans opposed.

Republicans on the House Health and Government Operations Committee wondered why the fiscal analysis of the just passed Maryland Defense Act, SJ5, and its House companion, HJ3, stated that “The Office of the Attorney General can use existing resources to handle any litigation initiated as a result of the resolution,” yet here he was asking for a million dollars in mandated spending in HB913.

The mandated spending would not kick in until the fiscal 2019 budget begins July 1, 2018. For the next 16 months, Frosh would be using existing attorneys in his main office, but they would be pulled from other duties, he said.

The new spending mandate was sponsored by Del. Sandy Rosenberg, D-Baltimore, who also was the lead sponsor of the House joint resolution. The bill contains the same language as the resolutions authorizing the attorney general to pursue lawsuits.

The bill and the resolution explicitly mention “ensuring the availability of affordable health care; safeguarding public safety and security; protecting civil liberties; and preserving and enhancing the economic security of workers and retirees” along with protection of consumer rights, pensions, the environment and “the general health and well-being of [state] residents.”

A key difference between what the House passed Wednesday morning and the bill in committee is the joint resolutions go into effect immediately without the signature of the governor and HB913 is regular legislation that needs the governor’s OK.

“We’re opposed to mandated spending,” said Hogan communication director Doug Mayer, who refused to speculate about whether the governor would veto the bill. Hogan has consistently pushed legislation to reduce spending mandates, not increase them, since they control over 80% of the discretionary general fund budget.

Asked how they arrived at a figure of $1 million for five new assistant attorneys general and support staff, Rosenberg and Frosh said the model was a federalism division in the office of the Oklahoma Attorney General Scott Pruitt, a Republican.

Pruitt has been nominated as head of the Environmental Protection Agency, an agency he has sued 14 times.

Frosh said he might wind up suing Pruitt if he tries to dismantle the Chesapeake Bay clean-up, an EPA program that was the subject of a Pruitt lawsuit. 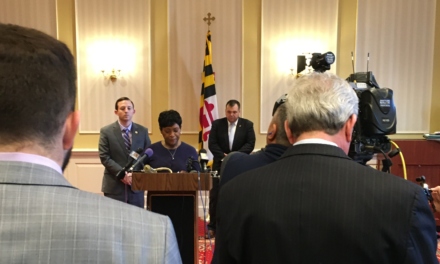