FBI HQ COMPETITION: Maryland lawmakers have been jockeying for years to lure the new headquarters for the Federal Bureau of Investigation — and its 11,000 jobs — to Prince George’s County. On Tuesday they officially found out who the competition is. The General Services Administration released its long-anticipated list of sites it says could accommodate the federal law enforcement agency. Two of the three properties are in Maryland — one in Greenbelt, the other in Landover. The third potential site is in Springfield, Va., reports John Fritze for the Sun.

MEDICAL MARIJUANA: WYPR’s Fraser Smith and Michael Dresser of the Baltimore Sun talk about Maryland’s medical marijuana commission and why one important lawmaker is criticizing a few of its proposed regulations.

TRUTH IN CRAB LABELING: A bipartisan team of Chesapeake Bay-area legislators wants to stop what the group says are misleading labeling practices when it comes to crab meat. Sen. Barbara Mikulski and three Virginia legislators last week sent a letter to Barack Obama to request that the administration include deceptive labeling in a White House task force focusing on illegal fishing and seafood fraud, Jenny Hottle writes in the Daily Record.

MODEL CORRECTIONAL FACILITY: Tapping and swiping through textbooks on clear plastic computer tablets, 11 inmates at the Montgomery County Correctional Facility spent a few hours Monday afternoon solving for the square root and computing three common averages — mean, median and mode, reports Kate Alexander in the Gazette. Such courses are just one piece of the Clarksburg jail’s program to educate and train inmates for re-entry into the community and the workforce, a program that has become a model for the nation. The jail also has an American Job Center. U.S. Secretary of Labor Thomas Perez, U.S. Attorney General Eric Holder and County Executive Ike Leggett dropped in on the class Monday as part of a tour highlighting the jobs program and its success.

PEROUTKA TO HOLD PRESS CONFERENCE: Michael Peroutka, who is running for a seat on the Anne Arundel County Council, will hold a press conference today to address recent controversy about his affiliation to League of the South, Rema Rahman writes in the Annapolis Capital. Peroutka’s campaign said Tuesday it would address allegations made against him by Carl Snowden, the organizer of the Caucus of African-American Leaders.

***GIVE US A FEW MINUTES OF YOUR TIME: To help improve our coverage and provide foundations and advertisers with more information about our readers, will you kindly take a few minutes to fill out our subscriber survey? It is just 12 simple questions and will take less than 5 minutes of your time. We would appreciate it very much. Thank you in advance for helping us. https://www.surveymonkey.com/s/July2014SurveyMarylandReporter***

McCONKEY SUIT DISMISSED: An Anne Arundel County Circuit Court judge has dismissed a foreclosure suit against Del. Tony McConkey and his wife, reports Alex Jackson for the Annapolis Capital. First Home Mortgage Corp. alleged in the suit filed April 10, 2013, that McConkey and his wife, Susan, defaulted on a $600,000 loan for a house they’ve owned since at least 2007 in the 200 block of Cypress Creek Road in Severna Park

MEET AND EAT: In a column for the Annapolis Capital, Rick Hutzell writes that the 69th annual Annapolis Rotary Crab Festival matches up 350 bushels of steamed crabs and 2,500 hungry diners. No estimate of politicians is ever given. Democrat George Johnson will be there, and so will Republican Steve Schuh. The candidates for county executive are pros at campaigning and know you don’t want to have J.O. or Old Bay seasoning all over yourself when you meet the crowd. Is there a proper way for a politician to meet and still eat?

PG COUNCIL OKs LONGER TERM LIMITS: This fall, voters in Prince George’s County will decide whether the county executive and County Council members should be allowed a third consecutive term or be limited to the two terms currently allowed under the law, reports Jamie Anfenson-Comeau for the Gazette. Before breaking for its August recess, the Prince George’s County Council unanimously approved a bill on July 23 to increase term limits for County Council members and the county executive from two to three consecutive four-year terms.

CASINO FUND CONTROL: A community advisory panel would get more control over unused impact funds from Maryland Live! under a bill proposed by Anne Arundel County Councilman Daryl Jones passes. One year after the county approved $1.9 million for a community center in Severn, the majority of the funds are sitting idle after the nonprofit set to receive it shut down, reports Zoe Read in the Annapolis Capital.

SNOWDEN’S SPOT: Longtime Annapolis political fixture Carl Snowden went into Monday’s City Council meeting at risk of losing his spot on the Housing Authority board of commissioners, writes Jack Lambert in the Annapolis Capital. He left the meeting with his spot intact — even after he had delivered a lengthy speech against the mayor — and a new position as chairman emeritus. The City Council postponed the appointment Monday of Snowden’s replacement to the board of the Housing Authority of the City of Annapolis, saying she had not appeared before the council’s committee on housing and community development. 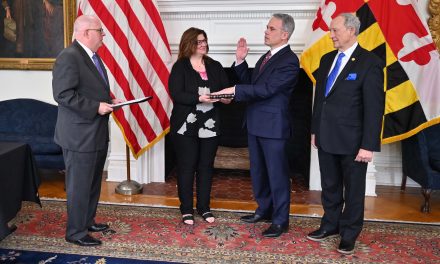