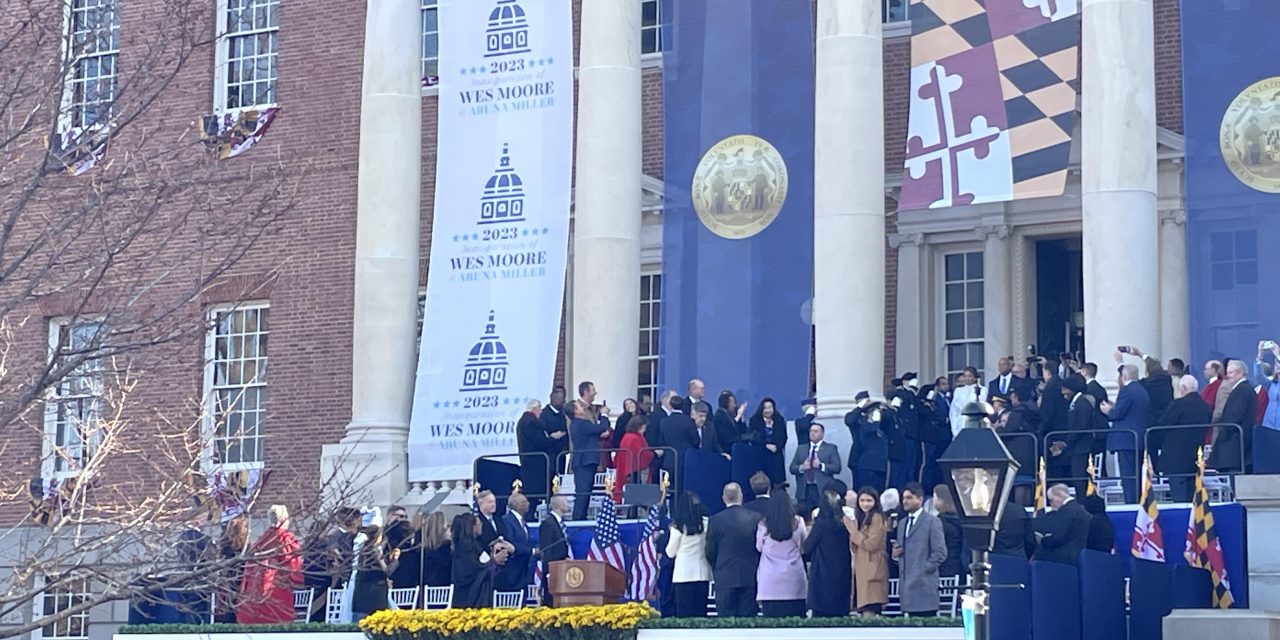 ANNAPOLIS — In a star-studded inauguration ceremony Wednesday, newly sworn-in Maryland Gov. Wes Moore captivated the crowd with the same energy and vision that launched his political ascension last year. Emphasizing themes of unity and forward progress, Moore promised to lift people out of poverty, become a leader in clean energy technology and create a path of service for the state’s youth.

“No,  yes, Aruna’s and my portraits are going to look a little different from the ones we’ve always seen in the capitol. But that’s not the point. This journey has never been about ‘making history’. It is about marching forward,” Moore said. “Today is not an indictment of the past; it’s a celebration of our future. And today is our opportunity to begin a future so bright, it is blinding. But only if we are intentional, inclusive, and disciplined in confronting challenges, making hard choices, and seizing the opportunity in front of us.”

“I  always walk away from a conversation with Wes Moore with a new perspective, with new ideas, with a new way of seeing things. A new burst of positive energy. That’s what you do for people,” said Winfrey, who introduced him to the audience arrayed in front of the portico steps of the Maryland State House.  “This might be his first day as an elected official but Wes Moore has been a public service servant his entire adult life. There’s so much more to come. He’s just getting started.”

Moore took the oath of office at noon on a Bible that once belonged to author and orator Frederick Douglass, who was born enslaved in Maryland and later became known for his fight for the abolition of slavery.

“As I stand here today, looking out over Lawyers’ Mall, at the memorial to Justice Thurgood Marshall, it’s impossible not to think about our past and our path. We are blocks away from the Annapolis docks, where so many enslaved people arrived in this country against their will. And we are standing in front of a capitol building built by their hands,” Moore said.  Those people’s history was lost or stolen, he said, but progress has been made and he promised to continue it.

“And it is a shared history – our history – made by people who, over the last two centuries, regardless of their origin story to Maryland, fought to build a state, and a country, that works for everybody,” Moore said.

In the Democratic primary, Moore received 33.8% of the vote, enough to beat out competitors Tom Perez (28.3%) and Peter Franchot (21.5%). Moore then went on to defeat Republican Dan Cox overwhelmingly in the General Election, capturing 64.5% of the vote.

Miller was born in Hyderabad, India, and moved with her family to the U.S. at age 7. She is a civil engineer who worked with the Montgomery County Department of Transportation for 25 years and served in the General Assembly from 2010 until she was tapped to be Moore’s running mate.

“We will address the inequities of the past and build a Maryland where everyone will thrive. Our fortunes are tied together in ensuring that we create a state where we grow equitably. It will take all of us together to achieve this vision,” Miller said. “Together, with you, we will write the next chapter of Maryland’s history, a chapter that will be filled with real-time heroes like you.”

During his inaugural address, Moore also reflected on his life’s journey to Annapolis. Specifically, he highlighted how his time in the military shaped his leadership style and will inform his legislation.

“My years of service transformed me. My character was strengthened, my vistas were widened, my leadership was tested. I want every young Marylander, of every background, in every community, to have the opportunity to serve our state,” Moore said. “That is why we will offer a service year option for all high school graduates. A year of service will prepare young people for their careers — and provide our state with future leaders: public servants we desperately need.”

Moore, who graduated from Valley Forge Military College, served as a captain and paratrooper with the U.S. Army’s 82nd Airborne, including leading troops into combat in Afghanistan. Two members of his Cabinet, Secretary of Housing & Community Development Jake Day and Secretary of Veterans Affairs Anthony Woods, also are combat veterans. Moore said service can be a catalyst for young people in Maryland, as it was for him.

The governor challenged the state to reject the norms that have failed many and enter this period of change with optimism and unity.

“Maryland is home to spectacular natural beauty, dynamic industries, and people as talented as they are determined. But…the truth is: Maryland is asset-rich and strategy-poor and for too long, we have left too many people behind,” Moore said. “We’ve been asked to accept that some of us must be left behind. That in order for some to win, others must lose. And not only that: We have come to expect that the people who have always lost… will keep losing. Well, we must refuse to accept that.”

While Moore has made it clear that tomorrow is a working day, today provides an opportunity for Marylanders to envision a brighter future. 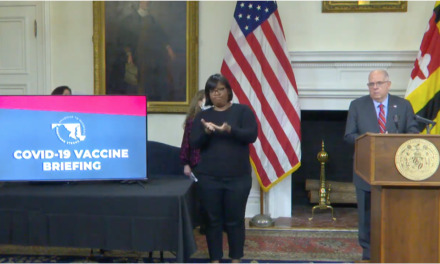