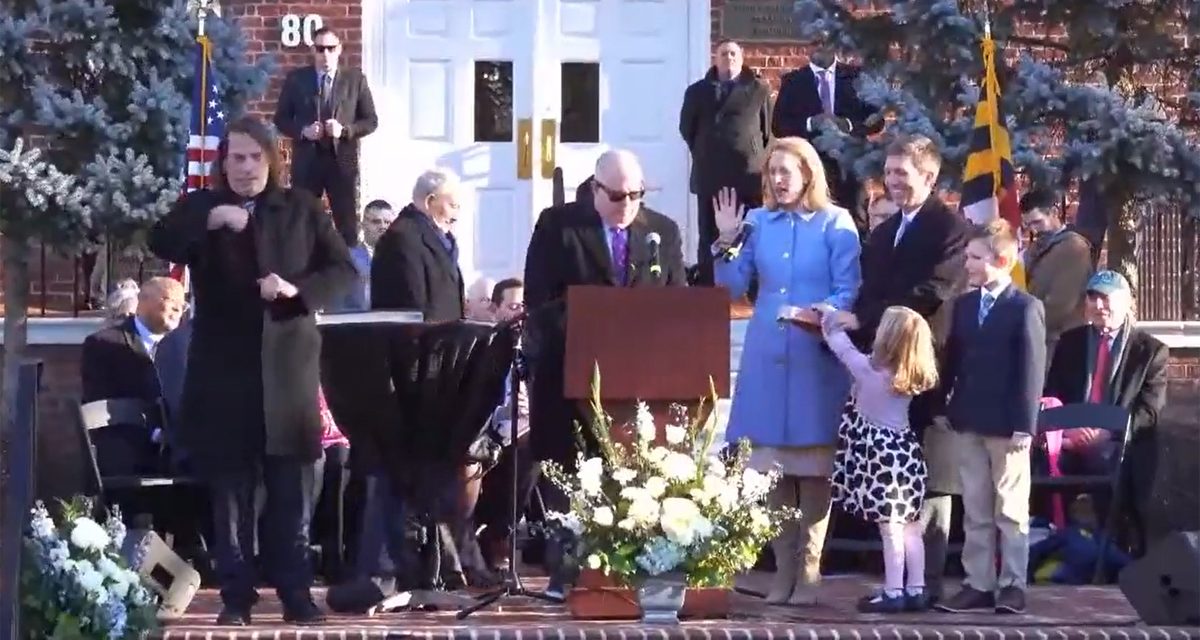 Brooke Lierman raises her hand to take the oath of office for comptroller of the state of Maryland, administered by outgoing Gov. Larry Hogan with the littlest member of Lierman's family also participating. Screenshot from official video.

MOORE TO BECOME 5th BLACK GOVERNOR IN NATION’s HISTORY: When Wes Moore raises his right hand and promises to uphold the laws of the state on Wednesday, he’ll be just the fifth Black man to do so in the history of this nation, and the first ever in the state of Maryland. Moore, a 44-year-old Democrat, comes to the job of governor of Maryland with high expectations, both from himself and from national Democrats who are looking for a new generation of leadership. Pamela Wood/The Baltimore Banner.

INAUGURATION TO BE A WALK THROUGH MARYLAND HISTORY: The inauguration day of Westley Watende Omari Moore as Maryland’s first Black governor is shaping up to look like a walk through history. An early morning visit to the Annapolis docks where enslaved Africans once arrived on Maryland’s shores. An oath of office using a Bible owned by Frederick Douglass. An inaugural speech just steps from a statue of Thurgood Marshall that marks the spot where he argued as a young lawyer before becoming the first Black justice of the U.S. Supreme Court. Sam Janesch/The Baltimore Sun.

HOGAN LEAVES OFFICE WITH CONTINUED HIGH JOB APPROVAL RATINGS: Gov. Larry Hogan (R) will leave office Wednesday with the same stratospheric job approval ratings that he’s enjoyed for most of his time in office. A recent poll conducted for Gonzales Research & Media Services showed Hogan leaving office with an eye-popping 77% of Marylanders approving of the job he’s doing as governor. That’s just one tick below the 78% high-water mark he received two other times. Josh Kurtz/Maryland Matters.

HANDFUL OF BILLS ADDRESS HEALTH OF MARYLANDERS: A handful of the nearly 300 bills that were pre-filed by state lawmakers have the potential to directly affect the health and well-being of Marylanders this year or in the near future. One bill would allow people on supplemental nutrition assistance programs to use those SNAP benefits for diapers and menstruation products. Another would provide single-payer, universal health care to Maryland residents. Scott Maucione/WYPR-FM.

BILL WOULD ALLOW JURISDICTIONS TO HIKE INCOME TAX ON HIGH EARNERS: A bill heralded by progressive lawmakers would allow Montgomery County and other jurisdictions in Maryland to raise income taxes on high-earning residents by a half-percentage point to provide tax relief for low- and moderate-income families. The bill would increase the maximum allowable income tax rate from 3.2% to 3.7%. Em Espey/Bethesda Beat.

ADVOCATES FOR AID IN DYING CHEER MOORE SUPPORT ON END-OF-LIFE DECISIONS: Advocates of medical aid in dying are cheering recent statements by Gov.-elect Wes Moore in support of patients having the option. Moore was asked last week at a summit about his support for “bodily autonomy” in the context of end-of-life decisions. He spoke about his own experience with family members near death and said, as a state, Maryland should protect the ability for people to make “independent decisions about the suffering that they are enduring.” David Higgins/The Southern Maryland Chronicle.

EVICTIONS BEGIN TO RISE TOWARD 2019 RATES: After falling to an unprecedented low during the pandemic, eviction numbers are creeping back toward 2019 rates in Maryland. Over the course of nearly three years, thousands of evictions were prevented across Maryland by a combination of federal and local eviction moratoriums put in place during the pandemic, federal rental assistance funds, and court backlogs. Ryan Little and Sophie Kasakove/The Baltimore Banner.

FRIDAY HEARING ON PROGRESS OF EDUCATION BLUEPRINT: On Friday, Jan. 20, several committees of the General Assembly will be briefed on the progress of implementing the Blueprint for Maryland’s Future, the state’s landmark pubic educational reform law. Brianna January/Conduit Street.

WHAT IS IN THE BLUEPRINT? The ambitious plan became law in 2021, kicking off an enormous effort across multiple state departments, agencies and 24 public school systems that will take a generation of students to complete. Officials leading the endeavor forecast that its effects might not be fully apparent until the cohort of students entering prekindergarten in fall 2022 graduate from high school in 2036. Lillian Reed/The Baltimore Sun.

COLUMN: GROWING UP IN THE GOVERNOR’S MANSION: Mia and James Moore, the young children of Gov.-elect Wes Moore and his wife, Dawn, are about to join an exclusive list of children in Maryland history, moving into the governor’s official home in Annapolis, Government House. Those who have lived there prior say there will be wonderful experiences they’ll never forget — and moments that are, frankly, harder because they will be lived in the public eye. Rick Hutzell/The Baltimore Banner.

SOUTHERN MARYLAND HERITAGE ACT GETS FEDERAL APPROVAL: The Southern Maryland National Heritage Area Act was passed by Congress and signed by President Joe Biden, bringing about an important designation to boost awareness of the counties of Calvert, Charles, St. Mary’s, and southern Prince George’s. This designation recognizes the area’s unique significance to the nation’s history and will bring together federal, state, and private resources to promote heritage tourism, conserve natural landscapes, and enhance the local economy. Victoria Maas/Conduit Street.