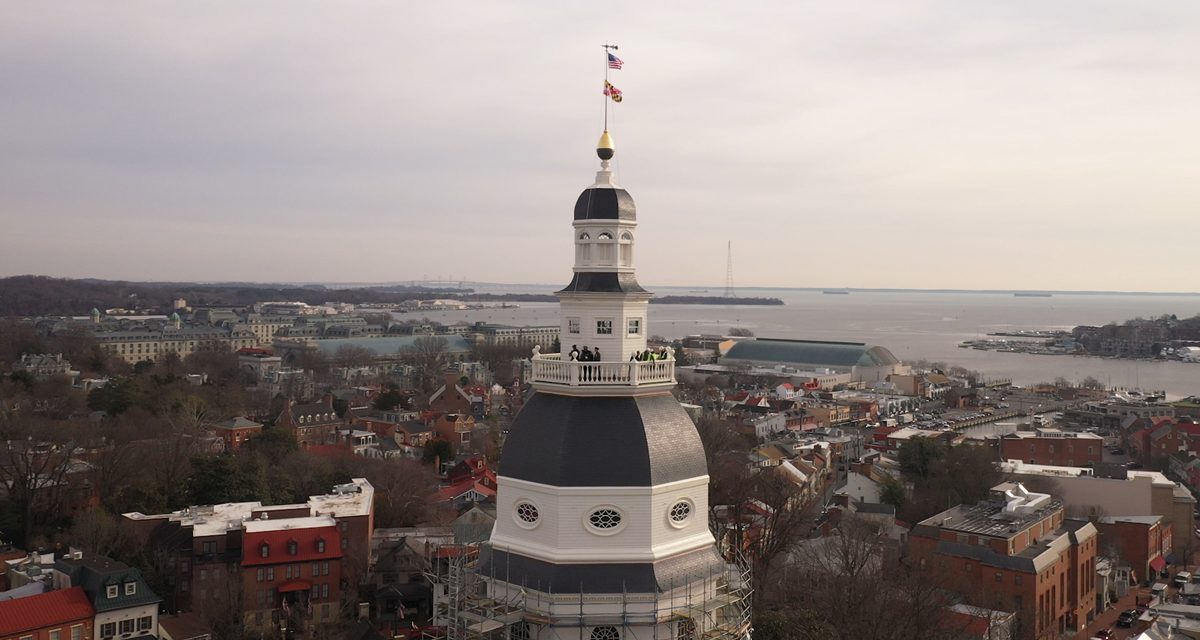 DOME RENOVATION COMPLETE: On the eve of the 445th General Assembly, Gov. Larry Hogan announced that the state has finished "the most extensive renovation of the historic Maryland State House Dome in decades. The restoration of the nation's oldest U.S. state capitol in continuous legislative use began in March 2022, and preserves the dome’s 18th century historic appearance while ensuring its long-term viability." Governor's Office Photo.

HOGAN BIDS FAREWELL WITH WARNING OF ABOUT DIVISIVE POLITICS: As the final days of his tenure tick down, Gov. Larry Hogan bid farewell Tuesday night to the millions of Marylanders he governed for the past eight years. “Serving you has been the honor of a lifetime,” Hogan said in a video address, filmed in the State House’s Old Senate Chamber. “Together, we truly have changed Maryland for the better.” Pamela Wood/The Baltimore Banner.

CHANGES IN STORE FOR 445th ASSEMBLY: The 188 members of the 445th General Assembly, including 47 freshmen senators and delegates, will be sworn in at noon. By the end of next week, Maryland will have a new set of barrier-breaking leaders in control of the upper echelons of state political power: Wes Moore as the state’s first Black governor, Aruna Miller as the first Indian-American lieutenant governor, Anthony Brown as the first Black attorney general, Brooke Lierman as the state’s first woman to serve as comptroller. Danielle Gaines/Maryland Matters.

MOORE’s PRIORITIES STILL UNCLEAR: Days away from the historic inauguration of Maryland’s first Black governor and first woman of color lieutenant governor, many are anxious to learn about the new administration’s priorities. “Nothing is quiet. We continue to move at the same pace,” incoming Gov. Wes Moore said in an interview before the holidays. “We are moving very fast and are laser focused on building state government.” Bryan Sears/The Daily Record.

DEMS VOW TO PURSUE PROGRESSIVE POLICY GROWTH: Democratic elected leaders gathered in Annapolis Tuesday, on the eve of the legislature’s annual 90-day session, to celebrate a robust victory for the state Democratic party in the recent election. Incoming Lt. Gov. Aruna Miller pointed out that the Moore-Miller ticket received 1,293,944 votes, which she said is “the largest amount of votes of any gubernatorial ticket in Maryland’s history.” Rachel Baye/WYPR-FM.

WHO’LL BE DRIVING THE AGENDA? Here’s a look at 11 men and women who will be driving the agenda in the 2023 General Assembly session, leading off, of course, with Wes Moore. Staff/The Daily Record.

LAWMAKER SEEKS REPEAL OF 2022 JUVENILE CRIME BILL: On the eve of the 2023 legislative session, one lawmaker is calling for a repeal of a bill that passed last year, aiming to provide more services to juveniles who commit crimes, rather than get them into the criminal justice system after a 12-year-old was found with a gun and ammunition in an Anne Arundel County Middle School and could not be charged. Mikenzie Frost/WBFF-TV.

LAWMAKER ASKS COLLEGES TO DELAY TUITION FOR SOME FAMILIES IN 529 PLAN: Maryland colleges are responding to requests to delay tuition payments by families who were affected by problems with accounts overseen by a state agency to fund their children’s education. A group of state senators, led by Democrat Sarah Elfreth of Anne Arundel County, sent a letter Monday on behalf of almost 500 people who have said they were unable to access their full account amounts with Maryland 529. Lia Russell/The Baltimore Sun.

10 LOBBYISTS BILLED NEARLY $14.5M IN 6 MONTHS: Ten lobbyists reported billings of nearly $14.5 million, according to reports filed with the Maryland State Ethics Commission. The report, which covers the period of Nov. 1, 2021 through April 30, 2022, makes up the bulk of billings reported by lobbyists in Maryland. A second report that covers the balance of the year was not available as of press time. Bryan Sears/The Daily Record.

OPINION: OUT OF THE GATE, BEUS HARRIS DROPS THE BALL: Nicole Beus Harris has barely been on the job as Maryland Republican Party chairman for a week and she has already dropped the ball by hiring an executive director with little political success and lacking experience in Maryland then sending out a press release apparently without consulting key players in the state party. Brian Griffiths/The Duckpin.

RUTHERFORD JOINING COLUMBIA LAW FIRM: Lt. Gov. Boyd K. Rutherford is joining the Columbia law firm Davis, Agnor, Rapaport & Skalny as a new partner to develop a practice in government relations and lobbying, at the local, state and federal levels, and to expand its existing government contracting and procurement practice. (Since 2009, Davis Agnor has been the attorney of record for MarylandReporter.com Inc. At the firm’s 2013 holiday party, in response to a question from Maryland Reporter’s Len Lazarick, Rutherford said he wasn’t interested in being lieutenant governor. A month later he was on the ticket with Larry Hogan.)

POLITICAL NOTES: OTHERS ON THE MOVE: Mike Ricci, Gov. Larry Hogan’s director of communications, is headed back to school. Comptroller-elect Brooke Lierman announced the next wave of hires for her incoming administration on Tuesday, including three new deputy comptrollers. House Republicans in Annapolis, as expected, voted Tuesday to make Del. Jason Buckel of Allegany County their minority leader. Buckel has held the job since April 2022. Josh Kurtz and Danielle Gaines/Maryland Matters.