ATTEMPTS TO SWAY HOGAN: Refugees from Syria undergo an “extraordinary thorough and comprehensive” screening process that is “multi-layered and intensive” senior officials in the Obama administration wrote to Gov. Larry Hogan in a letter this week. “We want to emphasize that no one has a right to be resettled in the United States as a refuge,” according to the five-page letter, which was obtained Saturday by John Fritze of the Sun. “If the expert screener fails to be satisfied…the applicant will not be resettled in the United States.”

HOGAN ON FOX: In his first national sit-down television interview, which aired Sunday, Gov. Larry Hogan said that he knew he would face obstacles as a Republican governing a solidly blue state but that “I didn’t know cancer was going to be one of them.”  Ovetta Wiggins of the Post writes that Hogan, who was named the “Power Player of the Week” on “Fox News Sunday” with Chris Wallace (photo below), shared details about his battle with stage 3 non-Hodgkin lymphoma and his recovery. Here’s the video clip. 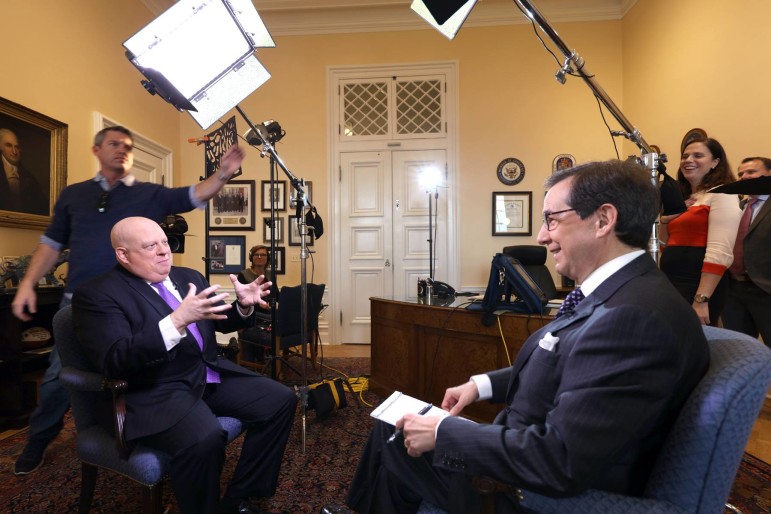 GOALS ON GREENHOUSE GASSES: A report has found that Maryland is meeting its goals for reducing greenhouse gas emissions, a relief to developers who feared a failure to meet benchmarks would have resulted in tighter regulations, Adam Bednar of the Daily Record reports. The 2015 Greenhouse Gas Emissions Reduction Act Plan Update found the state was on pace to meet its goal of cutting greenhouse gas emissions 25% below 2006 levels by 2020.

CYBER SECURITY PLANS: Protecting Maryland’s utility infrastructure and state agencies from cyber threats is the top priority for a new advisory panel comprising state and federal officials working alongside private-sector security experts, according to a CNS story by Naomi Eide in the Daily Record. The Maryland Cybersecurity Council plans to develop recommendations on how to take advantage of the cyber institutions in Maryland, create additional cybersecurity jobs and promote economic development, said Attorney General Brian Frosh, chair of the council.

VAN HOLLEN NOW IN LEAD: After weeks of targeting Baltimore-area voters with television advertising, Rep. Chris Van Hollen has opened a significant, double-digit lead in Maryland’s closely watched Democratic primary race to replace retiring Sen. Barbara A. Mikulski, according to a new poll for The Baltimore Sun and the University of Baltimore, John Fritze writes in the Sun.

DIXON IN FRONT: Former Mayor Sheila Dixon is the clear early front-runner in a crowded field to become Baltimore’s next mayor, a new poll for The Baltimore Sun and the University of Baltimore shows. Dixon, who was favored by nearly a quarter of the respondents, leads the Democratic primary race by 11 points over her closest rival, state Sen. Catherine E. Pugh, Luke Broadwater writes for the Sun.

MOSBY & MOSBY: The candidate shook hands, posed for pictures and was about to leave the shopping mall when a stranger leaned in to convey a message. “Tell your wife,” the woman said to Baltimore City Council member Nick Mosby, “?‘Thank you for speaking the truth, for hearing our voices and for not being afraid.’?” “We love your wife,” she continued, “and now we love you.” Paul Schwartzman of the Post writes about the new Baltimore Power Couple, state prosecutor Marilyn Mosby and mayor candidate and husband Nick.

CLINTON NEEDS SANDERS, O’MALLEY: If Martin O’Malley wasn’t a participant in the current presidential election cycle, Hillary Clinton would have to find a replacement figure to fill his essential role. The same goes for Bernie Sanders. He and O’Malley are perfect foils for Clinton as they seek to impress Democratic voters. Clinton badly needs the publicity that flows from a contested set of presidential primaries, writes Barry Rascovar in a column for MarylandReporter.com.

SINGLE-DIGIT O’MALLEY: Former Gov. Martin O’Malley, who is running for president, has gotten very positive media reviews after his last two national TV appearances in a forum and debate. But, writes Len Lazarick for MarylandReporter.com, it hasn’t helped him get out of the single digits in polling.

‘CAPACITY’ ON FOREIGN POLICY: Republican presidential candidate Ben Carson likens his learning foreign policy to his ability to absorb changing complex medical practices. But Carson is standing by his support for monitoring groups he describes as “anti-American” and keeping Syrian refugees out of the United States, according to a story in the Sun.