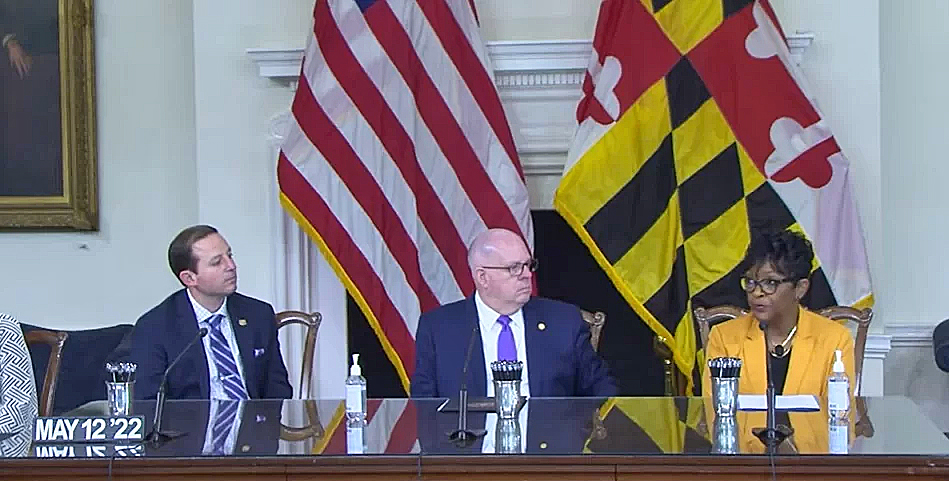 Senate President Bill Ferguson, left, and House Speaker Adrienne Jones, right, carried the legacies of their predecessors during the Hogan administration. That is no longer the case. Screen capture from Governor's Office video.

FULLY IN CONTROL: JONES, FERGUSON ENTER NEW ERA: House Speaker Adrienne Jones and Senate President Bill Ferguson are entering their fourth sessions as the leaders in their respective chambers. Both replaced legendary and record-setting presiding officers: The late House Speaker Michael Busch had the job for 17 years, and the late Senate President Mike Miller held the gavel for 33 years. But even if Jones’ and Ferguson’s tenures seem puny in comparison, the 2023 General Assembly session marks a significant milestone for each. Josh Kurtz and William Ford/Maryland Matters.

HOGAN LEAVES OFFICE WITH NO REGRETS: Maryland’s outgoing two-term Republican governor leaves office next week with no regrets and an eye on the future. Larry Hogan is scheduled to give a televised farewell speech on Tuesday night. He gave few clues Monday to what he will say (other than it won’t be “in the weeds” or “overly political”). He acknowledged he might feel a twinge of emotion at saying goodbye. Bryan Sears/The Daily Record.

HOUSE, SENATE COMMITTEES TO USE HYBRID SYSTEM FOR PUBLIC TESTIMONY: Each standing committee in the Maryland House of Delegates and Senate will implement a hybrid system for public testimony to allow for in-person and virtual testimony for the 2023 legislative session. According to a joint statement from House Speaker Adrienne Jones and Senate President Bill Ferguson, the new hybrid system aims to eliminate barriers to public participation in the legislative process and furthers the General Assembly’s commitment to limiting the spread of COVID-19, RSV, the flu, and other viruses. Kevin Kinnally/Conduit Street.

CONSULTANT SAYS CANNABIS SALES COULD HIT $1 BILLION: As the General Assembly prepares to hash out final details for legalized recreational use of cannabis in Maryland, lawmakers are learning more about the potential scale of the industry. Cannabis Public Policy Consulting, a firm based in Massachusetts that tracks and analyzes cannabis data, estimates that cannabis sales from licensed dispensaries in the state could reach $1 billion within about two years. William Ford/Maryland Matters.

COLUMN: HOW A DEMOCRAT WON A RELIABLY CONCERVATIVE STATE SENATE SEAT: The first thing you need to know about Dawn Gile is that she worked hard to capture a Maryland Senate seat that Republicans had won for most of the past 50 years. Perhaps the second thing you should know is that she had a lot of help from her fellow Democrats. The Maryland Democratic Senate Caucus poured more than $500,000 into the campaign to defeat Republican Del. Sid Saab — more than it spent on any other race in the state. Rick Hutzell/The Baltimore Banner.

B’MORE RESIDENTS SEEK TO STOP JHU POLICE: Three Baltimore residents are once again suing the Johns Hopkins University concerning the creation of a private, armed police force on campus. On Dec. 30, they asked the Circuit Court of Baltimore City to nullify the memorandum of understanding signed by Hopkins and the Baltimore Police Department on Dec. 2. The memorandum is a key document outlining the jurisdictions between the two entities and allows Hopkins to proceed with further creation of its force. Sabrina LaBoeuf/The Baltimore Sun.

STATE TROOPER ARRESTED: A Maryland state trooper was arrested Saturday and faces federal drug and bribery charges after allegedly providing information to a suspect in exchange for money. A redacted affidavit filed in U.S. District Court on Monday accused Justin Riggs of sharing investigative details, including false plans for a wiretap in February that were part of a ruse by investigators to catch the person leaking information, with someone identified only as “Drug Distributor 1.” Darcy Costello/The Baltimore Sun.

NEW BOOK DELVES INTO STATE MEDICAL EXAMINER’S OFFICE: Thousands of times a year, forensic prosecutors in the Maryland medical examiners’ office probe the details — and the bodies — of the dead to answer a basic question: How did they die. A new book, for release in February, shows how the nation’s first centralized, statewide examiners’ office seeks the information for families and prosecutors. It’s a story of high-profile and controversial investigations, but also of the rising backlog of cases stemming from surges in violence and substance use that has lead to a crisis for a once pioneering agency. Meredith Cohn/The Baltimore Banner.