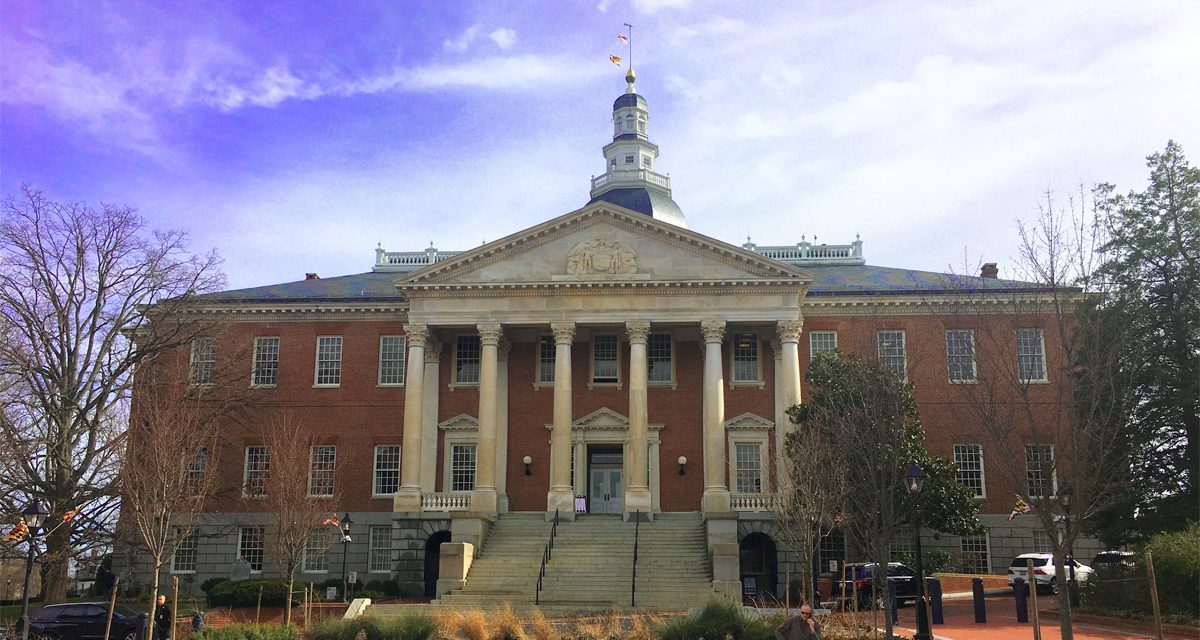 A RETURN TO NORMALCY IN ANNAPOLIS? ALMOST: Maryland lawmakers return to Annapolis this week with a new governor about to be sworn in, expanded powers over the state budget and a long list of challenges to tackle, including creating a recreational marijuana industry and further protecting abortion care in the state. And for the first time in nearly three years, lawmakers expect to have a near-complete return to pre-pandemic procedures. Pamela Wood/The Baltimore Banner.

FRESHMEN CLASS A DIVERSE GROUP OF LAWMAKERS: The freshman class of the General Assembly is a little like Maryland itself: America in miniature. The new members have a wide variety of backgrounds and interests. They range in age from 25 to 72. And they are a racially and ethnically diverse lot. Three of the eight incoming senators are women, while 15 of 40 freshman delegates are women. Josh Kurtz/Maryland Matters.

WHAT TO KNOW ABOUT WES MOORE’s INAUGURATION: Democratic Gov.-elect Wes Moore, a bestselling author and former nonprofit executive, will succeed Republican Gov. Larry Hogan on Jan. 18 as Maryland’s 63rd chief executive and the state’s first Black governor. Many details about his swearing in are still to be announced, but past inaugural ceremonies and information from the Moore-Miller Inaugural Committee about several related events give Marylanders a glimpse of what to expect. Hannah Gaskill/The Baltimore Sun.

WHAT DOES THE EDUCATION BLUEPRINT DO? For this year’s average Maryland kindergartner, the Blueprint for Maryland’s Future will be in high school by the time the program is fully implemented. Here’s what it is. What it does. But most importantly, what this means for students in classrooms trying in earnest to learn despite all the world’s challenges. Zshekinah Collier/WYPR-FM.

HARRIS THROWS 13th SPEAKER VOTE TO McCARTHY: Rep. Andy Harris, Maryland’s lone Republican in Congress, ended his opposition to Rep. Kevin McCarthy’s candidacy to be Speaker of the House of Representatives Friday afternoon. But other members of the House Freedom Caucus denied McCarthy the post on the 13th vote, though they apparently gained concessions that would give them more power and weaken the Speaker. Staff/The Baltimore Sun. 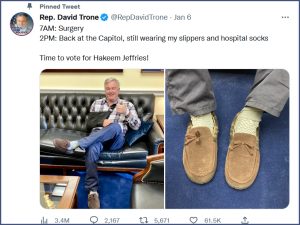 U.S. Rep. David Trone of Maryland tweeted out his return to Congress on Friday afternoon following surgery to announce his vote for Hakeem Jeffries for House speaker. His hospital socks and slippers tell a fuller story.

TRONE LEAVES HOSPITAL TO CAST 13th SPEAKER VOTE: At 7 a.m. Friday, Rep. David Trone (D-Md.) was undergoing surgery on his right shoulder. By 2 p.m., he was back on the House floor, casting a ballot for Rep. Hakeem Jefferies for speaker in the 13th round. Trone’s vote is a microcosm of the chaotic week that has transpired in Washington, D.C., as the 118th Congress attempted to convene on Tuesday but has since been unable to elect a House speaker. Steve Bohnel/Bethesda Beat.

THURGOOD MARSHALL PORTRAIT UNVEILED AT STATE SENATE OFFICE BUILDING: The omission did not escape Sen. William C. Smith Jr. (D-Montgomery). There were few portraits of Black historical figures on the walls of the Maryland Senate building in Annapolis. And yet for years Smith passed a depiction of Cecilus Calvert, who Maryland historians say was likely an enslaver. About 18 months ago, Smith launched a project that would see Calvert come down. And on Thursday, he joined Ernest Shaw Jr., an artist and teacher from West Baltimore, to unveil in its place a painting of a young Thurgood Marshall, also born in Baltimore. Ovetta Wiggins/The Washington Post.

MARYLAND 529 COLLEGE TRUST SAYS IT FIXED ERRORS: Maryland parents said this week that they hadn’t received answers as to when they’d be able to access state accounts that contain their children’s college education funds, even as tuition payments were coming due for the spring semester. But Maryland 529, the state agency that oversees the system, said Friday evening that it had resolved errors associated with the calculation formula for the Maryland Prepaid College Trust. Lia Russell/The Baltimore Sun.

DISTRICT 3 LAWMAKERS HOST TOWN HALL IN FREDERICK: Frederick-area residents spoke on a broad range of topics Saturday during the first listening session the state’s District 3 lawmakers have ever hosted for their constituents. Of the dozens of residents who attended, about 15 spoke. While they touched on all sorts of issues like the arts in Frederick, crime and voting, the most common concerns residents had centered on transportation, accessibility — particularly for minority communities — and police accountability. Clara Niel/The Frederick News Post.

WHEATON CAPITOL POLICE OFFICER HONORED FOR JAN. 6 ACTIONS: On Jan. 6, 2021, U.S. Capitol Police officer Harry Dunn was on the job as rioters attacked the Capitol. Dunn, who lives in Wheaton, was one of the officers who held back the angry crowds during the attacks. During a ceremony at the White House on Friday, President Joe Biden awarded him the Presidential Citizens Medal for his role in protecting the Capitol. Apps Bichu/Bethesda Beat

LAWSUIT ACCUSES STRONG CITY NONPROFIT OF DIVERTING FUNDS: Reginald Davis, CEO of Strong City Baltimore, resigned this week, shortly after he and his predecessor CEO, Karen D. Stokes, were accused in a lawsuit of diverting funds earmarked for community-led projects. The lawsuit is the latest blow to the once high-flying nonprofit, which sold itself in the wake of the 2015 Uprising as a trailblazing fiscal sponsor for Black-led grassroots organizations. Mark Reutter/Baltimore Brew.