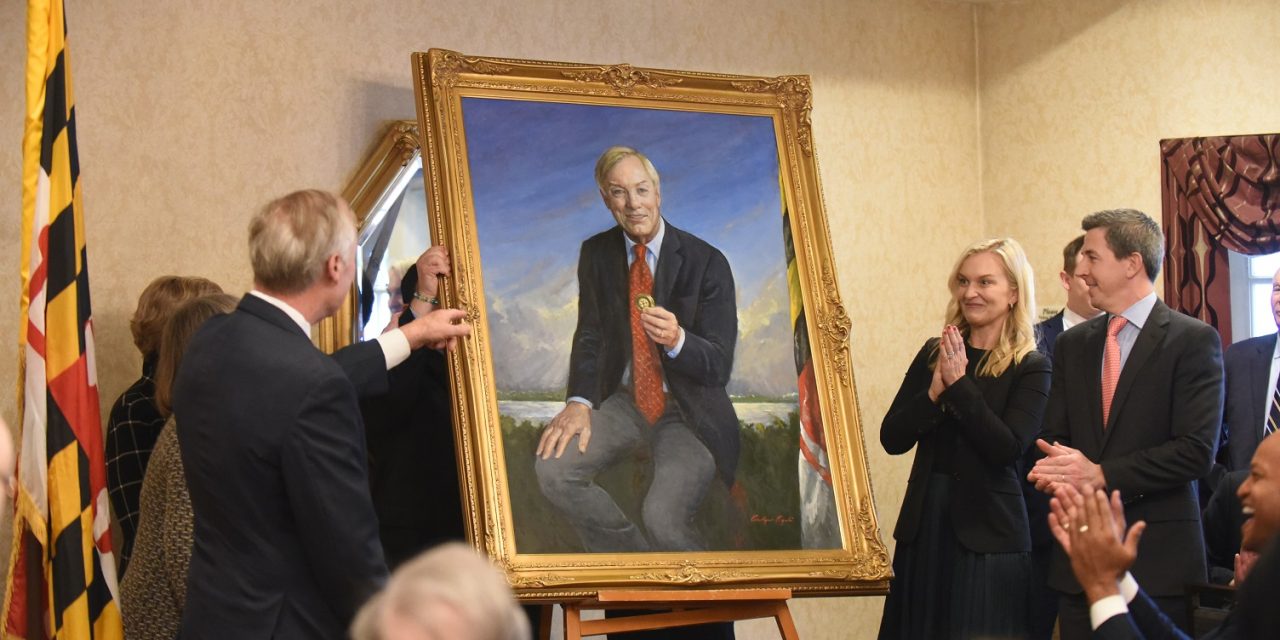 Comptroller Peter Franchot helps unveil his official portrait. In the painting, he is holding one of his signature medallions. Governor's Office Photo

NEW PORTRAIT OF FRANCHOT AS HIS TENURE COMES TO AN END: On Thursday, a cast of characters from every corner of the state came to the capital to toast the 36-year political career of outgoing Comptroller Peter Franchot (D) — and see his newly painted portrait. Hours later, the Senate Judicial Proceedings Committee unveiled a new portrait of an even more venerated Marylander, the late U.S. Supreme Court Justice Thurgood Marshall. Josh Kurtz/Maryland Matters

MONTGOMERY LAWMAKER TAKES THE LEAD AS MARYLAND GENERAL ASSEMBLY MAJORITY LEADER: Del. Marc Korman (D-Dist. 16) has been tapped to serve as majority leader in the House of Delegates, succeeding another Montgomery County lawmaker, Eric Luedtke. Luedtke has been selected by Gov.-elect Wes Moore to serve as his chief legislative officer. Steve Bohnel/Bethesda Beat

BAY GIVEN D+ GRADE: An environmental group gave the Chesapeake Bay watershed a D-plus grade in an evaluation released on Thursday — the same grade earned in its last report two years ago. Brian Witte/AP on WYPR

MOORE’S HISTORIC START AS FIRST BLACK GOVERNOR: The name Westley Watende Omari Moore has been etched into the annals of time as the first Black man in Maryland– and only the third Black man in American history– to be elected as a state governor. “I’ve been very humbled, but also just feeling very ready,” Moore told the AFRO. “It’s exciting because I think the state spoke with a collective voice. We won in urban and rural and suburban communities all throughout the state of Maryland.” Alexis Taylor/AFRO

STATE APPROVES 15-YEAR RAVENS LEASE @ M&T BANK STADIUM: The Baltimore Ravens will call M&T Bank Stadium home for at least 15 more years after signing a new lease agreement. After the Maryland Stadium Authority Board of Directors’ unanimously approved the proposed new stadium lease agreement, it was then presented to the Maryland Board of Public Works and received unanimous approval as well. Latrice Hill/Baltimore Fishbowl

REPORT: CANNABIS DEMAND IS HIGHER IN MD THAN OTHER STATES: A research project for Maryland lawmakers found that demand for cannabis in Maryland is high. While adult residents use marijuana in rates similar to other states, Marylanders who do use consume about five grams more per month on average than their counterparts, a survey of thousands of Maryland residents found. Ovetta Wiggins/Washington Post

HISTORIC CLOCK A FREDERICK PRIORITY: Restoring the Frederick city’s historic official clock in downtown Frederick is one priority city officials are hoping the county’s delegation to the General Assembly will champion when the legislature’s session begins next week. Ryan Marshall/Frederick News-Post

MARYLAND LAGGING BEHIND ON JOBS: The U.S. as a whole has not only recovered its job losses from the pandemic, but added 1 million more jobs than there were in February 2020. That is not the case for Maryland. Garrett Dvorkin/Baltimore Business Journal