Sen. Paul Pinsky has been tapped by incoming Gov. Wes Moore to head the Maryland Energy Administration, which will open up leadership positions in both Houses of the General Assembly. MarylandReporter.com photo by Glynis Kazanjian.

MOORE TAPS PINSKY FOR MEA, PROMPTING LEADERSHIP SHIFT IN GENERAL ASSEMBLY: Gov.-elect Wes Moore (D) announced Tuesday that he has selected state Sen. Paul Pinsky (D-Prince George’s) to head the Maryland Energy Administration, creating a dramatic change at that little-known state agency and a cascading set of dominoes that should shake up the leadership teams in both houses of the General Assembly. Josh Kurtz/Maryland Matters.

COURT INVALIDATES CONOWINGO DAM LICENSE: Environmental groups won a victory Tuesday in their fight for more pollution controls on Maryland’s Conowingo Dam when a federal court invalidated the dam’s 50-year license. By voiding the license, issued last year by the Federal Energy Regulatory Commission, the District of Columbia Circuit Court of Appeals is sending it back to the agency for further review. Christine Condon/The Baltimore Sun. 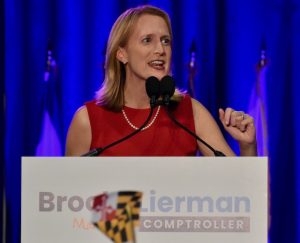 A CONVERSATION WITH THE INCOMING COMPTROLLER: When state Del. Brooke Lierman was running for the job of Maryland comptroller, she visited every county and Baltimore City; the first thing she had to do was explain to voters what a comptroller does. Traveling across the state during her campaign highlighted for Lierman how areas that seem to have little in common — such as Cambridge on the Eastern Shore, Cumberland in western Maryland and Baltimore City — actually share many challenges. Kate Ryan/WTOP-FM.

MARYLAND ER WAIT TIMES WORST IN NATION: Hospital leaders say that the long wait times in Maryland’s hospital emergency rooms are not easily fixed. They have taken steps in recent years, such as opening newer, larger facilities. They are working with nursing schools and local and state leaders to bolster the workforce through recruitment, retention and training efforts. The needs remain huge, however. One in four nursing positions in hospitals in the state remains vacant, according to the Maryland Hospital Association. Meredith Cohn/The Baltimore Banner.

PARENTS WITH COLLEGE SAVINGS PLANS CONSIDER SUING STATE: Parents who participate in Maryland’s college savings plan, frustrated by a year-long accounting problem that has left many unable to pay tuition bills on time, are considering a class-action lawsuit against the state. The parents claim that administrators of the state’s 529 Plan have effectively frozen portions of their accounts while they try to unwind an interest-calculation issue that surfaced last year. Bruce DePuyt/Maryland Matters.

NURSING HOME FIRM DONATES BIG TIME TO STATE DEMS: CommuniCare, which currently has 19 facilities in Maryland, including three in Baltimore, has been generous to politicians in Annapolis, with a total of $222,861 going to state elected officials, candidates and political parties, mostly Democrats. During his two terms in office, Republican Gov. Larry Hogan’s inaugural and campaign committees picked up $22,500 from CommuniCare. Fern Shen and Mark Reutter/Baltimore Brew.

OLSZEWSKI MAY BE EYEING REP. RUPPERSBERGER’s SEAT: Baltimore County Executive Johnny Olszewski will not pledge to complete his second four year term, which he won in a landslide election last month. Political observers have raised the possibility that Olszewski may not complete his second term, and run instead for Maryland’s 2nd district congressional seat if the Democratic incumbent, Rep. Dutch Ruppersberger chooses not to run for reelection in 2024. John Lee/WYPR-FM.