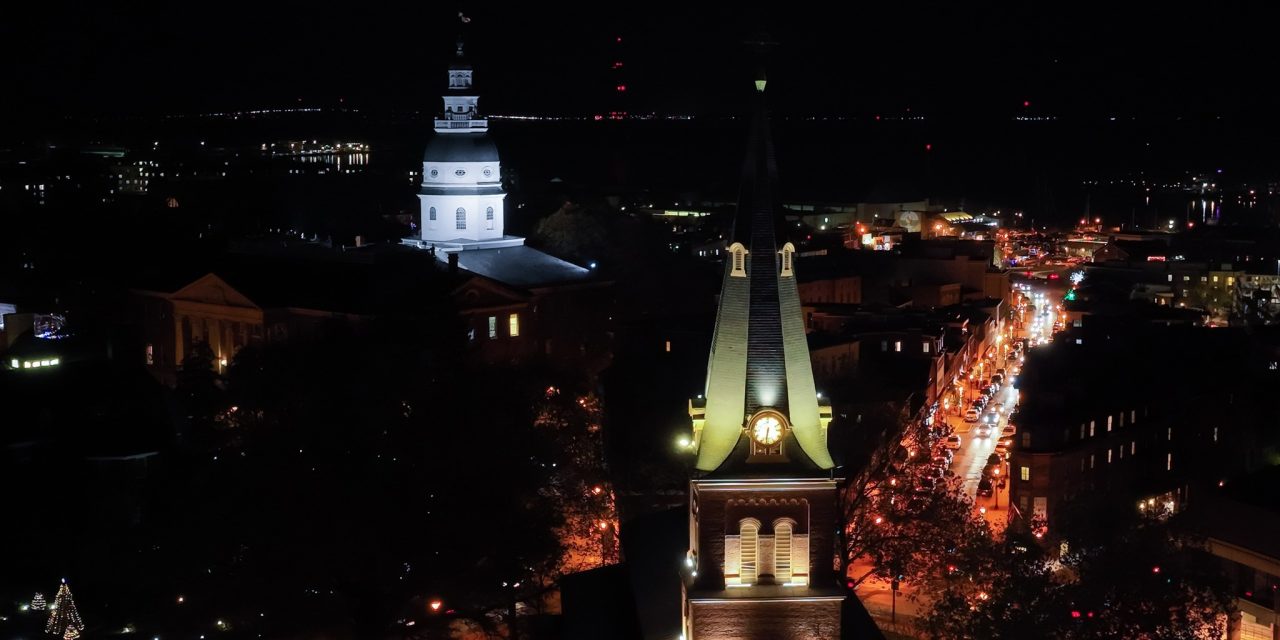 A night-time view of Annapolis looking from St. Ann's Episcopal Church in the foreground toward the State House with Main Street on the right. Copyright Mid-Atlantic Aerial photo by permission. http://www.midatlanticaerial.com/

ATTORNEYS READY TO AID PRIEST ABUSE VICTIMS SHOULD LAW CHANGE: A group of attorneys from different firms is gearing up the search for people who were sexually abused as children by Catholic priests in Maryland. They have started taking consultations with Catholic abuse victims to be ready if the Maryland General Assembly passes a law in 2023 lifting the statute of limitations on lawsuits in childhood sexual abuse cases. Lee O. Sanderlin/The Baltimore Sun.

THEY FOUGHT THE LAWN AND THE LAWN’S DONE: Unexpectedly Saturday morning on CNN’s Smerconish program was a segment plucked from the New York Times, republished in Sunday’s Sun, about a Columbia, Md. couple who fought to keep their garden of native plants rather than the grassy turf their homeowners association demanded. Their battle eventually resulted in a bill that passed the Maryland House and Senate almost unanimously and Gov. Hogan allowed to become law. CNN’s Smerconish segment is here.  Cara Buckley/The New York Times.

MTA OKs HEARINGS ON TOLL RATE PROCESS FOR I-95 EXPRESS LANES: The Maryland Transportation Authority board on Thursday approved public hearings on the toll rate setting process for the I-95 express toll lanes northbound extension. With this approval, a schedule of public hearings will be announced soon, with the hearings expected to begin in the first quarter of 2023. But the toll structure for the existing I-95 express lanes, between I-895 and just north of Route 43, is not changing as part of this process, a news release said. Staff/The Aegis.

EDUCATORS TALK BLUEPRINT, COLLABORATION: Members of the Maryland State Board of Education and Blueprint for Maryland’s Future Accountability and Implementation Board came together on Friday to discuss the state’s $3.8 billion Blueprint plan and align their visions on the comprehensive education reform plan. All the participants Friday agreed on one key focus: collaboration. William Ford/Maryland Matters.

JUST 1 OF 7 GAMBLING APPS MAKE PROFIT IN FIRST NINE DAYS: Since mobile sports betting launched in Maryland before Thanksgiving, only one of the seven gambling apps that are live made a profit in the first nine days of wagering, according to a report from the Maryland Lottery and Gaming Control. Brian Jeffries/The Annapolis Capital.

B’MORE NEIGHBORHOOD SUFFERS FLOODING TOO: There have been no anniversary celebrations to commemorate the Irvington flood, no news articles a year or five years later where residents of the Southwest Baltimore neighborhood recount where they were when the waters surged down the street in 2016 and again in 2018. In order for an event to be commemorated, it has to be recognized in the first place — and Irvington’s flooding never was. It sits in the shadow of the Ellicott City floods. But why? Rona Kobell/The Baltimore Banner.

OPINION: WHY REPUBLICANS – INCLUDING MARYLAND’s — LOST: Donald Trump-supported candidates were closed-minded on all things consensually settled, such as who won the 2020 presidential election (hint to any Republicans who remain uncertain: It was Joe Biden). They typically won primaries but lost general elections because it is possible to energize an atypical plurality of the primary electorate to get weak, insufficiently supported nominees in the general election. Richard Vatz/The Baltimore Banner.

OPINION: WHO SHOULD BE THE NEXT AG SECRETARY? Without public clues as to who the incoming Moore administration is considering to lead the Agriculture Department, all that’s available is to lay out what directions they might take and why. Here are six choices, and why, from most likely to least. Harry Huntley/Maryland Matters.

JHU UNVEILS HENRIETTA LACKS BUILDING SKETCH: Johns Hopkins University last month unveiled an architectural sketch for a new facility it plans to build and name for Henrietta Lacks, the Black cancer patient whose cells became the first in the world to replicate outside her body — considered by many a medical miracle. Jessica Calefati/The Baltimore Banner.

MO CO SCHOOL TRANSPORTATION PURCHASES VIOLATED POLICY: Approximately $133,000 worth of purchases were made in breach of policy guidelines via purchase cards issued to the assistant director of the Montgomery County school system’s Department of Transportation, according to a new report released by the Office of the Inspector General. Em Espey/Bethesda Beat.

NEW MONTGOMERY COUNCIL, NEW TENSIONS: The day after the inauguration of the new Montgomery County Council, disputes over equitable representation, transparency and who gets to control policymaking discussions had already emerged among the all Democrat council. It was inflamed by backroom disagreements about leadership that ultimately left the council’s two Black members with little structural power. Katie Shepherd/The Washington Post.

EX-CONGRESSMEN SEEK PROBE INTO LAWMAKERS ALIGNED WITH INSURRECTION: Former Maryland congressmen Robert Bauman and Wayne Gilchrist are among a group of former members of Congress who are demanding an ethics investigation into lawmakers who sought to prevent the transfer of presidential power on Jan. 6, 2021. Former Congressmembers/ Medium

GARRETT COUNTY MAN CONVICTED ON 7 INSURRECTION-RELATED CHARGES: A Western Maryland man was convicted Friday of seven charges, including assaulting police officers, during the Jan. 6, 2021, insurrection at the U.S. Capitol. Daniel Egtvedt, 59, of Oakland in Garrett County, was found guilty by U.S. District Judge Christopher R. Cooper in Washington of four felonies and three misdemeanors for his role in the attack that sought to prevent the counting of electoral votes in the 2020 presidential election. Jean Marbella/The Baltimore Sun.

ETHICS COMPLAINT FILED OVER SCOTT CAMPAIGN DONATION: The retired chief investigator for the Maryland State Prosecutor has filed a complaint with the Baltimore Board of Ethics about a campaign donation that Mayor Brandon Scott recently accepted from J.P. Grant, the Columbia businessman who funneled $170,000 to former Mayor Catherine Pugh as part of her “Healthy Holly” children’s book scheme. Fern Shen and Mark Reutter/Baltimore Brew.

POLITICAL RADIO PRODUCER JOHN PATRICK BEALE DIES AT 52: A man who died in a crash on Baltimore’s Francis Scott Key Bridge on Thursday night has been identified as John Patrick Beale Jr., 52. Known as “Jack,” he was the producer of the former politics show “Jimmy Mathis Show” on WBAL Radio, who is credited with getting Donald Trump on the show. Cassidy Jensen, Christine Condon and Jean Marbella/The Baltimore Sun.