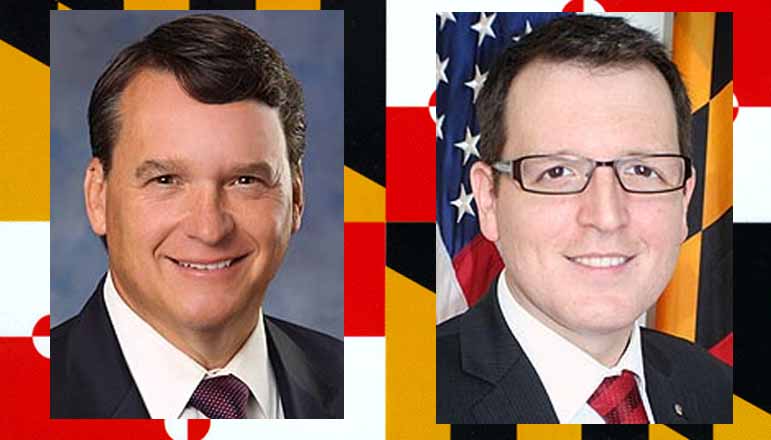 Sen. Steve Hershey, left, is the new minority leader, and Sen. Justin Ready is retaining his seat as minority whip in the state Senate after a loss of two seats in the November election.

FIRST GEN-Z MEMBERS ELECTED TO GENERAL ASSEMBLY: Joe Vogel and Jeffrie Long Jr. became the first members of Gen Z elected to the Maryland General Assembly this month. Vogel, a 25-year-old political activist, immigrated from Uruguay to Rockville as a toddler. He’s gay, Jewish and Latino, and each of those aspects of his identity shape his perspective. Long brings political experience through his work as the legislative director for then-state Del. Michael Jackson and state. Sen. Joanne Benson as well as a legislative aide for late Senate President Mike Miller. Christine Zhu/Maryland Matters.

SECRETARY BARTENFELDER CHARGED WITH ILLEGAL HUNTING: Maryland agriculture Secretary Joseph Bartenfelder was charged on Thanksgiving with illegally hunting waterfowl “with the aid of bait or on or over any baited area,” which carries a minimum $500 fine and a maximum of $1500 for a first offense. Clara Longo de Freitas/The Baltimore Banner.

ARCHDIOCESE HELPS PAY LAWYERS OF WHO SOUGHT SEALING OF ABUSE REPORT: After saying it would not oppose the release of a report detailing decades of sexual abuse in the Catholic Church in Maryland, the Archdiocese of Baltimore is helping to pay lawyers for an anonymous group that’s asked a city judge to keep secret arguments over whether to make the document public. Lee O. Sanderlin/The Baltimore Sun.

OPINION: HOWARD SCHOOL BOARD BILL A THREAT TO DEMOCRACY: Following this year’s gubernatorial election, a new measure, HC Bill 10-23, now challenges our basic conceptions of democratic rule. The bill was proposed by the chairs of the Howard County delegation, Sen. Clarence Lam and Del. Courtney Watson. It will fundamentally change our county’s all-elected school board model to include two appointed members and three elected by gerrymandered state Senate districts. Few measures have managed to unite Democratic, unaffiliated, and Republican voters, against what they deem as a power grab by local politicians to pack what is to date, a locally-elected body. Sanjay Srivastava/Maryland Matters.

$46,000 SPENT ON FREDERICK ELECTION CHALLENGE: More than 11% of the money spent since July in the race for the Frederick County Council was for a lawsuit the council president filed in the primary election to challenge her opponent’s eligibility, new campaign finance filings show. The 14 candidates in the race spent a total of $403,000 between July 4 and Nov. 15, campaign filings show. The Democrats in the race spent about as much as the Republicans, on average. Jack Hogan/The Frederick News Post.