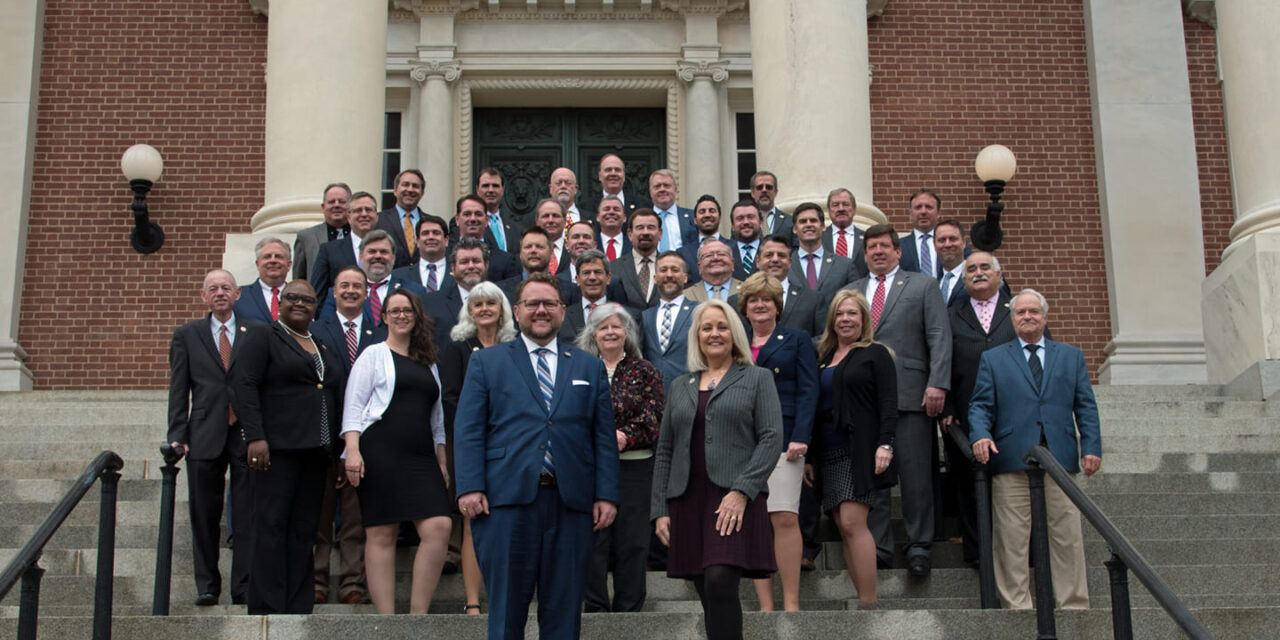 House of Delegates Republican on the steps of the State House Friday. They will choose new leaders Tuesday. From their Facebook page.

LAWMAKERS OVERTURN HOGAN VETO OF POLICE REFORM BILLS: Maryland enacted historic police accountability measures Saturday, becoming the first state to repeal its powerful Law Enforcement Officers’ Bill of Rights and setting new rules for when police may use force and how they are investigated and disciplined, Ovetta Wiggins and Erin Cox report in the Post.

ON LAST DAY OF SESSION, WRAPPING UP MAJOR ISSUES: Maryland lawmakers find themselves in an unusual position as they enter the final hours of their annual session Monday, having resolved most of the high-priority issues before them, ranging from policing reform to pandemic financial aid. Even the final major issue on the last day to-do list — setting up a sports gambling industry — appears to be resolved, coming down to just a matter of legislative formalities, Pamela Wood and Bryn Stole report for the Sun.

IMPLICIT BIAS TRAINING FOR HEALTH CARE WORKERS PASSES: A bill that would, among other things, mandate health-care workers participate in implicit bias training, is on the desk of Gov. Larry Hogan, Callan Tansill-Suddath of Capital News Service is reporting in Maryland Reporter. SB05 aims to confront racial inequality in the health-care system through legislation that targets individual care providers and the state as a whole.

PUSH TO KEEP VEHICLE EMISSIONS TESTING: In a last-minute maneuver, Maryland lawmakers are using a piece of legislation to scrutinize and possibly block a Hogan administration proposal to scale back the state’s vehicle emissions inspection program, Josh Kurtz reports for Maryland Matters.

LAWMAKERS TARGET EMERGENCY PURCHASING RULES: Maryland lawmakers are close to approving tighter rules for emergency purchases by the state government, following high-profile problems with the purchase of coronavirus tests from a South Korean company and masks and ventilators from a politically connected company, Pamela Wood of the Sun reports.

COMPROMISE ON SPORTS BETTING BILLS: House and Senate negotiators have reached agreement on a measure to determine how Maryland implements legalized sports wagering, Bruce DePuyt reports for Maryland Matters. The agreement represents a compromise between the version of HB 940 that cleared the House of Delegates a month ago and an amended version that a Senate committee crafted earlier this week.

STATE AVERAGES 1,300 NEW COVID CASES A DAY: Maryland health officials reported 1,483 new cases of the coronavirus and 11 more deaths Sunday as the state continues to average more than 1,300 daily cases over the past two weeks, Phil Davis of the Sun reports. As the state prepares to allow all Marylanders ages 16 and older to receive vaccinations through all state providers Monday, Sunday was the fifth straight day of more than 1,200 newly confirmed COVID-19 cases.

MO CO HIGHWAY BACKER DISPUTE CRITICISM: Backers of the Hogan administration’s plan to widen two Montgomery County highways sought to rebut criticism of the project from Rep. Anthony G. Brown, contained in an April 2 letter he sent to U.S. Transportation Secretary Pete Buttigieg, reports Bruce DePuyt for Maryland Matters. The Suburban Maryland Transportation Alliance told Buttigieg there are no similarities between the Montgomery project and the one in Lone Star State that has raised equity concerns.

RUSHERN BAKER ANNOUNCES RUN FOR GOV: Former Prince George’s County Executive Rushern L. Baker III said he is planning to run for governor of Maryland in 2022, joining what could be a crowded Democratic primary field after eight years of Republican rule, Rachel Chason of the Post reports.

THE CICADAS ARE COMING: Madison Hunt of Capital News Service reports, in Maryland Reporter, that Brood X, a new generation of cicadas, will begin to show up in Maryland in the next few weeks, after a 17-year-long hiatus. These periodical cicadas — cicadas that emerge every 17 years — are only found along the eastern half of the United States.

OPINION: THE SUN ALSO RISES: In a column for Maryland Matters, Frank DeFilippo gives a history of the Baltimore Sun, which is currently up for sale as part of the Tribune empire. He writes that the angel who may bail out The Sun is Stewart Bainum Jr., heir to a nursing home (Manor Care, since sold) and hotel (Choice International) fortune … “Bainum is no dilettante. He’s a former member of the General Assembly and an MBA who understands due diligence and how to pick and choose. He is said to be devoted to community journalism, and, along with his wife, Sandy, has vowed to put his money to public service.”

FORMER SUN EDITORIAL PAGE EDITOR JOSEPH R.L. STERNE DIES: Joseph R.L. Sterne, who rose through the ranks from police reporter to foreign correspondent and then served as editorial page editor of The Baltimore Sun for a quarter of a century, died April 4. The former Sparks resident was 92, writes Fred Rasmussen for the Sun.