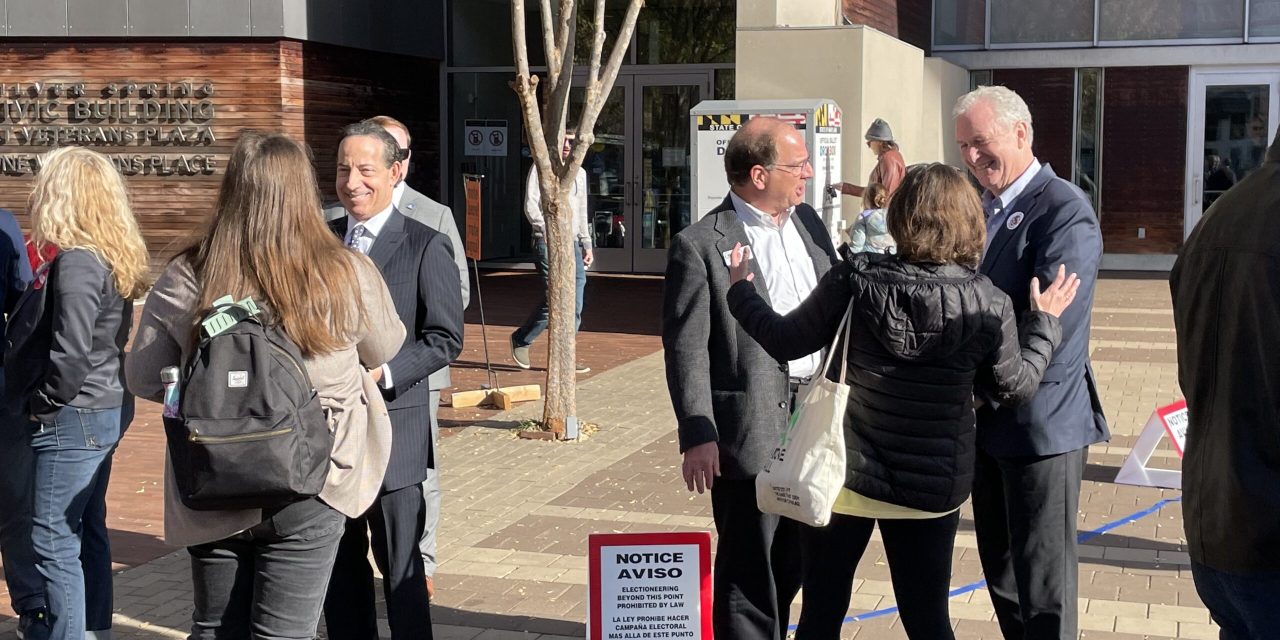 SILVER SPRING, Md.—The line of voters inside the Silver Spring Civic Building snaked around the lobby on Election Day Tuesday morning but never got long enough to spill into the brisk fall day.

The wait time, around 20 minutes, was a little longer than the several other polling places Capital News Service visited around Maryland on the last day of voting in the state.

Outside the civic building, Amanda Brown Lierman, sister-in-law to Democratic comptroller nominee Brooke Lierman, stood with her two daughters in the plaza that feeds into the building. Clad in a pink blazer and matching pants, Brown Lierman gave voters one last reminder of who they should vote for.

“I think she’s the hardest working person I know,” Brown Lierman told Capital News Service. “She’s been to every county and talked to thousands of voters.”

Shin George, a registered Independent from Silver Spring said that she was most concerned about the condition of American democracy as she entered the polls. She said she voted a straight Democratic ticket.

“I feel like voting for somebody that publicly denounces the process of democracy in this country is probably not great,” George said in reference to Dan Cox, the Republican candidate for governor who denied the validity of Joe Biden’s 2020 presidential election victory.

George, a clinical psychologist, said she was most excited about voting yes on the initiative to legalize recreational cannabis.

“There’s just a lot of a history of incarceration [with marijuana] that really negatively impacts a family and an individual that I feel is unnecessary,” George said.

Also outside the Civic Building’s plaza were Maryland Democrats Sen. Chris Van Hollen and Rep. Jamie Raskin. They stopped by to chat with a few voters and pose in a group photo with Democratic canvassers before being whisked away.

Arthur Jackson, another Silver Spring resident and a retired police captain, said he was excited to vote for Wes Moore, the Democratic nominee for governor.

“This is the first time you had the opportunity to elect a Black governor who has a chance of winning, as opposed to just being on the ballot,” Jackson said.

Jackson also said he was concerned about American democracy when he voted this morning, citing efforts by Republicans to block some votes, such as a Pennsylvania Supreme Court ruling that rejected thousands of mail-in ballots that did not include dates following a lawsuit by Republicans.

Any Maryland voter in line at the polls no later than 8 p.m., when polls close, will still be able to cast their ballot, said Nikki Charlson, deputy administrator for the Maryland State Board of Elections.

Before Election Day, 781,291 Marylanders had already cast their votes through early voting and mail-in ballots, according to the Maryland State Board of Elections.

In an online press conference Tuesday morning, Charleston said she does not have an exact time for when final election results will be in tonight, but in-person ballot counting will begin once polls close.

Marylanders can keep up to date with the results as they are counted on the board of elections site. 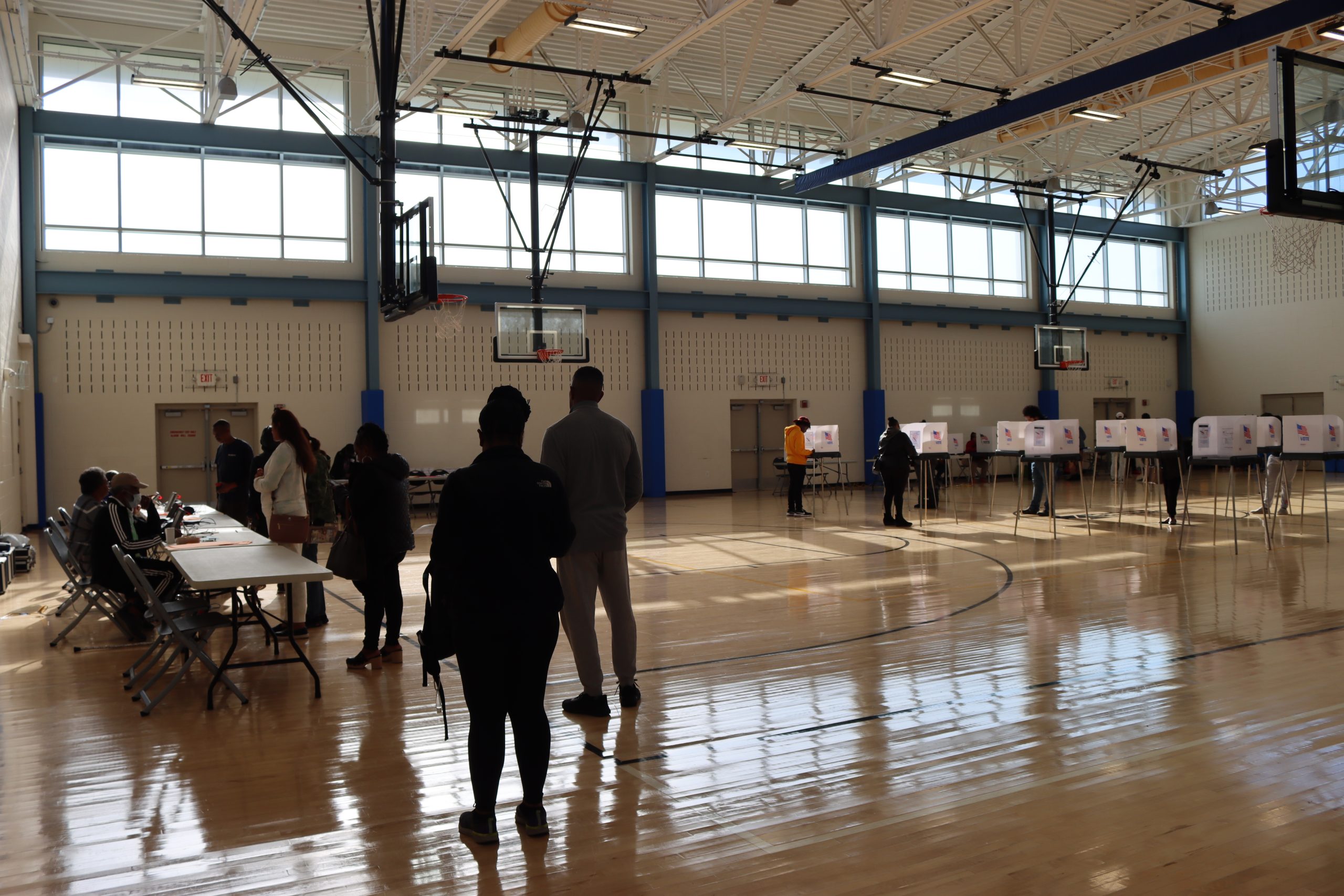 Voters stand in line at the Kentland Community Center in Hyattsville in Prince George’s County. There was a short line of voters, which included a number of students from the University of Maryland. (Abby Zimmardi/Capital News Service)

More than 399,000 mail-in ballots have been returned to the board of elections, Charlson said, making up 62% of overall ballots requested. Charlson said ballots being returned by mail must be postmarked by Nov. 8.

Same-day registration and voting is available, she said. Individuals must bring proof of residency.

In Carroll County, voters were more concerned about their votes being counted than who they voted for. Some decided to vote in-person because of concerns about early voting and mail in ballots.  They waited for nearly 20 minutes to vote at North Carroll Middle School in Hampstead, Md.

“I saw on the news back in 2020 there were ballots being found days after Election Day,” Matt Pigrome said. “I’m making sure I vote the way that’s the most secure to me.”

Pigrome, a registered Republican, declined to share who he voted for. He said voter integrity and preservation of democracy were the things on his mind.

“Is this a perfect country, nope,” he said. “But this is still the best damn country in the world, and I want my elected officials to focus on that instead of being so doom and gloom all the time.”

Some in Carroll County, expressing dissatisfaction with Democratic control of the White House and Congress, said they were ready for a big change.

“The last two years have been nothing short of disappointing, nothing but a bunch of fear mongering from Biden and his people,” said Victoria Wright as she waited in line at Liberty High School in Sykesville. “It’s time for a change.”

Wrightsaid she will supports Republican gubernatorial nominee Dan Cox despite the lack of support he has received from his party.

“What I love about Dan is that he’s going to govern the way he sees fit, no matter who’s on his side” she said.  “How can you not respect that?.”

Alisa and John Walterhoefer, registered Republicans, waited until this morning to vote. The married couple said voting today was “the safer option,” with the most important issue on the ballot being the decision on who will be the next governor of Maryland.

“I just don’t like any of the progressive ideology,” said Alisa Walterhoefer. “I want a governor that is going to stop all that. I can’t imagine a state with Wes Moore. (If he is elected), we will probably move.”

John Walterhoefer, who is self-employed and works in Baltimore City, said his work in the city has influenced his voting decisions.

“I see it everyday,” he said, the progressivism.  It’s destroying the city.”

Earlier in the morning, Hope Baptist Church had a consistent but smaller number of voters. Richard Byrd, a registered Democrat and federal employee, said he chose this specific location because of the lack of crowds.

“I knew nobody would be here,” Byrd said. “I knew I wouldn’t have to rush to get here or wait an extended amount of time.”

For Byrd, Maryland Question 4, which legalizes recreational marijuana, was a priority.

“I’m for it, because some people need it for their health and it does help them get around better in life,” he said.

“We always bring her, and as she gets older, she has a lot of questions about what’s going on,” Webb said. “I walked her through the ballot to show her what we were actually voting for.”

Webb said she voted for the complete Democratic ticket and said that although she lives in an area where she does not think results will be contested, she fears about that happening across the country.

“’I’m less concerned about who wins or loses and (more about) whether people accept the results,” she said.

Yaya Patterson, 29, said that voting in this election felt different than any past election, because this time she was voting for who she truly wanted to win.

“When I was younger, I often voted [how] older people were influencing me to vote and telling me what to do,” Patterson said. “Well, what if I just vote for who I want? And that feels good. Even if it doesn’t work out, even if all goes to (expletive deleted), then at least I can say I voted from my heart.”

At Kentland Community Center in Hyattsville, Rafael Medina, 28, said he was most concerned about the economy and economic development where he lives.

Medina, a registered Democrat, said he voted only for candidates in his party. He said he also works on immigration on his own time, and that is an issue that influenced his vote.

Dominic Sims, a junior studying business at the University of Maryland, said he does not care if a Democrat or a Republican wins; he just wants the best candidate to win.

Sims, 21, voted at the Hyattsville community center with his mother, and said he was concerned the wrong people at the local level might abuse their power.

“I live in this area, so I just want to make sure that the right people are going to do the right things to give back to the community,” he said.

A van of senior citizens pulled up to the Randallstown High School election site Tuesday morning. Many said they were ready to cast their votes and elect barrier-breaking Democratic candidates.

“A Black governor, female lieutenant [governor] and even a female comptroller,” said James Drew, a retired security guard from Randallstown, “it feels good to say my vote played a part in that.”

Although the diversity of candidates on the Democratic side of the ticket attracted some, others were more excited about the plans Wes Moore, lieutenant governor candidate Aruna Miller, comptroller candidate Brooke Lierman and Anthony Brown, running for attorney general, had for the state.

“They all seem in lockstep with each other,” said Kathrine Dillingham, a former Republican who registered as an Independent after the 2016 election. “I know they all have different roles and stuff, but they seem so united and so together.” 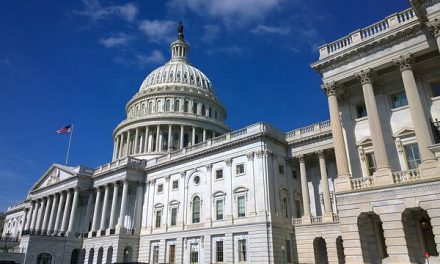 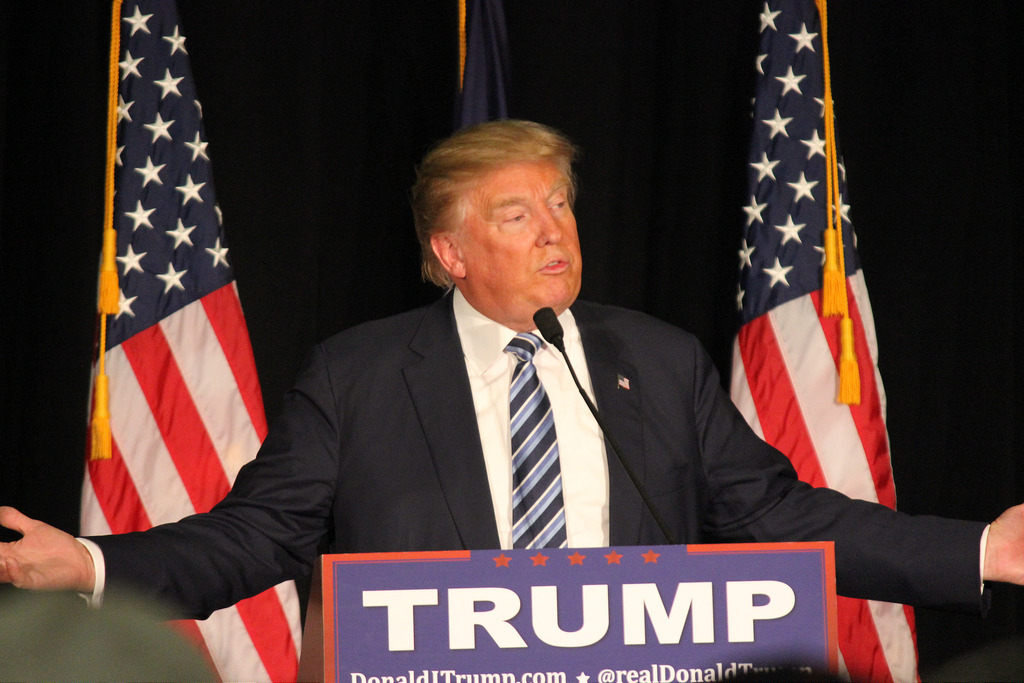 Does running as a pro-Trump Republican help or hurt in Maryland?