Jimmy Carter with his rolled-up shirtsleeves in 1976. Photo by Mitchell Weinstock with Flickr Creative Commons License

I have never been to Iowa. My 45-year career as a journalist based in Maryland has taken me to New Orleans and New York City, to Paris and Beijing, but Des Moines and Davenport – meh.

Nothing against Iowa with its 99 rectangular counties – except this mess with their irregular caucuses.

To an Iowan, Maryland’s counties must look as bizarrely shaped as our state’s gerrymandered congressional districts. But why can’t Iowans just vote like normal people?

There’s real value in seeing the candidates in person. Long ago, that used to happen in Maryland.

In August 1975, less than a month into my first full-time reporting job at the Columbia Flier, a free weekly newspaper, I was standing in the basement of a townhouse there listening to a peanut farmer from Georgia.

Jimmy Carter had just come from a private meeting at the Route 108 home of his lead Maryland supporter, Sen. Jim Clark, Howard County’s lone senator and a farmer as well. The only journalist allowed at that meeting was columnist George Will – yes, he’s been writing that long too.

I recall little about what Carter said but I got a little revelation about campaigning that day when Carter went to a more public event at Howard County’s VoTech high school. At the same point in the same speech he had given at Judy Nieman’s house shortly before, Carter took off his blue blazer, rolled up his shirtsleeves and became once again a man of the people.

In mid-1975, no one really thought this peanut farmer – also a former nuclear submariner who had gone to the Naval Academy and governor of Georgia – would become president. But a year later, I was in New York City at my first national convention, where he was nominated. Six months later I was at the Capitol seeing him sworn in.

Over the course of that year, I got to see in person all the Democratic candidates for president. I interviewed Oklahoma Sen. Fred Harris outside his camper in Patapsco State Park. “I was chairman of the Democratic Party, and there is no such thing,” said Harris.

There was a day-long candidates’ forum in early 1976 in Shriver Hall at Johns Hopkins University in Baltimore. After they spoke to the crowd, the candidates sat down with local reporters at a conference table downstairs.

Gov. Milton Shapp of Pennsylvania was running. “The guzintas [goes-intos] have to equal the guzoutas [goes-out-ofs],” he said. Revenues have to equal spending – the federal budget must be balanced. What a quaint notion, one that Sen. Clark campaigned to put in the U.S. Constitution for decades.

Heck, I walked to see Mo Udall, the Arizona congressman and one of the finer politicians of his day. He was up at the Long Reach Village Center in Columbia near my home. He told a self-deprecating joke I still recall.

Earlier that year, he walked into a barbershop in New Hampshire and said, “Hi, I’m Mo Udall and I’m running for president.” To which the barber responded,
“Yeah, we were laughing about that just the other day.” 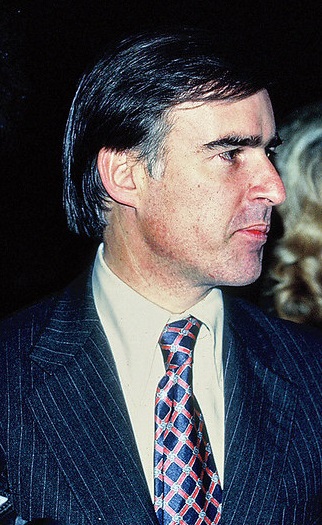 As Carter’s support mounted before the Maryland Democratic primary in May, the old-line Democratic leaders in Maryland, including Gov. Marvin Mandel, tried to derail him by backing California Gov. Jerry Brown, then just 38 in his first hitch as governor. He gave a speech at a rally in front of the Clyde’s gazebo at Lake Kittamaqundi in Columbia, site of many political events.

This nostalgia is about the long-distant time when Maryland was relevant in choosing a nominee for president, and even a young reporter from a small, free weekly tabloid had access to the candidates.

Four years ago, the best I could do was attend a fundraiser for Hillary Clinton at the University of Maryland College Park, cordoned off like the other scribes some distance away. And that year I got to the Hagerstown airport too late to get into the crowded hangar to see Donald Trump live, but the video was probably just as good.

It is good to see candidates face to face and ask them questions, as you can in Iowa, “the heartland,” as they call it. But what about the headlands on the East Coast?

I don’t know if there is a good way to choose a president. Certainly not debates where a bully like Donald Trump can humiliate candidates far more knowledgeable and qualified than him. And certainly not these caucuses in Iowa.