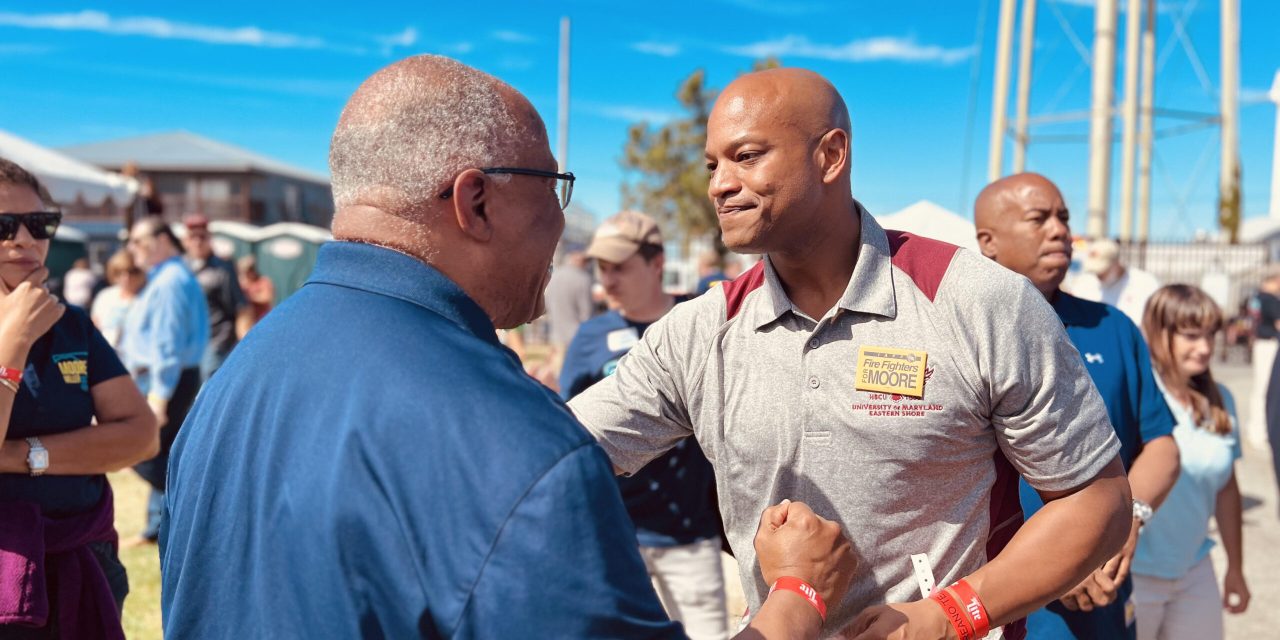 Democratic gubernatorial nominee Wes Moore shakes hands with some of the more than 5,000 visitors at the 45th annual J. Millard Tawes Crab & Clam Bake in Crisfield, Maryland. Moore was one of many politicians and candidates seeking office Nov. 8. (Courtesy of Wes Moore Campaign)

Editor’s Note: This article is republished with permission from the Baltimore Post-Examiner.

Democratic gubernatorial candidate Wes Moore said if he is elected and is forced to deal with a harsh coronavirus resurgence this upcoming winter his administration will “follow the science” and make decisions without political considerations when crafting a plan to respond to the outbreak.

More than 1.2 million cases of COVID-19 have been reported in the state and the positivity rate is above 7%, according to the Maryland Department of Health. Positivity rates of 5% or higher exceed what the CDC considers to be within the zone of effective containment.  More than 15,000 people in Maryland have died from COVID-19 since the start of the pandemic.

“We are going to spend time with doctors and practitioners and scientists. We are going to get the best intelligence and the best data that they have about what is the threat,” Moore told Baltimore Post-Examiner in an impromptu interview earlier this week during a walking tour of downtown Frederick.

“I will be working in coordination with local jurisdictions to make sure that we are being transparent as a state about the information that we are seeing and the steps that we are going to take. But the number one priority that I am going to have is keeping our people safe. That is the number one job of any chief executive,” Moore added.

Asked if he would consider shutting down schools and businesses, as Gov. Larry Hogan did on the recommendation of scientists and medical authorities at the height of the pandemic in the spring of 2020, Moore reiterated that such a decision would be based on science.

Multiple attempts to get an interview with or comment from Moore’s Republican opponent, Del. Dan Cox of Frederick County, proved unsuccessful. Cox was a no-show last week for a scheduled phone interview with the Post-Examiner. His campaign spokesperson, Allie Rodriguez, said in a text she could neither reach nor locate the candidate. Subsequent requests were made following that incident.

Cox was present at a fundraiser former President Donald Trump held for the candidate on Monday at Trump’s home/resort Mar-a-Lago in Palm Beach, Florida. Cox is a staunch supporter of the former president and has entertained conspiracy theories claiming Trump actually won the 2020 election.

On COVID-19, Cox and several other GOP state lawmakers unsuccessfully sued Hogan in 2020 over virus containment measures that the governor had put into place. Cox also launched an unsuccessful effort earlier this year to impeach Hogan for the same reason. Cox is adamantly opposed to COVID-19 vaccine mandates.

Hogan was a strong supporter of Cox’s primary opponent, former state Commerce Secretary Kelly Schulz. Moreover, Hogan has not only refused to support Cox, but has called the candidate a “QAnon whack job,” and has even gone as far as saying that he would not even give the delegate a tour of the governor’s office.

But Cox is not without his supporters and many share his views on how to address COVID-19.

“I would trust Dan Cox to deal with a resurgence because he would rely on the individual’s ability to make the choices that are best for them and the way that they feel they can best safely live their lives,” Del. Brian Chisholm, R-Anne Arundel, said.

Chisholm, who sits on the Health and Government Operations Committee, added: “I think most people would acknowledge that the [reaction from the] Democratic Party and somebody like Wes Moore is going to be to shut everything down and let the government control and dictate what happens.”

“He (Moore) wants to revert back to things that were in place when COVID was at a serious high and was very very serious at the time. I look at COVID now and we are past the point of masks, and past the point of where we were. So I trust Cox more than anybody else at the moment.”

Hogan: ‘Mass vaccination sites’ to be set up throughout Maryland

How will the end of enhanced UI benefits affect the state’s labor market?