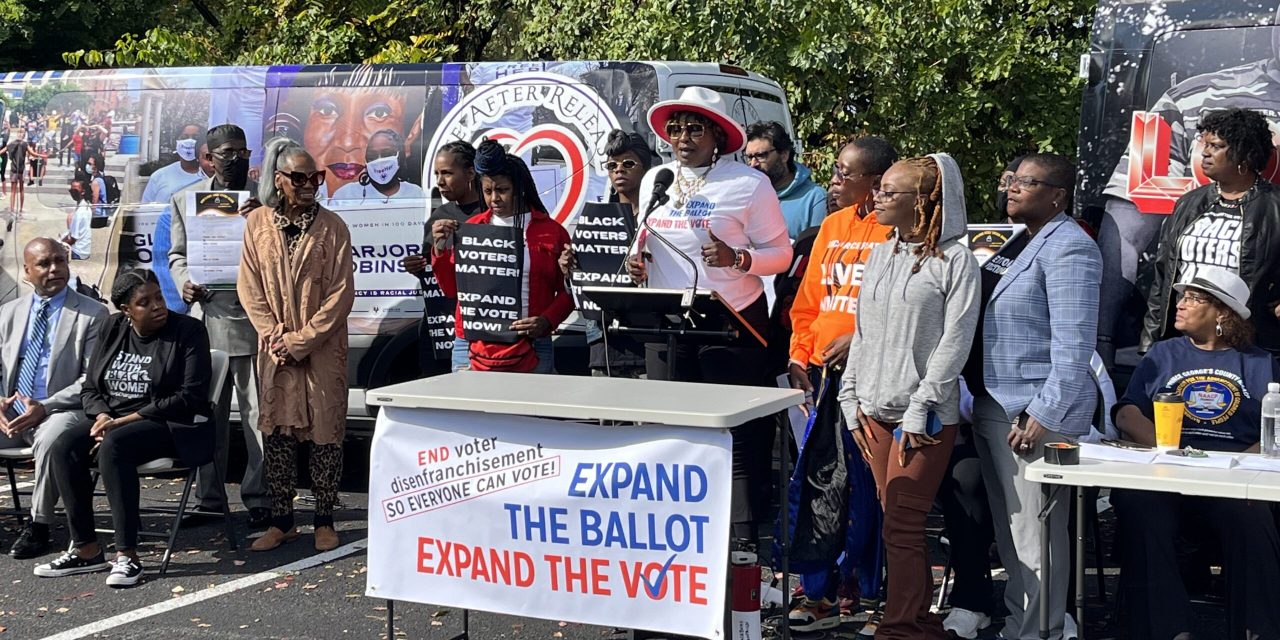 Qiana Johnson, a formerly incarcerated woman, speaks at the Expand the Ballot Coalition press conference on Tuesday. Johnson, CEO and executive director of Life After Release, works with women as they transition from incarceration and back to their communities. (Shannon Clark/Capital News Service)

LARGO, Md.  – Thousands of Maryland residents will not cast a ballot in this year’s election because they are behind bars.  They have not had their voting rights taken from them.  In fact, they have not been convicted of a crime.

“What you care about is getting home to your family.”

Johnson is the CEO and executive director of Life After Release, an organization that works on issues for previously incarcerated Maryland residents.  Her organization and other members of the Expand the Ballot Coalition are trying to focus attention on those currently and previously behind bars and their inability to exercise their right to vote.

Coalition members, which includes Freedom Fighters, PG ChangeMakers and the NAACP, spoke during a press conference outside the Prince George’s County Board of Elections on Tuesday about the need for education and advocacy surrounding voting rights for those previously incarcerated in Maryland and others currently in jail awaiting trial.

According to a study by the Department of Justice, the average time in jail before going to trial for a person who is not able to attain pretrial release is about 135 days. Consequently, they are removed from the voting process.

“We need to go into the jails, into the prisons, because we are the ones they trust,” Johnson said

Beginning in 1851, any Marylander with a felony on their record was permanently barred from voting. In 2007, the Maryland General Assembly passed the Voting Rights Restoration Act, which banned lifetime disenfranchisement and gave back voting rights to Marylanders who had completed all terms of their felony sentence.

In 2016, the General Assembly extended the act to those on parole or probation, allowing approximately 40,000 felons at the time the ability to vote again. The Expand the Ballot Coalition formed the same year to bring together voting rights organizations in Maryland, hoping to increase voter turnout at elections, Johnson said.

The problem now, say those in the coalition, is that too many residents on probation or parole are unfamiliar with their rights and the steps that have to be taken for them to vote. 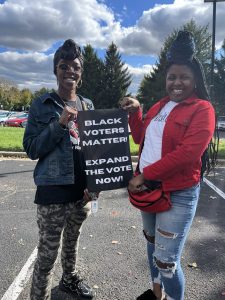 “There is a huge lack of information in regards to the rights of formerly incarcerated people being able to have the right to vote,” said Alexiss Kurtz-Hoggarg, operations director for Life After Release, and because of that, that is why you see a lack of turnout.”

“You can’t exercise a right that you don’t know you have,” Morgan said.

Of particular concern for the coalition is the disproportionate number of African Americans among the group the coalition seeks to empower.

Of the nearly 18,600 people in prison in Maryland in 2019, 71% of the prison population was Black, while Black people made up 29% of the state population, according to 2019 state imprisonment data records from a 2021 The Sentencing Project report.

Black Voters Matter, an organization focused on increasing voting in predominantly Black communities, donated vans to the coalition to use over the next three weeks. Representatives from the coalition will visit state jails and detention centers to educate incarcerated Marylanders on the importance of voting.

States to collaborate on plan to reduce Conowingo Dam pollution

William Donald Schaefer: Love him, hate him, and now we are without him 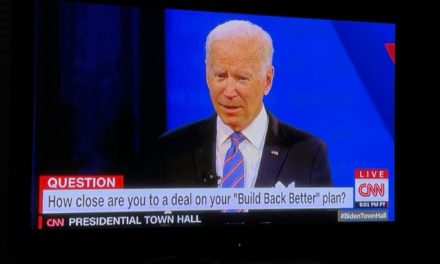