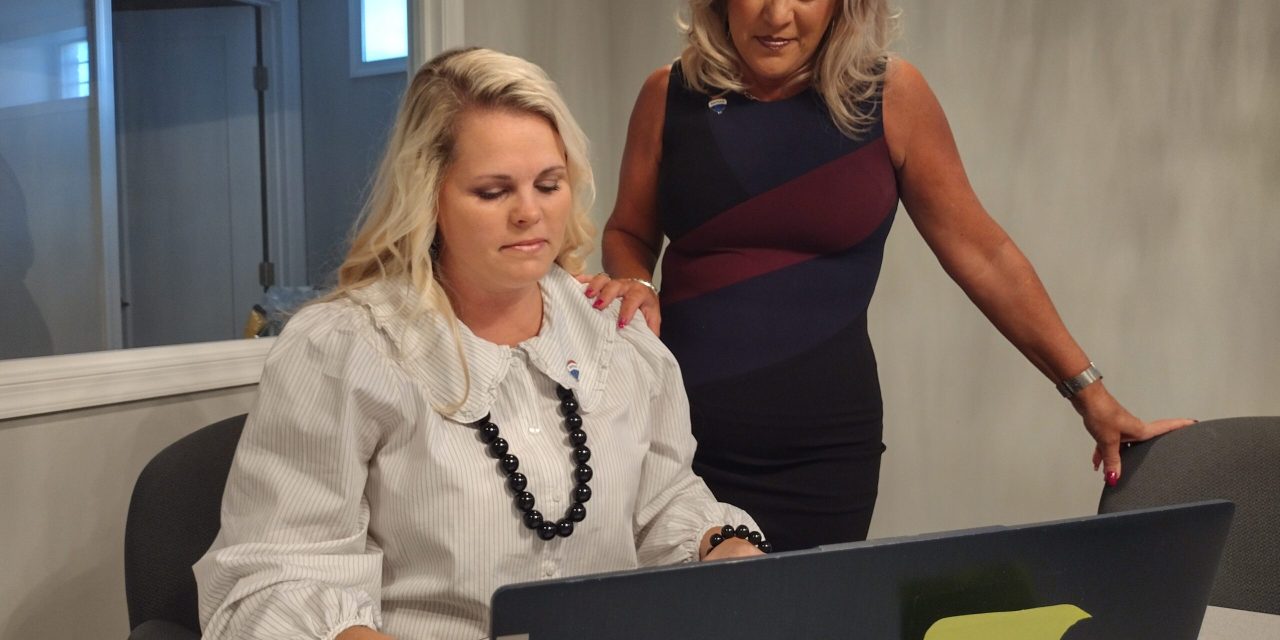 Janelle Brubach, a former Baltimore County public school teacher, now works as a Realtor for RE/MAX in Fallston. Brubach left teaching in March 2022 after 14 ½ years. “I absolutely love to teach,” she said, but I hate the job of a teacher.” (Ron Harris/Capital News Service)

ANNAPOLIS – Arianna Dastvan remembers using her birthday money as a child to buy an overhead projector for her bedroom. There, she would emulate the teachers she admired as she instructed her stuffed animals.

Dastvan recalled how she would stay late and arrive early, so she could assist her elementary school teachers with their work. She loved being in the classroom.

So, she became a teacher, but six years into her career, Dastvan, 31, quit her job with the  Baltimore County Public Schools.

“I had an emotional breakdown from being so disrespected by students and parents that one day, I was just like, ‘I’m done,’” Dastvan said. “‘I’m out.’”

Scores of Maryland public school teachers are saying the same thing, and their departures are creating shortages throughout the state’s education system.

In the last academic school year, 9.1% of Maryland teachers left the profession altogether, according to the state department of education. Consequently, at the beginning of this year, county school systems across the state reported hundreds of teacher vacancies they needed to fill.

In an effort to quickly staff classrooms and retain teachers, some school districts are raising wages.

Baltimore County Public Schools announced a pay package on Tuesday that includes a 3% “cost-of-living increase for all staff members retroactive to July 1 and retention bonuses. In May, Montgomery County Public Schools gave their staff a 6% increase in salaries, citing the raise as an effort to help attract new staff and “encourage (staff) to stay with us,” said Monifa McKnight, superintendent for MCPS.

“Teachers have long known theirs was a difficult job.. How many professions, for instance, expect their employees to pay for most of the materials they need to do their job?

Now, after two years of hybrid learning, social distancing, masked-up teaching and the associated anxiety, many Maryland teachers are burned out and are leaving, either to early retirement or in search of a new career.

The teacher exodus, according to a survey this year of 1,324 teachers, appears to be the result of “a deep disillusionment of many teachers who feel overworked, underpaid, and under-appreciated.”

The Merrimack College Teacher Survey, which was commissioned by the Winston School of Education and Social Policy at Merrimack conducted by the nonprofit EdWeek Research Center, found that in the last 11 years, the percentage of teachers who believe the community treats them with professionalism has dropped from 77% to only 46%.

Just 12% of teachers, the survey found, were “very satisfied” with their jobs. More than four in ten said they were “fairly likely” or “very likely” to leave the profession in the next two years.

Consequently, the study concluded, the flow of teachers leaving the profession have the “potential implications for a once-in-a-generation shift in the teaching profession.”

“It’s the worst it has ever been right now,” Christy told the Capital News Service. “We’re at the tipping point. It’s either make it or break it. I don’t see anything that says we are going to make it. So, it looks like it’s going to break.”

Dastvan said she was sexually assaulted by a Golden Ring student in 2019. Dastvan said she reported the assault to the school’s administration, but she did not receive the support she expected.

“‘Ms. Dastvan, what do you expect?’” she said was the gist of the response. “‘He’s just a 12-year-old boy.’ That was the final straw for me. I transferred that year.” 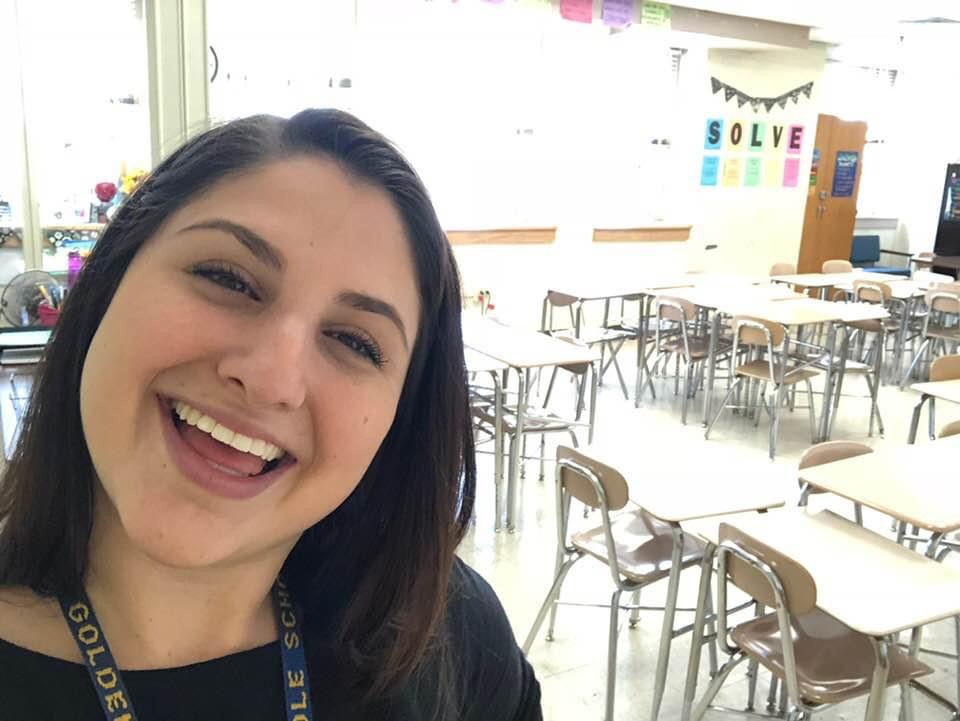 Arianna Dastvan wanted to be a teacher since she was in elementary school. But after achieving her dreams, she left the job in 2020 after six years due to the stress from the job. She now works remotely for Realestaged, a furniture staging company for real estate agencies. (Courtesy of Arianna Dastvan)

She said she transferred to General John Stricker Middle School in Dundalk.

After two months at the new school, Dastvan said she suffered a mental breakdown. She said she checked herself into Sheppard Pratt Adult Day Hospital and received outpatient care for a month and half.

Following treatment, she returned to teaching, just as the coronavirus pandemic began. Like teachers across the country, she transitioned to remote teaching. Dastvan decided to leave the profession and resigned in August 2020.

She now works remotely for Realestaged, a furniture staging company for real estate agencies. Dastvan said she loves her job now, where she can complete her work from the comfort of her home with her dog by her side.

“It’s the most important job in the world,” Coll, 62, said. “What kept me (teaching) is that you knew everyday something happened in the course of the day for you or for some or all of the children, that there was a point in the day where everything was where it needed to be.”

Coll retired early and decided to run in the upcoming election for the Montgomery School Board of Education, she said, so she could impact the decisions that affect educators.

She said one of the most difficult things affecting teachers are decisions made about the classroom by non educators who do not understand classrooms’ differing needs.

“If I'm working in a kindergarten classroom, the amount of time that I'm actually given to make sure that the children in front of me have the space and the time to progress, instead of being shoved onto the next thing, that's a challenge,” Coll said.

Brubach said she was injured while attempting to separate a school fight in November 2021. Afterwards, she said, she began to suffer anxiety attacks associated with teaching. Ultimately, she said, her doctor refused to medically release her back to the classroom.

“Every time I would go into the office, and we would talk about my return back into the classroom, I physically would break out in hives, and my neck would turn beet red at just the thought of going back,” she said.

“The workload of teachers, especially through COVID, was unbelievable, and it's just a thankless job,” Brubach said. “I was basically in charge of all the sixth grade discipline. So, kids were being sent to my room yet I'm still expected to teach.”

“There was no support from administration for the amount of discipline I was handling and then parents were another level of cussing you out, and it's all your fault. And, you know, I just cracked.

“I absolutely love to teach, but I hate the job of a teacher.”