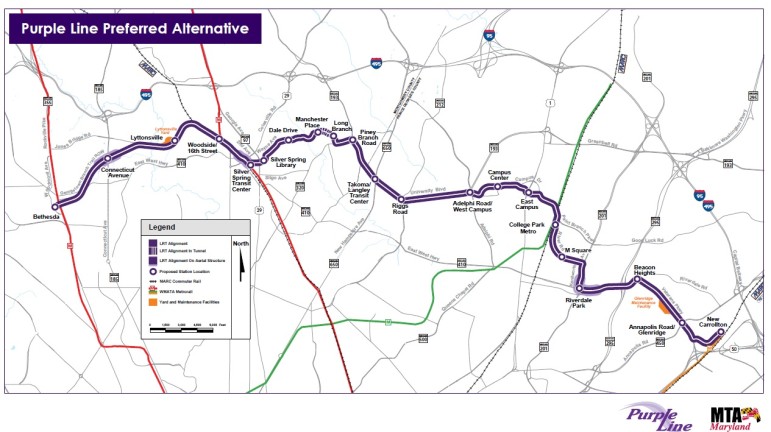 On Wednesday morning, Gregory Sanders put on a purple shirt and a purple tie, drove to Annapolis, and got a $5.6 billion present for his 36th birthday: a light rail transit system.

From a young age, his father, Harry Sanders, was a transit activist in Montgomery County who led the campaign to build the Purple Line and co-founded the Action Committee for Transit in 1986.

But when Harry Sanders died in 2010, his son wanted to see the vision through.

The Maryland Board of Public Works voted 3-0 on Wednesday to approve a $5.6 billion public-private partnership agreement for the Purple Line, a 16.2-mile, east-west light rail transit system with 21 stations between Bethesda and New Carrollton, giving Gregory Sanders “the best present he could have asked for.”

“It’s very personally meaningful,” said Gregory Sanders, vice president of advocacy group Purple Line Now. “My father started working on this in the late 1980s, and along with the love of great people, citizens, and elected officers, we’ve achieved it.”

Purple Line Transit Partners, which was chosen as the project’s contractor, offered a “competitive price and maximum value,” Gov. Larry Hogan said. The agreement achieves $550 million in savings for the state over the contract’s lifetime, he said Wednesday.

The 36-year P3 agreement – including a six-year design and construction period and a 30-year operating period – with the Maryland Department of Transportation, the Maryland Transit Administration and the Transit Partners would be performance-based.

“This will act as an economic development catalyst to connect residents with jobs,” Hogan said. “It’s another sign of our shared commitment to fiscal responsibility and sound stewardship of taxpayer dollars. It’s a giant step forward.”

The Purple Line would run through Silver Spring and College Park and would include five stops on or near the University of Maryland’s campus that would be free for students.

“People will understand why transportation is so important,” said Comptroller Peter Franchot, a long-time Montgomery County resident and Purple Line supporter, who noted that areas such as College Park will benefit greatly from the light rail system. “This will make communities more liveable. Everyone is suffering a lot of economic pain … (and) this project is a practical step to dealing with that economic pain.”

Critics of the Purple Line are skeptical of the noise and disruption construction and operation will cause. Franchot noted another potential challenge could come from enforcing riders to pay to ride the light rail, as Purple Line stations won’t have turnstiles.

“(Having fare enforcement officers) doesn’t really work,” Franchot said. “People are going to be jumping on these things left and right – and we want them to use it – but we also want them to pay.”

Purple Line Now President Ralph Bennett said the next steps are closing the contract and getting the Federal Transit Administration to certify a “full funding grant agreement,” which will lock in federal contributions of around $2 billion to the project. $990 million of federal reserves would come in the form of direct payments, while the remaining money would be Transportation Infrastructure Finance and Innovation Act loans, he said.

Ground will be broken for the Purple Line by the end of 2016, according to David Iannucci, assistant deputy chief administrative officer for economic development for Prince George’s County. He spoke at a panel event Tuesday, where community leaders discussed the future of College Park.

Maryland Secretary of Transportation Pete Rahn said at the board meeting Wednesday that service for the Purple Line should begin in 2022.

“Anybody who’s been concerned about the project is elated right now,” Bennett said. “It just feels so good.”