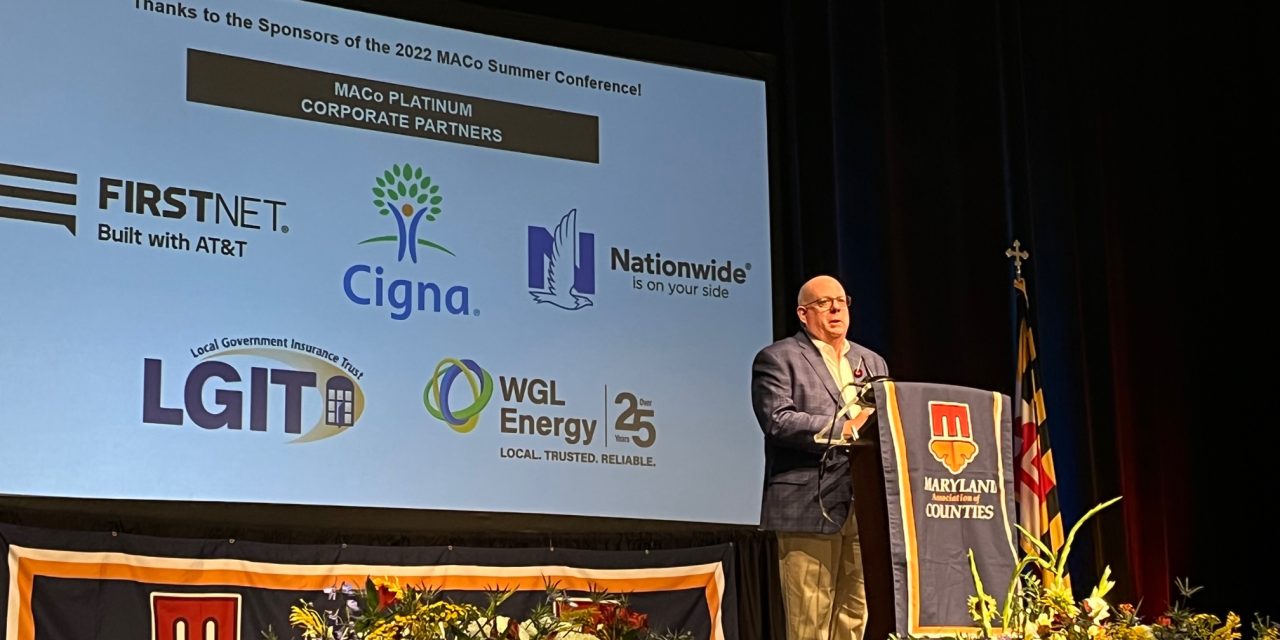 COUNTIES CLAMOR FOR TRANSPORTATION, INFRASTRUCTURE FUNDS: Gov. Larry Hogan, speaking to the annual gathering of county leaders, said $663 million in transportation aid was the culmination of a promise made eight years ago. But the underlying formula governing that aid is lower than where it was before cuts were made more than a decade ago. Bryan Sears/The Daily Record.

GOV. HOGAN TAKES HIS FINAL LAP AT MACo: At the Maryland Association of Counties conference this week, Republican Gov. Larry Hogan kicked off his farewell tour, seeking to cement his legacy as he winds down his time in office, preaching on the power of state and local partnerships to get things done. As of Thursday morning, Hogan noted that he had “153-and-a-half” days left in office. “Not that I’m counting,” he joked. Hannah Gaskill/The Baltimore Sun.

HOGAN QUESTIONS COX’s MENTAL STABILITY: Republican Gov. Larry Hogan has ratcheted up the rhetoric about GOP gubernatorial candidate Dan Cox, describing him earlier this week as mentally unstable. Hogan, who earlier called Cox a “QAnon whack job,” described the GOP nominee as “a nut” during a recent radio interview and reiterated his prediction that Cox has “no chance whatsoever” of being elected governor in November. “He’s not, in my opinion, mentally stable,” Hogan said Wednesday on WGMD radio. “He wanted to hang my friend, Mike Pence, and took three busloads of people to the Capitol.” Ovetta Wiggins and Erin Cox/The Washington Post.

DEMOLITION BEGINS FOR LEGISLATIVE SERVICES BUILDING: After 46 years, the Department of Legislative Services building on State Circle is coming down, to free up space for a new complex following state officials’ concerns about the current building’s deteriorating conditions and lack of space for the growing agency. Dan Belson/The Capital Gazette.

REPEAT HOWARD EXEC RACE NOT AS CONGENIAL AS 4 YEARS AGO: Four years after they first both ran for Howard County executive, Calvin Ball and then County Executive Allan Kittleman are facing off again for the county’s top job. The mood isn’t as congenial. Ball accuses Kittleman and his supporters of an extended “Donald Trump, Dan Cox-style political stunt” that began more than a year ago with a public records request. Kittleman and former Del. Bob Flanagan, who filed the request and a subsequent lawsuit that found Ball’s office violated public disclosure laws, say it’s a matter of transparency. Sam Janesch/The Baltimore Sun.

KEEGAN-AYER APPOINTED TO DEM BALLOT FOR RACE SHE LOST BY ONE VOTE: In what has been an extended and tumultuous primary season, Frederick County Council President M.C. Keegan-Ayer (D) is headed to a re-election fight in the November general election. Keegan-Ayer was appointed Thursday evening by the Frederick County Democratic Central Committee to the ballot vacancy in the District 3 council race after her primary opponent, Jazmin Di Cola, was disqualified by a county judge last week. Danielle Gaines/Maryland Matters.

COURT RULES JUDICIAL EMPLOYEES CAN PARTAKE IN POLITICAL ACTION: In March 2018, while weighing candidates for governor in Maryland, Lisa Guffey wanted to attend an event featuring Democrat Ben Jealous. She was told she could not. Her employer, the Administrative Office of the U.S. Courts, had two days earlier imposed new rules barring all employees from expressing political views, attending political events or engaging in political activity. This week the U.S. Court of Appeals for the D.C. Circuit deemed those restrictions unconstitutional. Rachel Weiner/The Washington Post.

B’MORE CONFEDERATE STATUES TO BE PART OF ART EXHIBIT: A large-scale exhibit, called Monuments, will open in Los Angeles in the fall of 2023 and places contemporary art created by renowned Black artists alongside decommissioned Confederate statues removed from American cities – including Baltimore — after the 2015 killing of churchgoers in Charleston, S.C., by a white supremacist and the deadly neo-Nazi rally Charlottesville, Va., in 2017. Lilly Price/The Baltimore Sun.

HOPKINS PROFS SUE OVER HOME APPRAISAL: Last summer, two married Hopkins history professors welcomed an appraiser into their Homeland home, hoping to take advantage of historically low interest rates and refinance their mortgage. They believed that their house was worth much more than the $450,000 that they paid for it in 2017. But a Maryland appraisal company put the home’s value at $472,000, and in turn a mortgage lender denied the couple a refinance loan. The Black couple then applied for another refinance loan, removed family photos and had a white male colleague — another Johns Hopkins professor — stand in for them. The second appraiser valued the house at $750,000. Now they are suing. Debra Kamin/The New York Times.

OPINION: BRING BACK THE RED LINE: A Hopkins optometrist explains why it’s time to build the Red Line and other equitable transportation options in Baltimore. Bryce St. Clair/The Baltimore Banner.

TENT CITY AT BALTIMORE CITY HALL: More than a dozen tents appeared on the lush green lawn in front of Baltimore’s city hall on Wednesday morning. Community advocates joined homeless residents as they built a tent encampment to draw attention to the plight of people without homes. By mid-morning, there were 16 red tents around the city’s war memorial and more are expected in the coming days. Bethany Raja/WYPR-FM.

LEGAL BATTLE CONTINUES OVER FUNDING BALTO SCHOOLS: A coalition of public school parents joined by civil rights organizations and a national law firm are asking a city circuit court judge to issue a summary judgment between $442 million and $705 million to address long-term state funding gaps in Baltimore City Public Schools. This is part of a 2019 lawsuit and decades old legal battle over state underfunding of Baltimore schools. Zshekinah Collier/WYPR-FM.

BA CO COPS CLAIM LEADERS COVER UP RISING CRIME: Baltimore County’s Police Union says the real story of crime in the county is not being acknowledged by county leadership. In a tweet, Thursday, they compared the numbers for certain crimes year over year. For assaults up from 5,191 to 5,857, thefts up from 5,512 to 6,167, and shootings which they claim are also up but an even more problematic data point because they say it’s information that’s not being shared. Rielle Creighton /WBFF-TV News.