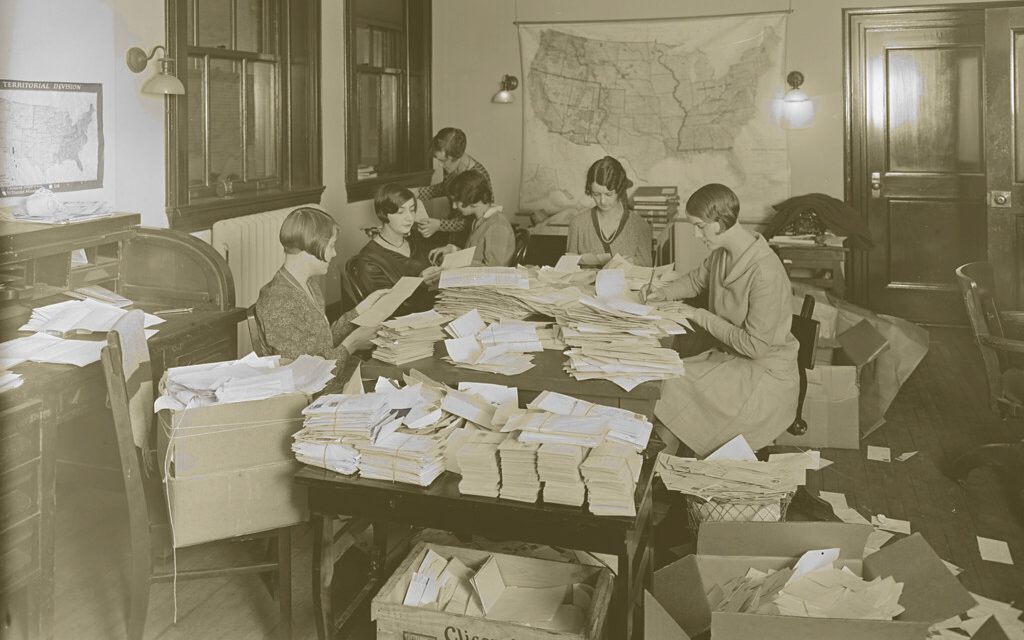 And the vote count and recount in some counties goes on ... Photo of vote counting in 1918, State Department collection.

MONTGOMERY COUNTY STILL COUNTING, FINDS UNCOUNTED BALLOTS: After nearly three weeks of tabulating ballots from the July 19 primary, Montgomery County officials are bracing for another round of counting. With incumbent County Executive Marc Elrich ahead of Potomac businessman David Blair by only 42 votes, election officials will likely be back to work recounting ballots in this tight Democratic primary. Karina Elwood/The Washington Post.

MD DEMS TOUT INFLATION REDUCTION ACT IMPACT FOR HEALTH COSTS, CLIMATE CHANGE: With the Inflation Reduction Act expected to pass in the U.S. House of Representatives on Friday, Maryland Democrats are touting the impact that the legislation, including the billions and billions of dollars of competitive funds that are up for grabs, could have on the state. Johanna Alonso/The Daily Record.

HOGAN STOPS AT IOWA FAIR FOR KEY CAUCUS LEAD-UP: Gov. Larry Hogan spent his Thursday in the Iowa Pork Producers tent at the Iowa State Fair, flipping chops with Gov. Kim Reynolds. His visit was a non-official — but required — stop for presidential candidates in the lead-up to the Iowa caucuses. Robin Opsahl/The Iowa Capital Dispatch and Maryland Matters.

WSSC UTILITY ‘IN CRISIS,’ OUTGOING LEADER CLAIMS: The outgoing leader of Maryland’s largest water utility is seeking the resignation of two members of the utility’s board, saying WSSC Water is an “organization in crisis” and that they interfered in day-to-day operations. The board members have been scrutinizing cost overruns related to a new billing system. Katherine Shaver and Ian Duncan/The Washington Post.

STADIUM AUTHORITY LACKS CAR WASH PROPERTY FOR BALLPARK LAND: The Maryland Stadium Authority is aiming to build a $70 million ballpark in Hagerstown, which will gain a professional baseball team in 2024 — but the authority is facing one last holdout, a car wash, for the land it needs. The stadium authority has already bought a laundromat, a Washington County government building, and the old Herald-Mail newspaper building and has been negotiating for months with the car wash. Hayes Gardner/The Baltimore Sun.

MO CO DEMS WANT $6B TOLL LANE PROJECT TO WAIT UNTIL NEW GOVERNOR: Montgomery County officials are hoping a delay in a final federal decision to expand portions of the Capital Beltway and Interstate 270 can be extended until a new governor takes office. Bryan Sears/The Daily Record.

BACKLOGGED GRANTS IMPACT LOCAL B’MORE ORGANIZATIONS: Baltimore City’s backlog of payments to local nonprofits for federal housing grants ballooned during the pandemic, leaving many organizations to wait between 18 months and two years to receive their promised funds. It’s a delay that advocates for Baltimore nonprofits say can hobble organizations, especially those with shoestring staffs, who rely on the federal grant funding to meet basic needs such as paying employees and providing them with health care benefits. Adam Willis/The Baltimore Banner.

MD HOSPITALS FACE INCREASING VACANCIES: One in every four hospital nursing positions are vacant in Maryland, and the shortfall is expected to get worse, without addressing it, according to a report the Maryland Hospital Association released this week. Angela Roberts/The Frederick News-Post.

B’MORE COUNTY INSPECTOR GENERAL OFFICE EXPANDING EVEN AS REVIEW OF OPERATION STEPS UP: Baltimore County’s office of inspector general, which roots out fraud, waste and abuse in county government, is about to double in size. At the same time, it is being scrutinized by a commission tasked to recommend changes to how the office operates. John Lee/WYPR-FM.

MFUME RECALLS PAPER BOY DAYS: U.S. Rep. Kweisi Mfume reflects on the AFRO’s 130th anniversary, including his own personal history delivering the newspaper to his neighbors when he was a youth. “I felt tremendous pride and power associated with the company’s logo on my canvas delivery bag even at a young age, and I still feel that same pride each time I pick up a paper or go online to read it,” he writes. Kweisi Mfume/The AFRO.