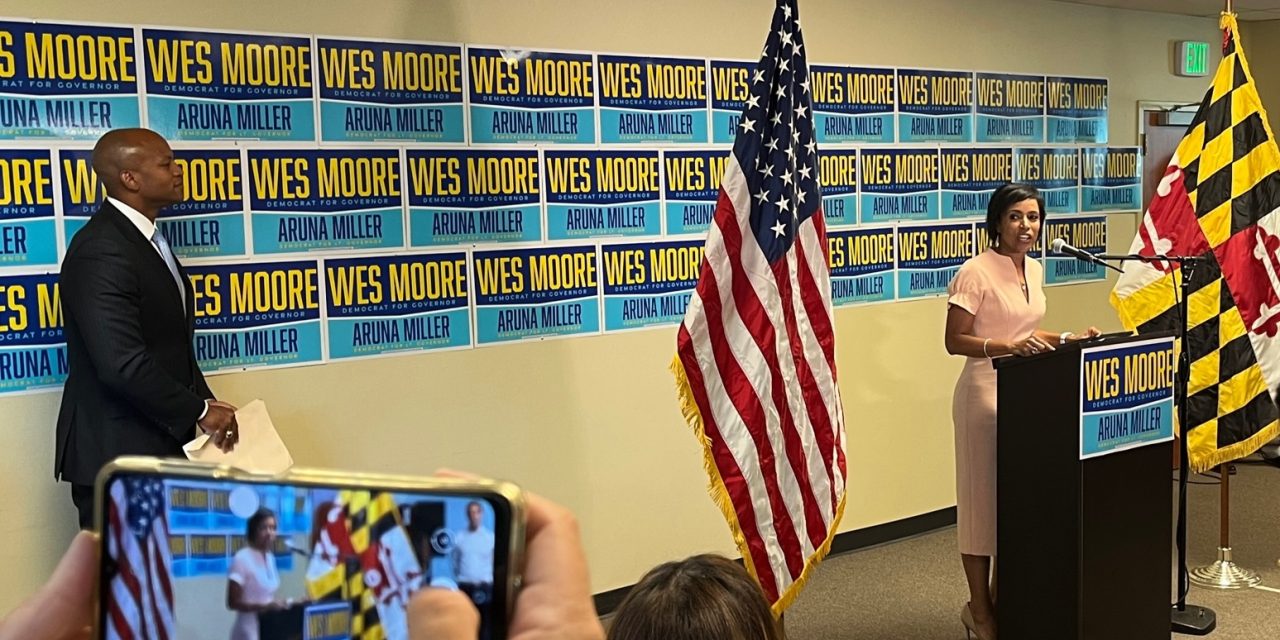 BALTIMORE SHERIFF RACE DOWN TO THE WIRE: The race for Baltimore sheriff is coming down to the wire after four days of mail-in ballot and provisional vote counting have failed to produce a clear winner. Since last week, challenger Sam Cogen has maintained a narrow lead over his former boss, John Anderson, but with about 3,800 ballots left to count, the race remains too close to call. Cogen said Thursday he feels confident, but he will wait until all votes are counted before claiming victory. Emily Opilo/Baltimore Sun

GENERAL ASSEMBLY SEAT RESULT BREAKDOWN: All 188 seats in the General Assembly also are up for grabs as elections workers count votes, with Baltimore city and county resuming Friday after a break Thursday. Here’s a district-by-district look at where things stood as of Thursday among House and Senate races in Baltimore City and County, and a peek at who’s running in November. Hannah Gaskill/Baltimore Sun

MOCO CONTINUES TO COUNT: Montgomery County election officials plan to continue counting ballots into the weekend, with thousands of mail-in and provisional ballots in the gubernatorial primary left to count before a winner can be named in the Democratic primary for county executive and other local races. Karina Elwood/Washington Post

NONBINARY CANDIDATE COULD SERVE ON CENTRAL COMMITTEE: Tia Hopkins, 33, a lifelong resident of West Baltimore, is attempting to make history as the first openly nonbinary candidate elected to the Democratic Central Committee, which is the governing body of the Maryland Democratic Party. Hopkins made a strong showing but the election results are not final yet. John-John Williams IV/Baltimore Banner

WHERE DID THE VOTES FOR MOORE, COX COME FROM? Looking at votes in the gubernatorial primaries, the Democratic nominee was successful in key areas of the state, while Republican Dan Cox did well across the board. Democratic nominee Wes Moore dominated where it mattered most. His strongest showing was in Prince George’s, a majority-Black county that makes up the largest pool of Democratic voters in the state. Representing 21% of all votes cast in the primary, it was the largest prize in the race, and Moore won it handily with 47% of the vote, while rival Tom Perez did well in Montgomery County. Sam Janesch/Baltimore Sun

COMMENTARY: ‘CITY OF BROKEN WINDOWS:’ The day after he allegedly killed a motorist at an intersection near Baltimore’s Inner Harbor, one of the city’s numberless “squeegee workers” turned 15. A week later he was arrested and charged as an adult with first-degree murder. The chief economist for the Maryland Public Policy Institute writes that in this tragic story there is much to learn about America’s ideological divide and political dysfunction, and how these forces are accelerating the decline of some of its once-great cities. Stephen J.K. Walters/City Journal

‘SQUEEGEE KID’ ALLEGATIONS, POLICY DEBATE CONTINUES:  Debate over how to address “squeegee kids” continues in Baltimore. One man says he was confronted by an armed squeegee worker Wednesday. And another story of terror with a squeegee kid accused of attacking a driver, breaking her windows, with her one-year-old child inside the car. Keith Daniels/WBFF

D.C. MAYOR ASKS FOR NATIONAL GUARD HELP AS MIGRANTS BUSSED IN: D.C. Mayor Muriel Bowser has asked federal authorities for National Guard help in handling the migrants being bused to the city from the states along the southern border with Mexico, according to a new report by WRC-TV. Matt Delaney/Washington Times

ICE DETAINEES BEING SENT OUT OF STATE AFTER NEW MD LAW: In Annapolis last year, immigrant advocacy groups hailed the passage of the Dignity Not Detention Act – a measure that would end private detention in local Maryland jails by U.S. Immigration and Customs Enforcement (ICE), with the intent of reducing ICE’s enforcement within Maryland. But many immigration attorneys say that ICE is instead transferring detainees to other facilities, and that new detainees immediately get taken out of state. The practice is further separating detainees from friends, family and quality legal counsel. Daniel Zawodny/Baltimore Brew

GROUP ASKS FEDS TO MOVE FORWARD MoCo HIGHWAY PROJECT: A group advocating for reconstruction of the aging American Legion Bridge and the addition of toll lanes along the Capital Beltway and I-270 is pushing back on critics’ questions about a new environmental review and urging the federal government to quickly green-light the project. Danielle Gaines/Maryland Matters

OCCUPATIONAL SAFETY REPORT SHEDS LIGHT ON FIREFIGHTER DEATHS FROM VACANT HOUSE COLLAPSE: A recent safety inspection report from the Maryland Occupational Safety and Health division, which investigates workplace injuries and deaths, offers new information about the minutes leading up to a vacant house collapse Jan. 24 that killed three firefighters, and a desperate effort by firefighters to dig their friends out of the rubble by hand. Lilly Price/Baltimore Sun

COMMENTARY: MD ‘LABORATORY OF CHANGE’ FOR NEW POLITICAL CENTER: Maryland should be moving toward a New Center. Our politics is extremely polarized, and we need a politics which respects the 30% to 50% of the country which does not align with pure versions of either the Republican or Democratic Party or extremist right-wing and left-wing perspectives. Dave Anderson/Maryland Matters

MDERS TO ADVISE WHITE HOUSE ON HISTORICALLY BLACK COLLEGES: Two Marylanders are new members of a national board advising the White House on ways to support America’s historically Black colleges and universities. Monica Goldson, CEO of Prince George’s County Public Schools, and Paige Blake, a rising senior at Bowie State University, were appointed to the President’s Board of Advisors on Historically Black Colleges and Universities by President Joe Biden in March. Nene Narh-Mensah/Maryland Matters