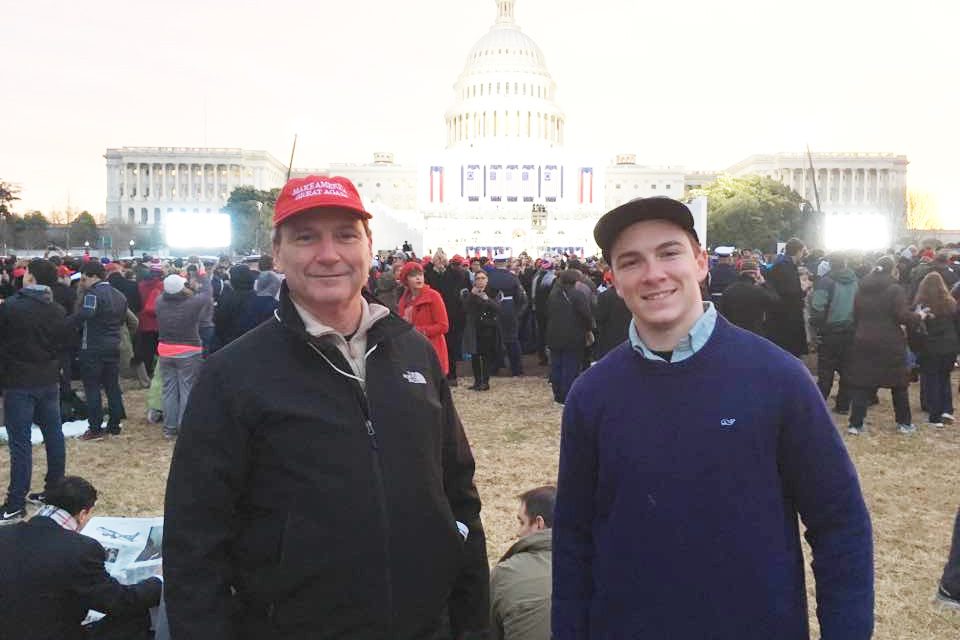 Del. Rick Impallaria, left, at the inauguration of President Trump in 2017.

DEL. IMPALLARIA CHARGED WITH THEFT OF STATE FUNDS: Del. Richard Impallaria, a Republican who has represented parts of Harford and Baltimore counties, has been charged with multiple criminal counts related to inappropriate use of state funds for a district office and office furniture, prosecutors announced Wednesday. Pamela Wood/The Baltimore Banner.

HOGAN CLEAVES TO MODERATE CONSERVATISM: There’s a hunger, Gov. Larry Hogan insists, for a brand of conservatism that doesn’t hew to the extremes of the Republican Party and isn’t tied to twice-impeached former President Donald Trump. But this summer’s primary election made clear that Maryland Republicans favor right-wing candidates like gubernatorial nominee Dan Cox, a 2020 election conspiracy theorist who was endorsed by Trump. Pamela Wood/The Baltimore Sun.

OPINION: HOGAN FAILED TO BUILD STRONG GOP: Outgoing Gov. Larry Hogan, who once was considered to be the savior of the local Grand Old Party, is now losing his mind on national television after the decisive win by Del. Don Cox to be the state’s Republican nominee for governor. Mr. Hogan constantly proclaims that Mr. Cox is unelectable. We will see in November. What is getting lost in the conversation is the failure of Gov. Hogan over the past eight years to lead and build the Maryland Republican Party into a legitimate player. Jimmy Mathis/The Baltimore Sun.

STATE DELEGATION UPDATED ON BAY CLEANUP: With a 2025 deadline looming for states to meet aggressive federal goals for cleaning up the Chesapeake Bay, members of Maryland’s congressional delegation met Wednesday on Capitol Hill with two women who will be integral parts of the public-private strategy for eradicating pollution in the nation’s largest estuary. Josh Kurtz/Maryland Matters.

FRANCHOT CALLS FOR LESS PARTISAN POLITICS: Comptroller Peter Franchot called for less partisan politics on Wednesday at his first meeting of the Board of Public Works following his lost bid to be Maryland’s next governor. Hannah Gaskill/The Baltimore Sun.

BLAIR’s LEAD OVER ELRICH GROWS TO 145 VOTES: Potomac businessman David Blair’s lead grew from 134 votes to 145 votes over incumbent Marc Elrich of Takoma Park in the Democratic primary for Montgomery County executive after the fifth day of tallying mail-in ballots, according to the results posted Wednesday night by the State Board of Elections. Christine Zhu, Julie Rasicot, Dan Schere and Anne Tallent/Bethesda Beat.

ARE VOTERS TURNING AGAINST PROGRESSIVE POLICIES? The fallout from last week’s Democratic primary could be an indictment on progressive candidates and their policies, according to some analysts. Baltimore City State’s Attorney Marilyn Mosby, who had been under fire for her progressive prosecution policies, primarily her decision not to prosecute so-called low-level crimes. finished last in her re-election bid. “People are like, ‘I may be progressive but I don’t want that progressivism,'” Political Scientist John Dedie said. Jeff Abell/WBFF-TV News.

NONBINARY CANDIDATE GENERATES DISCUSSIONS: Tia Hopkins’ campaign for the Democratic Central Committee has been called historic and inspiring, but the nonbinary candidate’s bid in District 40 has generated deep discussions about gender roles and equity in electoral politics. Hopkins, 33, a lifelong resident of West Baltimore, is attempting to make history as the first openly nonbinary candidate elected to the committee, which is the governing body of the Maryland Democratic Party. John-John Williams/The Baltimore Banner.