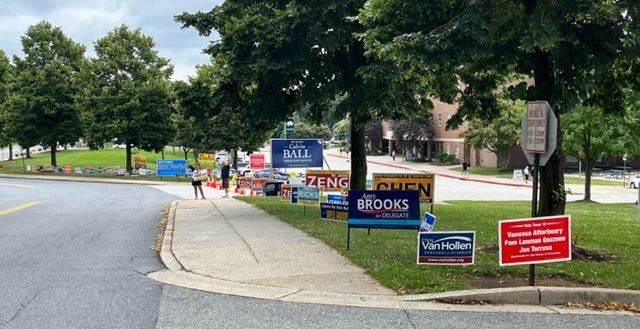 There were scores more signs than voters midday Thursday at Wilde Lake High School in Columbia. That's Judge Stephanie Porter in the distance waving at passersby as she seeks to retain her seat on the circuit court. Maryland Reporter photo by Len Lazarick

EARLY VOTING BEGINS WITH QUIET TRICKLE OF VOTERS: Early voters trickled into Maryland polling places Thursday for the first of seven days of early voting in this year’s primary election, with some speculating that voters are now choosing to use mail in ballots instead of showing up at the polls. Sam Janesch and Hannah Gaskill/Baltimore Sun

DEATH INVOLVING SQUEEGEE WORKER CAME AFTER STATE SEN COMPLAINED: At the same intersection and earlier the same day where a squeegee worker allegedly shot a man who had gotten out of his car with a bat, State Sen. Antonio Hayes had also encountered a squeegee worker and filed a police report, a source told the Banner. Cadence Quaranta, Justin Fenton and Dylan Segelbaum/Baltimore Banner

REPUBLICAN GOVERNOR RACE POLLS SHOW CLOSE RACE, PROXY FOR HOGAN VS TRUMP: The close Republican gubernatorial campaign is about more than just the nomination, it is also a proxy battle between Hogan and Trump, who has endorsed Dan Cox. Hogan, backing Kelly Schulz, is seen as a potential rival for Trump in the 2024 for their party’s nomination for president. Bryan Sears/The Daily Record

REACTING TO ROE VS WADE DECISION: Sen. Chris Van Hollen said he believes that the Supreme Court decision to overturn Roe v. Wade will lead to the “mobilization of voters across the country” who support abortion rights. Former Republican National Committee Chair Michael Steele said its impact will vary based on the local politics of the different states. Bryan Renbaum/Baltimore Post-Examiner in Maryland Reporter

CHEVY CHASE NEIGHBORS OF KAVANAUGH COMPLAIN OF ONGOING PROTESTS: Angst among the neighbors of Supreme Court Justice Brett Kavanaugh is growing as weekly protests continue at his Chevy Chase home in the wake of last month’s overturning of Roe v. Wade.  The neighbors say they are worried about the noise, the obscenities being shouted by some protesters and the disruption to the community and young children living there. Dan Schere/Bethesda Beat

BAKER REMAINS ON THE BALLOT, HESITATES TO ENDORSE: When Democratic voters cast their ballots this summer, they’ll see Rushern L. Baker III’s name on the list of candidates for governor even though he’s no longer campaigning or trying to win votes. That’s because if he were to withdraw he would be responsible for paying back $850,000 in public financing, even though he said he stopped campaigning because he saw little chance of winning the crowded Democratic primary. Pamela Wood/Baltimore Banner

CONGRESSIONAL CANDIDATES MEET: Congressional candidates Heather Mizeur and David Harden answered questions from a moderator and the audience at Chesapeake College this week about where they stand on issues prior to the July 19 primary election. The event was put on by the League of Women Voters. Christina Aufderheide/Cecil Whig

BANNER EXAMINES AG RACE: Each Democratic candidate for attorney general argues that their type of experience — Brown as a legislator and executive, and O’Malley as a prosecutor and judge — make them better qualified for the role, the chief legal officer of Maryland. Dylan Segelbaum/Baltimore Banner