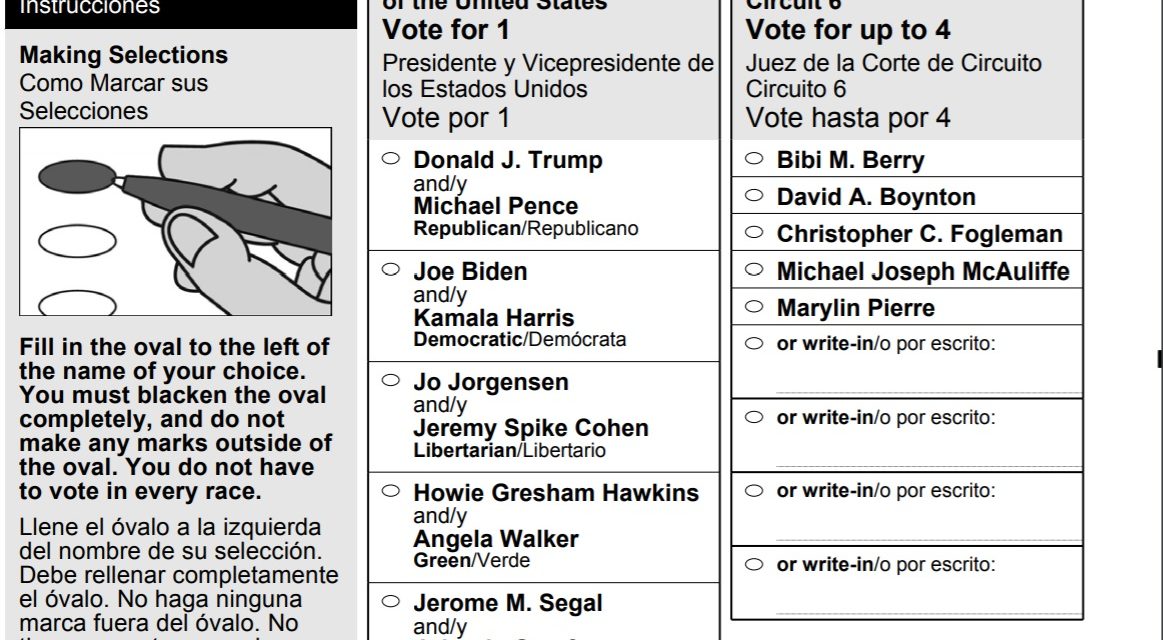 The top of a Montgomery County ballot.

WEB BALLOTS MUST BE HAND COPIED TO BE COUNTED: The rush to vote from home this year left Maryland election judges with a burden that plagues no other state in the country: ballots delivered online cannot be read by the state’s scanning machines, reports Erin Cox of the Post. To be counted, each of those ballots must instead be hand-copied by election judges onto a cardstock ballot. The number thus far is 108,000.

HOUGH: LAWSUITS AGAINST POLICE COULD BANKRUPT TOWNS: Bryan Renbaum of Maryland Reporter writes that Sen. Mike Hough (R-Carroll and Frederick) told the Senate Judicial Proceedings Committee Wednesday that Democratic-sponsored legislation that increases the amount of money local governments are forced to pay in police brutality lawsuits will bankrupt many of the state’s small towns.

EX-HARFORD EXEC HAS DEMENTIA, SEEKS MORE FUNDING FOR RESEARCH: Former Harford County Executive David Craig announced in the Sun that he has dementia, writing, “A form of it has taken both of my parents and my brother. In many ways, it took them twice — first their spirit, and then their physical presence. Over the past year, my family and I have come to the realization that a form of this affliction has now turned its gaze to me.”

ADVOCATES SAY ABORTION RIGHTS SAFE IN MARYLAND: As advocates fret over the future of access to abortion in the U.S. following the death of Supreme Court Justice Ruth Bader Ginsburg, they believe abortion rights are well-protected in Maryland — despite a lack of success for recent efforts to include them in the state’s constitution, Pamela Wood reports for the Sun. “We’re solid as a state when it comes to abortion access,” said Diana Philip, executive director of NARAL Pro-Choice Maryland.

LAWMAKERS HEAR TESTIMONY AS UTILITY CUTOFFS LOOM: With the end of the state’s moratorium on utility service cutoffs looming, Maryland lawmakers on Wednesday heard from regulators, energy assistance agencies, consumer advocates and the utilities themselves on what they’re planning to do to aid struggling ratepayers, Josh Kurtz of Maryland Matters writes.

PURPLE LINE DELAYED; MDOT SEEKS MANAGEMENT FIX: Maryland transportation officials said Tuesday they will take over day-to-day management of building the Purple Line, at least temporarily, as soon as construction crews pack up and depart, a process that could come as early as next week, writes Bruce DePuyt of Maryland Matters.

HOGAN ASKED TO STOP MDOT BUDGET CUTS: The Central Maryland Transportation Alliance is calling on Gov. Larry Hogan to cancel MDOT MTA proposed budget cuts, saying “we should not be balancing the state transportation budget on the backs of brown and black essential workers.” Earlier this month, MTA announced it would cut its fiscal year 2021 operating budget by $43 million, Ray Strickland reports for WMAR-TV.

COURTS GET CREATIVE TO RESTART ON OCT. 5: Maryland’s circuit courts will be ready to resume jury trials Oct. 5 in a socially distanced world by taking creative steps, such as converting firehouses to jury rooms, conducting jury selection via Zoom and having jurors sit and deliberate in courtroom spectator galleries, Steve Lash reports for the Daily Record.

HOGAN AGAINST RUSHING RGB REPLACEMENT: Gov. Larry Hogan is speaking out against Republican efforts to push through a Supreme Court Justice nominee to replace Justice Ruth Bader Ginsburg less than two months before the general election. In an interview at the Texas Tribune Festival, Hogan said it would be a mistake for members of his party to push through a Supreme Court nominee before Election Day, WJZ-TV reports.

THE PRESIDENTIAL DEBATES: ASK THEM THIS: As the first debate between President Trump and former VP Joe Biden nears, Towson professor Richard Vatz, in a column for MarylandReporter, gives a history of debates between presidential candidates and offers some suggestions for questions that could be asked of the two current candidates.