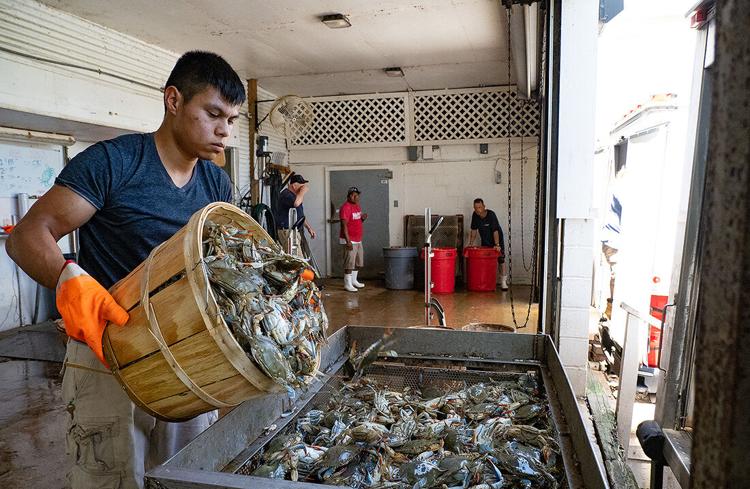 By Jeremy Cox and Timothy Wheeler

Chesapeake Bay crabbers will have reduced harvest allowances for the rest of this year under limits adopted this week in response to a worrisome drop in the Bay’s population of the popular crustaceans.

In Maryland, tighter restrictions on both commercial and recreational crabbing take effect July 1, with watermen facing first-ever limits on the number of male crabs they can harvest in August and September. The Department of Natural Resources also reduced the allowable commercial harvest of female crabs by up to 29%, depending on the month and type of crabbing gear used, through the end of the season on Nov. 30.

Recreational crabbers also will be cut back to only one bushel per day by boat, down from two bushels daily.

The Virginia Marine Resources Commission unanimously agreed June 28 to impose new restrictions on commercial harvests from Oct. 1 to the end of the season on Nov. 30. Those reduced limits will carry over for six weeks into the start of the 2023 season, four weeks longer than originally planned.

With the Chesapeake Bay crab population at its lowest ebb in 30 years of monitoring, fishery managers warned that more restrictions affecting a broader swath of crab harvesters are sure to come.

“We’re just starting this process,” said Pat Geer, the commission’s chief of fisheries management. “We are going to be looking at a lot of different things over the next few months.”

The annual winter dredge survey of the Bay’s blue crab population, released in May, found the smallest abundance of blue crabs in its history, which dates back to 1990. Researchers reported an estimated 227 million crabs in the Bay. The previous low was 270 million crabs in 2004.

Dramatic year-to-year swings in crab abundance are common, but scientists say the recent downturn is especially troubling. While the survey’s estimate for female crabs remained within the range believed sufficient to sustain the population, reproduction has been subpar for three years running. The estimate of juvenile crabs hit an all-time low in 2021 and improved only slightly this year to the second lowest abundance.

Scientists say they don’t know exactly why the crabs have failed to sufficiently reproduce in recent years. The species doesn’t appear to be overfished, according to harvest data showing that the catch is well below the maximum threshold established a decade ago for adult females. The Baywide harvest in 2021 was 36.3 million pounds, well below the long-term average of 60 million pounds.

Fisheries managers in both states have warned since the survey’s release that harvest restrictions were likely.

Virginia’s commission opted to impose daily bushel limits this fall that are typically only in effect for a couple weeks at the beginning of the season in the spring. The cutbacks range from 20% to 42% for crab potters, depending on the number of pots they’re licensed to deploy. And in 2023, the “low-bushel” period will run from March 17 until May 15, instead of ending on March 31, as in previous years.

The new restrictions are among the limited options fishery managers say they can take now to protect the Bay’s blue crab population, but others may come after an expected meeting of scientists in September to examine the reasons for the population decline.

“These are things we can do to give a little shot in the arm to curtail the things that are going on,” Geer said. Further actions in Virginia waters, he added, may include requiring tags on crab pots and new limits on soft-shell (“peeler”) crabs and on recreational crabbing.

The Potomac River Fisheries Commission, a bi-state panel that regulates fishing in that Bay tributary separating Maryland and Virginia, is considering taking action later this summer.

The Chesapeake Bay Foundation issued a statement saying it was encouraged by the announced restrictions. Allison Colden, the foundation’s Maryland senior fisheries scientist, called them “modest changes” and said they will “help ensure harvest rates do not exceed levels that could threaten the crab population.” But more is needed, she added.

“We must also address the many factors threatening Chesapeake blue crabs,” Colden said, “including poor water quality, loss of key habitat such as underwater grasses, and the proliferation of blue catfish and other invasive predators.”

Colden and Geer both said that with the Bay’s crab population at an all-time low, they believe it’s time for a new stock assessment to help guide fishery managers on next steps.