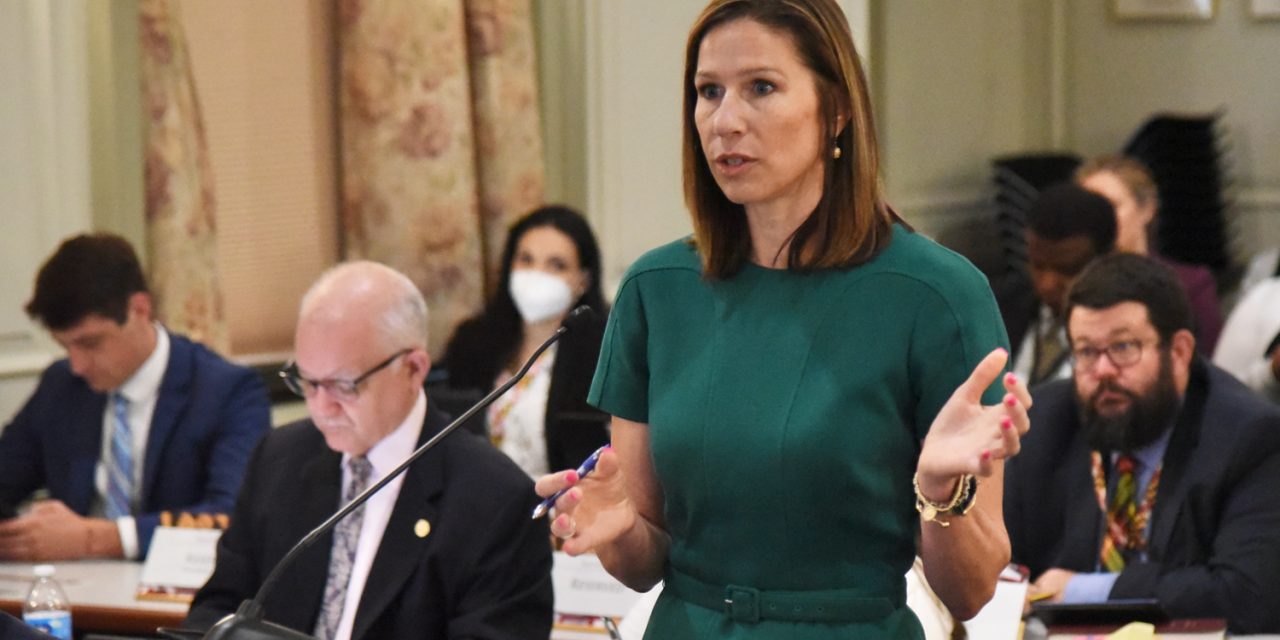 Labor Secretary Tiffany Robinson speaks to the Board of Public Works Wednesday about how her office is clearing a backlog of unemployment claims and what remains to be done. Governor's Office photo by Patrick Siebert.

LABOR SECRETARY: BACKLOG OF LEGIT JOBLESS CLAIMS CLEARED: Maryland’s labor secretary said her agency has all but cleared a backlog of “legitimate and honest” unemployment insurance claims but still faces a fraud tsunami. Speaking to the three-member Board of Public Works on Wednesday, Labor Secretary Tiffany Robinson said her agency continues to dig out from “a perfect storm” caused by the COVID-19 pandemic over two years ago. Bryan Sears/The Daily Record.

GOV HOPEFULS FOCUS ON EDUCATION, PANDEMIC, GUN VIOLENCE: Several Democratic and Republican candidates for governor discussed their visions for the state during a forum Wednesday that covered issues ranging from education and gun violence to crime, abortion rights and the proposed widening of I-270. Louis Peck/Bethesda Beat.

VAN HOLLEN BACK AT WORK, FEELING BETTER ‘BY THE DAY:’ Sen. Chris Van Hollen (D-Md.) was about two minutes into a speech in Western Maryland when his neck began throbbing. He felt lightheaded. His ears started popping like he was on an airplane. So asked himself: Should he tell the audience he wasn’t feeling well and walk off the stage? Or stick it out? “So I powered through,” Van Hollen said in his office Tuesday, his first interview since he suffered a stroke last month at the Western Maryland Democratic Summit. Meagan Flynn/The Washington Post.

HOGAN HITS THE ICE CREAM TRAIL: Gov. Larry Hogan got the scoop on the first dairy farm in Maryland to process its own milk on site, kicking off the Ice Cream Trail near Middletown on Wednesday. South Mountain Creamery welcomed the governor and Maryland Secretary of Agriculture Joseph Bartenfelder to its little slice of Frederick County with a helping of ice cream. Mary Grace Keller/The Frederick News Post.

PASTOR ANNOUNCES RUN FOR DELEGATE DISTRICT 27B: As a Calvert County resident now residing in the Prince George’s County border town of Brandywine, Jeffrie E. Long Jr. pledges to make sure residents of District 27B get an adequate portion of resources from the state when the Maryland General Assembly is in session. The 25-year-old pastor announced his intention to run for the House of Delegates seat currently held by Del. Rachel Jones (D-Calvert, Prince George’s). The incumbent, Long and fellow Democrat June Jones have hopes of winning the July 19 primary. There are no Republicans seeking the seat. Marty Madden/The Calvert Recorder.

USM TO ADJUST NONEXEMPT STAFF PAY GRADES: To address wage compression caused by the University System of Maryland raising its minimum wage to $15, the system is planning to adjust nonexempt staff pay scales. Nonexempt, hourly positions within the USM are sorted into “pay grade” categories that denote the minimum amount that role can be paid, the maximum it can be paid, and a midpoint between the two. When the system increased its minimum wage to $15 an hour in January, the four lowest pay grades all had a minimum hourly wage of $15. Johanna Alonso/The Daily Record.

CARROLL SCHOOL BOARD VOTES TO BAN PRIDE, POLITICAL FLAGS: After hours of emotional testimony, the Carroll County school board voted Wednesday to ban the display of political flags, including LGBTQ Pride flags, on school property. Dozens of people, including current students, spoke at the meeting for and against the policy. However, the policy would only affect the school buildings themselves, students would still be allowed to display political materials like Pride flags on their clothing. Tim Swift and Margaret Chadbourn/WBFF-TV News.

MAN ARRESTED OUTSIDE JUSTICE’s HOME: A 26-year-old California man who was arrested early Wednesday morning near Supreme Court Justice Brett Kavanaugh’s house in Chevy Chase has been charged by federal authorities with attempted murder. Soon after, the Montgomery County Emergency Communications Center got a call from the man, who allegedly said he was having suicidal thoughts and that he had a gun in his suitcase, according to the affidavit. The man also allegedly told the 911 call taker that he traveled to Maryland to kill “a specific Supreme Court justice.” Dan Schere/Bethesda Beat.

PAUL WEISENGOFF, FORMER LEGISLATOR, LOBBYIST, DIES AT 89: Paul E. Weisengoff, a former noted Baltimore legislator who served in the General Assembly for 27 years and later became a registered lobbyist for the Maryland Jockey Club and Laurel Racing Association, died of complications from a stroke May 30 at Atlantic General Hospital in Berlin, Worcester County. He was 89. Frederick Rasmussen/The Baltimore Sun.