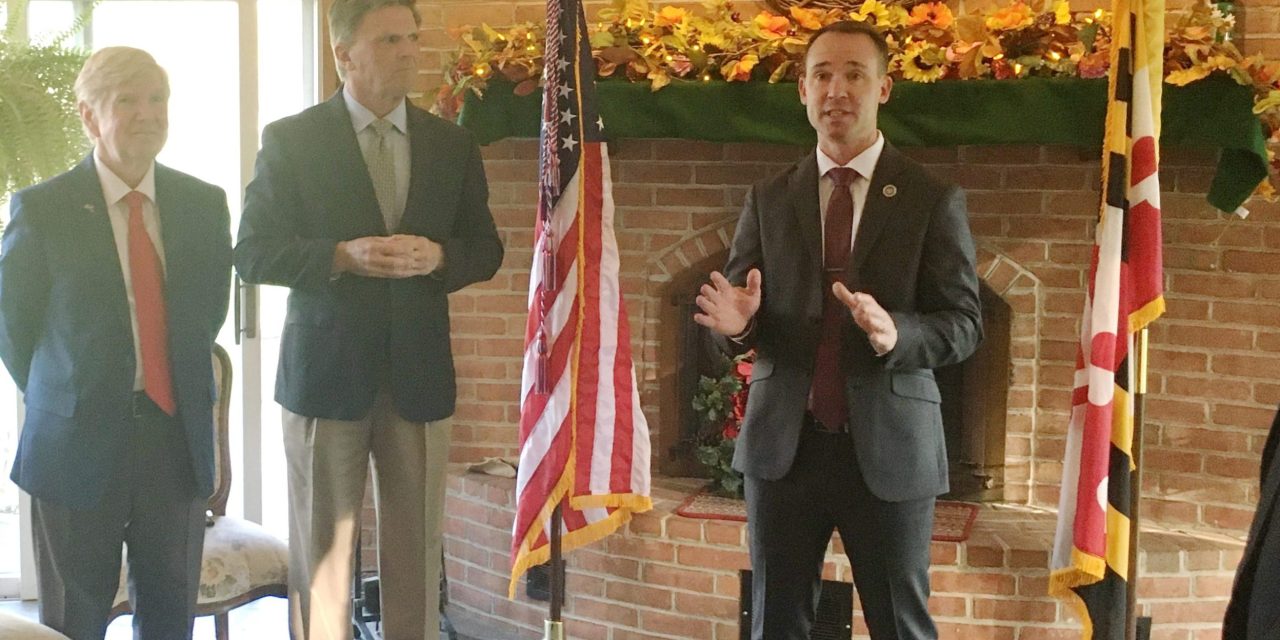 Former Republican Gov. Bob Ehrlich, center, helped Del. Reid Novotny kick off the Montgomery County portion of his State Senate campaign Thursday night at the home of Dennis Melby, left, a member of the MoCo GOP Central Committee. A slice of Montgomery was added to the predominantly Howard County District 9 in the recent redistricting. Novotny is opposing Democrat Sen. Katie Fry Hester in the General Election as she seeks to hold on to the seat she flipped four years ago after decades of Republican control. Neither candidate has a primary opponent. MarylandReporter.com photo by Len Lazarick

HARFORD SHERIFF MUST TURN OVER EVIDENCE TO AG: A Harford County judge ruled Thursday that the county sheriff must turn over all evidence from Saturday’s fatal police shooting of John Raymond Fauver to the Maryland attorney general’s office. The ruling follows a prolonged dispute between the two offices, which began after the passage of state legislation requiring the attorney general’s office to investigate civilian deaths involving police officers. Christine Condon/Baltimore Sun.

POLICE REFORM LEADER CALLS FOR AG TO HAVE POWER TO PROSECUTE POLICE: The sponsor of a 2021 police reform bill says a major priority in the next General Assembly session will be to empower the attorney general to prosecute police officers that he or she alleges are criminally at fault based on the investigation. That prosecutorial authority currently lies with the local state’s attorneys, a prerogative the overwhelming majority of whom were unwilling to relinquish during debate over the original bill and may remain reluctant to cede. Madeleine O’Neill and Steve Lash/The Daily Record.

LOCAL LEADERS EMBRACE NEW BAY BRIDGE OPTION: The state continues long-term planning on how to deal with traffic at the Bay Bridge, and local leaders are advancing a proposal to build a new, eight-lane span that will replace the existing bridge. Bruce DePuyt/Maryland Matters.

MD POLICIES ON GENDER-TRANSITIONING STUDENTS LEAVE OUT PARENTS: As Florida continues to ignite debate about gender identity taught in the schools, Maryland’s state school system has long directed teachers not to inform parents about gender-transitioning students. Since 2015, Maryland State Department of Education guidelines have said public schools have no legal obligation to disclose a transgender or gender nonconforming student’s sexuality to parents.  Sean Salai/The Washington Times.

BALTIMORE CO SUPERINTENDENT WANTS TO STAY ON: Baltimore County School Superintendent Darryl Williams says he would like to stay on as the head of the school system beyond his current contract, which expires in July of next year. Williams has been criticized for his handling of a cyberattack and refusal to answer questions from state lawmakers. John Lee/WYPR.

NEW EDITOR AT FREDERICK DAILY: Former Frederick News-Post city editor Andrew Schotz returned to the paper last week as its new top editor. Schotz, 52, was formerly managing editor for Bethesda Beat, where he oversaw daily news coverage of Montgomery County. He has also held editorial roles at Herald-Mail Media in Hagerstown and for The Gazette in Montgomery County, which shuttered in 2015. Jack Hogan/Frederick News-Post.