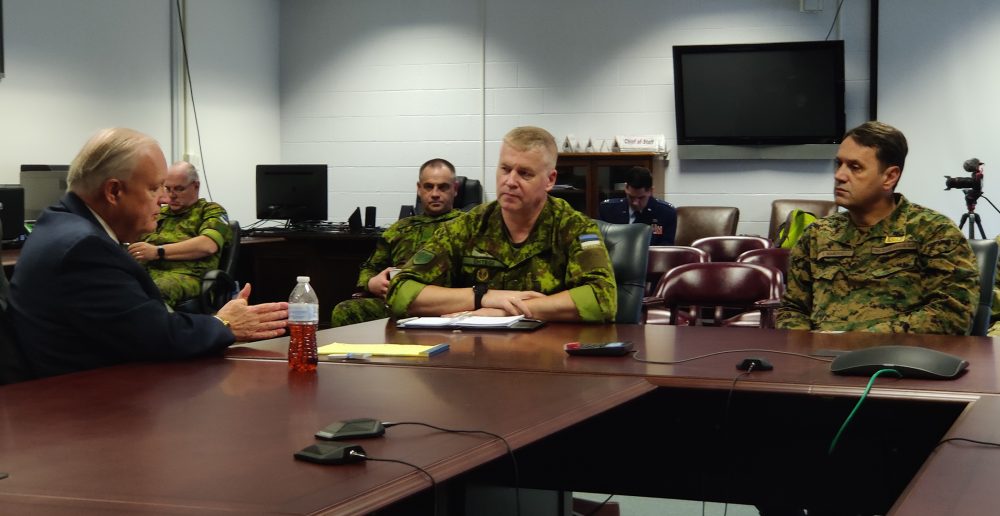 The visit underscored an ongoing military partnership between the state and the two European nations that has taken on additional importance since last month’s Russian invasion of Ukraine. Later this spring, Maryland National Guard soldiers will participate in maneuvers in Europe with their counterparts.

Lt. Gen. Senad Mašovi, the chief of defense for the Armed Forces of Bosnia-Herzegovina, and Brig. Gen. Riho Ühtegi, commander of the Estonian Defense League, and their staffs were briefed on the capabilities of the Maryland National Guard, talked with Pentagon officials, and sat down with representatives of the Maryland Department of Emergency Management.

“We are not partners,” Mašovi told Capital News Service. “We are brothers.”

After the fall of the Soviet Union, the United States developed the State Partnership Program as a way to show former Warsaw Pact nations and newly independent states the benefits of partnering with Western countries.

“The National Guard was a natural partner because we had the benefit of staying in a state and therefore being able to maintain that relationship for a lifetime,” Army Maj. Harrison Bittenbender, the director of the program, explained.

Estonia gained independence from the Soviet Union in 1991. Two years later, the country was paired with the Maryland National Guard.

“In the beginning, of course, we needed a lot of help. Estonia was a new state,” Ühtegi said. “We wanted to build up a Western-type military.”

Estonia joined NATO in 2004. In order to become a NATO member state, a country must be working toward military compatibility – meaning that the country uses equipment and doctrine that is interoperable with other NATO members – a task that the Maryland guard assisted in.

Ühtegi, a former Estonian special forces commander who talked with U.S. Army Special Forces personnel at Fort Bragg, North Carolina, earlier in his visit, said that his first trip abroad as an officer was a state partnership program event 28 years ago.

“So in this time, (the program) was just kind of help,” he said. “But in time, it became more and more like cooperation.”

The Maryland-Estonian partnership turns 30 next year. Estonia shares a 183-mile long border with Russia, which after invading Ukraine made threats against Baltic and Nordic states.

“We are next to Russia,” Ühtegi said. “It makes us even more focused to resist a threat on our borders.”

In a typical year, the Maryland guard’s partnership program conducts 30 to 40 exercises during which a handful of personnel are sent between countries for training. But the COVID pandemic forced a pause to those activities for over a year.

The program resumed in June of last year, several months after Bittenbender assumed the role of program director.

“I was the bilateral affairs officer from 2016 to 2019 in Bosnia-Herzegovina. It was an amazing job,” he said. “When the job to be the director…became available, it was the one job in the state that I was like ‘yes, I am willing to drive from Virginia to come do this job.’”

In May, the Maryland National Guard is deploying a large contingent of personnel to the annual Defender Europe military exercise, where they will be training with their partner countries’ forces.

The exercise, scheduled from May 16 to 27, will include the movement of U.S. division-size force (usually between 10,000 and 15,000 soldiers) with equipment to demonstrate the rapid deployment of combat-ready troops, according to NATO. Locations for the exercises will be Albania, Estonia, Germany, Latvia, Lithuania, Poland, Slovakia and Slovenia.

“It’s significant to SPP, because we’re exercising with our partner,” Bittenbender said. “Anytime we can work with the Estonians or the Bosnians is a plus.”

The Maryland-Bosnian partnership was established in 2003.

Mašovi said that his visit with the national guard and Pentagon officials was fruitful. He said he views the Maryland guard as a credible partner that, through continued cooperation, has created a strong level of trust.

A reception ceremony was held at Camp Fretterd Thursday evening and Maryland Gov. Larry Hogan was in attendance.

“In recent weeks, we have again been reminded of exactly why strong ties and alliances like this are so critical,” Hogan said. “We have worked together closely all these years – conducting training exercises and building an enduring partnership – to be prepared to help ensure stability and democracy through uncertain and dangerous times.”

Board of Public Works approves old DJS contracts, but is not happy about it

Md. officials count undocumented immigrants as uninsured for health care, but none qualify for Obamacare