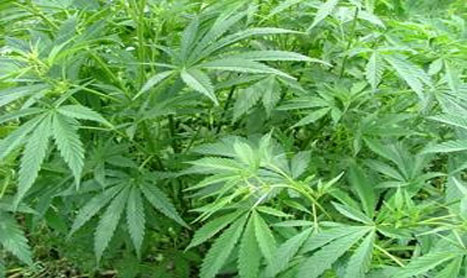 A bill to allow voters to decide in November whether they want recreational cannabis to be legal now needs Republican Gov. Larry Hogan's signature to be implemented. (Courtesy Photo)

ANNAPOLIS – Only Republican Gov. Larry Hogan’s signature Friday stood between Maryland voters and their ability to decide in a November referendum whether recreational cannabis should be legal in Maryland, after the Senate passed a bill giving them that opportunity Friday morning.

The bill (HB1), passed over Republican objections. It was previously approved by the House, so now it awaits Hogan’s signature. It would permit voters to decide whether to amend the Maryland Constitution to legalize recreational cannabis.

The General Assembly also sent another, more extensive, cannabis legalization bill (HB837) to the governor’s desk Friday. It would legalize marijuana for personal use, establish funds to repair communities negatively impacted by criminalization of the drug and authorize the Maryland Medical Cannabis Commission to study and report annually on the long-term effects of marijuana use.

It also allows those convicted under previous cannabis possession laws to ask for their records to be expunged and, in some cases, could mean the release of prisoners convicted solely on cannabis charges.

The legalization provisions in the bill are contingent on voters approving the referendum to legalize marijuana.

Sen. Jill P. Carter, D-Montgomery, said the bill doesn’t do enough to repair the harm done to communities damaged by decades of criminalization.

“I philosophically favor the legalization of recreational adult-use marijuana, however, I can’t in good conscience vote for a bill that favors the wealthy but doesn’t create adequate repair restorations for those damaged people,” Carter said Friday in the Senate. “A wise man once said that if you stick a knife in a person’s back nine inches and then pull it out six inches, you’re not doing them any favors.”

The bills don’t lay out any framework for market structure or licensing, and the sponsor of both bills, Del. Luke Clippinger, D-Baltimore, told Capital News Service that that work would come next session.

“I think that we have a long way yet to go,” Clippinger said. “One of the issues is figuring out how we can help communities that have been disenfranchised and disempowered by the criminalization of cannabis. That’s the next step.”

Senate President Bill Ferguson, D-Baltimore, emphasized during a press conference Friday afternoon following the vote the importance of a disparity study before any further work could be done regarding market structure and licensing.

“Putting $40 million into a fund to assist communities that have been impacted by the war on drugs, trying to decriminalize the civil possession of marijuana, these are things that have been stuck,” Ferguson said, “and now we’re moving forward.”

“I just don’t think it should be in the constitution,” Jennings said. “I just ask, ‘Why?’”

Hough said whether recreational cannabis becomes legal in Maryland should be up to legislators, not voters.

“People elect us to make decisions,” he said.  “It’s a bad precedent.”

The process to begin legal sports betting is still ongoing.

“We’re going right back down that rabbit hole,” Cassilly said.

In response to Cassilly, Sen. Brian J. Feldman, D-Montgomery, said legislators were making use of the process that was available to them.

“In order for us to have the input of the citizens of our state, this is the mechanism available for the legislature to do it,” said Feldman, a supporter of the legislation.“This is actually quite common, to let the foks of our state weigh in before we take the next step.”

In other locations, like the District of Columbia and Virginia, cannabis cannot be sold commercially. It can be used personally and can be gifted in limited amounts.