LAWMAKERS SCRAMBLE TO GET CLIMATE BILL TO HOGAN’s DESK: The Maryland House of Delegates passed an amended version of landmark climate legislation Tuesday, setting legislators scrambling to get the bill to Republican Gov. Larry Hogan by Friday to allow time for a possible veto override. Stephen Neukam of Capital News Service/Maryland Reporter. 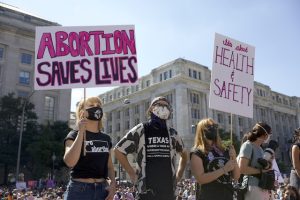 SWEEPING CHANGES TO ABORTION LAW PASSES: In the most sweeping change to Maryland’s abortion laws in three decades, state lawmakers passed a bill Tuesday that would dramatically expand who could perform abortions and forbid most insurers from charging patients out-of-pocket costs for the procedure. Ovetta Wiggins and Erin Cox/The Washington Post.

SENATE PANEL OKs BILL TO LEGALIZE SMALL AMOUNTS OF WEED: The Senate Finance Committee approved a measure Tuesday that would add Maryland to the growing list of states that have legalized small amounts of cannabis. The measure would take effect only if voters approve a related ballot question this fall. Bruce DePuyt/Maryland Matters.

WOMEN SEEK TO IMPROVE STANDING ON MO CO COUNCIL: After a disappointing showing for women four years ago in the Montgomery County Council race, candidates and party leaders are hoping for stronger results in 2022. Women account for 51.6% of the county’s population. Yet, since 2018, there has been only one woman, Nancy Navarro, among the nine seats on the council. The number has dropped since 2009, when Navarro was first elected and was among four women on the council. Women have never held more than four seats at once. Dan Schere/Bethesda Beat.

MOSBYS’ USE OF WAR CHEST FOR DEFENSE OK, BOARD SAYS: The use of campaign funds for the legal defense of both Baltimore State’s Attorney Marilyn Mosby and City Council President Nick Mosby did not violate state election law, according to a decision from the Maryland State Board of Elections. Emily Opilo/The Baltimore Sun.

MARYLAND MAN PLEADS GUILTY IN CAPITOL RIOT: A Maryland man who waved a Confederate flag attached to a lacrosse stick during the siege at the U.S. Capitol pleaded guilty on Tuesday to interfering with a police officer who was trying to disperse a crowd of rioters. Michael Kunzelman/The Associated Press.